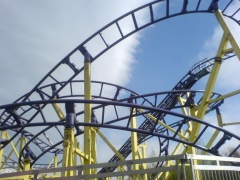 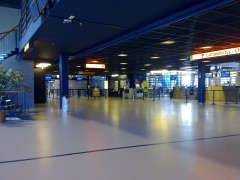 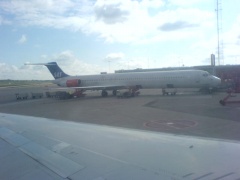 What happens when one embarks on a travel past the Gulf of Bothnia? Well they arrive in either Finland, Estonia, Latvia, or Lithuania; the former is the destination of choice. After chilling awhile in Uppsala and having some “interesting” times (in other words dramamatic) I woke myself up early one morning to get to the airport in Arlanda. Having showered and took my time, of course I ended up being late to the train station for the Upptåget, and subsequently fearing that I would eventually miss my check in (once again) and it would all go to hell. Turns out to make matter worse, the train only goes once per hour instead of twice or three times because it was Ascention day. Damn you Jesus, or whatever we are celebrating.

So I arrived at Arlanda, after having bought an incorrect ticket and blah blah blah, and ran to the auto-check in. Turns out it only takes like 5 seconds to do it all so I chilled in Duty-Free and eyed some things that I may or may not take back to Canada / USA. 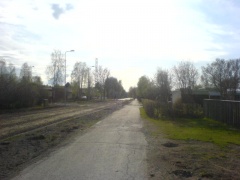 So I arrived to the terminals and we waited, and then we got to Helsinki and as proposed, I had a lunch-date with Tobias, in other words the nearly-famous friend of mine who was the Swedish Language YLE commentator this year in Moscow, in other words Eurovision! Go team him; so we chatted and I ate the first meal of the week (basically) and then I got lost finding the domestic terminal. Tobson warned me that it wouldn’t take long, and low and behold the security check took less than 2 minutes (no joking at all). There were 10 people working at the domestic FInland terminal, and I was the sole person there, only one in the terminal for the next hour. Serves me right for being ahead of schedule, bwhaha! 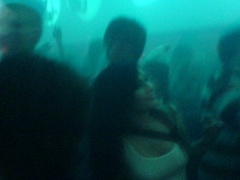 Anyways, I got into Oulu in the afternoon and, despite massive crowds from all the flights from Helsinki and baggage left overs, I found my host and we got on the bus. Awkward handshake, Finnish style, for the person for whom I would give my life. Despite all that we got on the bus and headed into Oulu-proper, or Koskela, where he lives, for a party. Shower, dressed, organisation, and we were off to Jenni and a group of new friends I call the “Oulu Groupies” to celebrate the ascention of some saint, or son of God, and more importantly a concert of Darude!

If you don’t know who Darude is, then you can either inform yourself, or drop dead right there. He’s a DJ that released a highly popularised remix-song called Sandstorm. Everyone knows it, just they don’t know who did it! Tragic for them because it’s real class! We went to Jenni’s, we got a little tipsy, and everyone’s English improved greatly after the shy-awkward stage. I chilled with the funny and chatty Noora, and Katariina (who spoke near-perfect English!), and of course my host, Elina, the stunning Jaako, the flower-pretty Jenni, and her gorgeous friend Jennika, and of course the boyfriends, charming Niko, and Juha-Matti. I either named everyone or possibly forgot Katariina’s boyfriend’s name. It’s difficult to remember damnit. Also, props to Finns for producing very tasty sugary cider (way better than the French kind!).

We sang some Eurovision songs and chatted about who was hot and who was not, bwahha, and then we went downtown with the full 10pm sunlight, to the lovely disco-club Odessa, a Finnish chain with places all over the country. We chilled in, coat-checked, and then got-a-dancin’ to the sort of lame DJ. It was lame for about 30 minutes, and then the most amazing things happened. 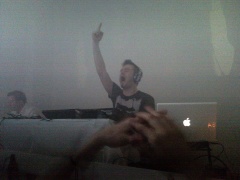 We were dancing, and someone bumped into me and I just shrugged it off (having lived in France and being used to it), and then Jennika brought it to my attention that it was Darude that bumped into me. I nearly fell over, and then took a look around and loved how Scandinavians are all about space. They throw their bags in the centre, and they dance like they are crazy. Even Jaako was dancing!

The crowd thickened, and Darude started to play. We were in the middle, and slowly and surely we made our way up to the front where we were rocking with the best of them. The “concert” was absolutly amazing, and then since we were in Oulu and it’s Finland, and basically have 5 million people in the entire country, stars are very accessible. People started gathering for autographs and to talk to him, so I decided to jump on the bandwagon, and I’m glad I did. I got some photos, and then spoke with him. He was surprised that I was in Oulu and even more surprised that I was going back to Toronto in a week. He asked for my name, gave me his e-mail address and info and asked me to contact him so that he could get me on the VIP list in Toronto at the Courthouse. Oh yes, that’s true and I’m awesome. Go me! I just about died, and hugged everyone around me cause it’s like the first time I ever met someone famous, at least internationally! 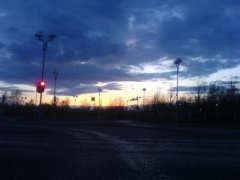 The night ended after a few hours, and we went to get some pizza while the sun was still up (as it doesn’t set), and we got chatted up by some drunk people and walked the 5km home to his flat. We slept like rocks, clearly. It was one of the greater days of my life!