Something happened to me tonight that makes me very, feeling strange I would say. It was an Erasmus night, and of course the others wanted to go out. We went to a Lebenese resteraunt and had a fun time, minus me, and then we met Mattchew, Mathilde, Mathieu et al. at a bar, where I leaned against a corner and was awkward as always.

Mathieu showed no interest in talking to me. This left me gutted.

Did something rude, didn’t say goodnight, went home and with Audrey ran into someone crying on the street. It was an 18 year old who is manic depressive and who got abandoned by his friends. We spoke with him for a few minutes and made him smile, and got him to go home where it would be good. This situation made me realise what I am, and what I’m not. I’m not a good enough person for anything, and it makes me feel even worse than I do already (which is pretty bad in comparison).

Apart from that, I’ve come home, walking the slowest ever walked by me since I was 4 years old, can’t seem to get over it, and have decided that I’m going into total isolation. Turning my phone off (not like anyone is going to call it..) and not being seen by anyone other than my students.

I don’t have enough energy to be around people, and what bothers me the most is when the perfect people exclude you, and then use their sweetness and kindness to make it seem like it wasn’t intended. The next time I’m left somewhere, I’m leaving without letting anyone know. One day I’ll disappear and I hope people freak out and I ruin their time, like they ruin mine.

Thursday night we had a themed night where Dan (or not) organised a bunch of events at Le Java, Le Brasseur, and La Salamandre; basically a binge drinking night… how could he possibly go wrong with all the British students. It was the Erasmus challenge, and since I’m an Erasmoooose I participated and kicked some major ass.. Here’s the challenge list. Please not that I only participated on team yellow as arrival at Brasseur was due to choir practice.

1) Glowstick Challenge
If someone drops a glow stick in your drink you have to down it, and then pass it on

This turned out to be quite dangerous as the glowstick was passed around in the process of about 5 minutes in about 10 different peoples drinks. Result? Drunken-ness before people wanted to be, so much for taking it easy on a night there, Kate! 😉

2) Roxanne
When Roxanne comes on, girls drink on “Roxanne” and boys drink on “Red Light”, it’s harder than it sounds!

I don’t think this happend because the manager of Java didn’t notify the staff of the organised event, so it was a flop.

4) Photo Challenge
All members of your team must be photographed doing at least one of the following:
At Java

Explinations and photos? Clearly a must! Since I wasn’t at Java I didn’t do any of the first things, but I got my share of exciting photos for the others. I rode the Buddha Statue, photo to be shown later when Facebook pictures arise. We couldn’t do a pyramid since the team was just Matt and I, so we just piggy backed instead halfway there; go team!

What could we do on the bridge, I reckoned… Titanic of course, so I was Kate Winslet and I cried “I’m flying Jack” terribly embarrassing but I couldn’t care less! I think that this woman passing buy actually spoke English; therefore very embarrassing! Nudity eh? Since I’m prude that wasn’t going to happen, but once we got into Salamandre there are some photos of me floating around with my mid-drift showing, none of which will be posted here since I don’t want all my random readers to have orgasms because of my amazing body (har har har)… 😛 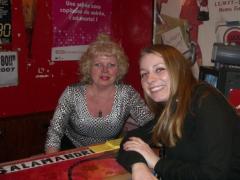 Here is Matt and Becky with Danielle, the lovely woman who takes our money! She’s really nice and even gives us water when we are far too drunk to walk home or to get to the bakery at the hour of 4 in the morning!

Thats us doing caramel vodka shots; they are surprisingly good and once you have one you’re hooked. We could get four shots for 10€ so we each bought a round, greatest idea ever! The barman didn’t notice me though, so I had to get a girl with huge tits to stand next to me and get attention! I know, I’m smart! That’s me “passed out” but really I’m faking for the photo!

Don’t be alarmed, it’s just a trick of the camera as we are just sucking on our thumbs, but still it was a great idea and we just about “kissed” everyone that night. Becky really got around, ha ha ha. This last photo is scandelous only because of the fact that Martin is gay, really gay; and he was making out with her all night. He was horrified the morning after to see the photos of all the action he got, and because of that this photo deserves to be posted publically. Just be thankful that you don’t get to see him dancing, because that’s probably more sexual than the homo on hetero kissing!

So this all meant that I walked home and was dizzy, but had a deep conversation with Scott about shallow people; for example him. And apparently I’m vain according to Matt? I reckon he just said that because I told him the shirt he had on had a hole on it, honestly it did and I was just looking out for his social wellbeing!