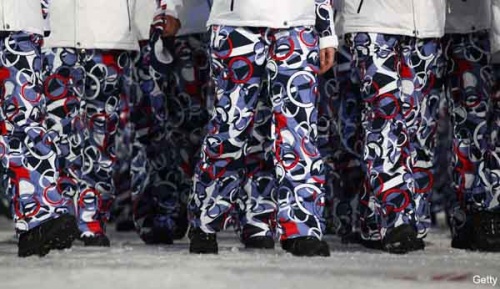 For anyone that knows me, they would know that during the Opening Ceremonies of the Olympic Games in Vancouver, the Parade of Athletes is by far the best part. Further to this, seeing the clothing that they are wearing is great.

Words can’t describe my love for the Czech Olympic Team’s Trousers, which make me really happy.

Where and how can I get them? Please share, in the meantime I’ll drool at the current design above.

For all those who had no idea that I was embarking on a journey, surprise. For all those who already had known; sorry for the redundant nature of my writing but I’m writing about it anyways! I had been talking to Matt for awhile, and decided that it would be cool to go and visit him as he moved to Prague, Czech Republic back in January / February with his company from the UK. I was going to go the weekend before, but he was ill and had other company over, so it worked out better this last weekend. I found great flight deal, thanks Lufthansa, despite being sort of worried about not having any linguistic background. I tend to get nervous in those situations; paranoid really but that’s just a character trait already.

My flight left at a reasonable hour from Stuttgart, so I had all morning to get there without having to worry about sleeping in the airport (for the 6th time). I left on the 07.00 train to get there for 09.00 leaving me a few hours at the airport to eat, relax, and go through security. Turned out to be perfect timing since checking in / security lasts about 10 minutes, the rest was just reading the news that I collected on the way. The train to Stuttgart, bound for München was oddly filled especially after Karshrue stop, not surprising as it’s always a huge stop for some reason. All the businessmen got off at Stuttgart though, so I felt like one of them, despite being dressed a great deal less nice than them.

Hopped off the train, wandered down to get a bagel and then went to the S-Bahn to get to the airport, of which was empty and quiet during the morning hours (in other words, it was great). Automatic check-ins are my friend, just now I need to have a larger credit on my card so I can actually buy tickets with my own credit-card. In the waiting area, I shared the normal Zürich area, and a flight going to Romania so there were tons of really different looking nationalities. None of the people going on my flight to Czech Republic were actually Czech, kinda funny!

The flight was quick, up-down-1-hour, and I was in the nations capitol with a backpack and a bunch of Czech Krona and didn’t know where to wait. I had to wait until around 17.00 until Matt got off of work, and I would meet him downtown somewhere which was unarranged. I could have stayed in the luggage pick up area but I didn’t want to get arrsested by the guards, plus there was more going on in the arrivals area. In other words I saw a group of Canadians who were traveling for footie, a bunch of Danish missionaries collecting their people from Danish flight; and even some Finns who were arriving from Helsinki. There was also this group of Asians (from I think Cambodia) who were dodgy and hanging out there nearly as long as I did.

I tried to sleep, listen to music, but it was really boring and I had a lot of time to kill. About five hours in any case, but it’s all good (better than wandering a city alone). I was originally going to take a shuttle bus, but since I was bored I embarked on a public-transport journey, so a bus to metro then metro to downtown. At only 20:- it was a great deal, that means that it was about 0.80 (love it). The bus was crowded with Czech people who were staring at me, cause obviously I am not as amazingly attractive as the Eastern Europeans, plus they were probably just curious. The metro was packed, so I was paranoid about being mugged or raped or something, but all went well. I followed some guy who seemed to know where he was going, so when he got off, luckily it was the same place. I didn’t speak any Czech so I had no idea how to say “excuse me”, turns out to be simplier than I had originally thought!

Got to Můstek station, the apparently largest one in the city, and then wandered to the street where I could be “spotted” and called Matt. I stayed put since I thought it was the best idea, and then gave semi-helpful descriptions as to where I was. And arrived he came after a few minutes, dressed up in his smart work uniform where he’s not seen, but must look best due to “company image.” Sounds pretty funny to me, but I would like it, I love dressing up in nice clothes as it makes me feel a lot better about myself. Plus I look hawt in a tie, anways.

So we headed to his flat, which had a front door entrance with those old fashioned keys (awesome) and then six flights of stairs which really is about ten flights of stairs due to high ceilings. His loft is amazingly nice and wooden, with skylights; in other words I was highly impressed. The hot weather had us pooped so we relaxed for a few minutes before deciding that we would go for some snacky-foods at a bar. As most people can gather from my social retardedness, bars are sort of weird for me, but it was okay cause we got nachos and just chatted. I think I’m just a little more put off by bars and pubs because they are usually fulled but at the hour of 19.00 it was quite nicely emptied.

We walked around for awhile after that just to orientate me with the general area, but lack of structure or direction worries Matt. I go with the flow, so turning down random streets doesn’t bother me at all. As a side note I nearly stalked someone who walked by; I can’t help it if some people are attractive. But since I’m not a stalker, I restrained of course (I’m awesome). I saw gypsies but I didn’t realise they were them, so I was confused but oh well! We floated some more and then decided to go to a very Czech place for dinner, it was quite late but amazing. It’s a nice resteraunt, a lot nicer than I had expected but we had to wait whilst the waiter fixed some problem and then we got a nice little window seat in a room that was nearly empty apart from a little business meeting in the corner.

Our food was amazing, I had milled carp, a very Czech dish with patotoes and bacon on the side. There was a weird sause on the fish which I thought might have tomatoes in it, so there was a bit of a scare; and all ended well after it turned out to have none in them. Maybe a raddish sause Matt thought? I wouldn’t know, I’m bad with tastes, but the result is that I didn’t die, which we were both really happy about. If we had to call an ambulance I and he would have no idea what to say. Chances are they wouldn’t have spoken English! I was flattered and felt guilty after leaving, even after a nice evening of calm conversation and followed by C.S.I. episode watching.

I felt like I had been there for a lot longer than I was, but I guess that’s just how great I seem to get along with some / most people. The social bufferfly wings had spread! And after some that episode, and falling asleep serveral times during V for Vendetta (his favourite film) we went to bed. The film was really good, but I seemed to have missed some parts after dozing off. I denied all such things at first, but apparently it’s true, I know that I closed my eyes for some time, just unknowing the duration of such naps. Again I felt bad, but it’s okay and understandable as I was quite tired after the few hours of traveling and then five hours waiting around in a airport!

First impressions of Prague, were great; very touristy, very nice, friendly people, and lots of nice archetecture. And as a side note, there is nothing wrong with having a SmartCar as a dream car. We passed this building that I claimed looking like a opera house, we laughed, but days later it turns out to actually had been one. Go me! I’ve got a good eye for types of buildings!