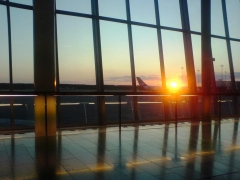 So we ran over to the train station and I decided to take the train cause we were short on time, and I ran there and said goodbye to Daniel my favourite friend from Stockholm to whom it’s the second time I was lucky enough to hang out with! I ran from the terminal into the building because I was really short for time at this point, and I ran to the KLM area to sign in and so the panic began.

She asked me what flight I was on, I said to Amsterdam in 45 minutes. She said “What?? Are you crazy?” And I said of course I wasn’t and that I was here within the 40 minute window allowed for checking in. She told me that she had to call someone to see if they could take my luggage; and she was on the phone for 10 minutes waiting so they couldn’t take my luggage and therefore denied my boarding. I looked at her and asked if she was serious. It was her fault that it took so long, and there wasn’t even anyone in the terminal. She told me to vacate the area and to go over to the lineup across the hall to get a new ticket.

I was livid, I called Tony told him and sent an sms to Daniel letting him know. I figured I’d have to stay over another night, but we’d see. I waited for 2 hours in the line because a woman was arguging with the nice Swedish man, and when I got up there I presented him with the facts and there wasn’t anything that I could do to get to Paris, Frankfurt, Strasbourg, Geneva, Basel, Zürich or anywhere close to Strasbourg, so I went over to sit down and be stressed. It was all such a huge problem because I had to get home before Thursday and it’s going to be Wednesday when I get home now, so that I can move out of my flat on time. And then figure out where I was going to go or how to get home. I was scared.

I went over to the internet terminal and the machine was broken. The good looking Russian guy that was working on the computers came over to try to unjam the machine but it took 20 minutes and he eventually gave me 400:- worth of internet time, it was awesome. So I looked all afternoon for flights and how I could get home. Cheapest thing I could find for the next day was about 500€ and leaving in the morning. I said fine, bought it with my credit card and managed to get it all in the with my low credit; and then had to sleep at the airport again. I sat around for awhile reading and then I went to this italian resteraunt in the terminal to see the funniest thing I’ve ever seen in my entire life.

I walked in and ordered my stuff and sat down and then these two younger women were laughing and pointing at this family. There were about 100 people in the entire terminal so it was soo quiet and empty with the sun hovering still at 20.00. I looked over and what I thought to be a man was with two children coming to sit down. Now what the guy was wearing was wow. I had to cough up what I was chewing because I was so flustered. He had on this sleeveless top that was fishnet, going halfway through his middrift, and then a jock-strap looking pair of underwear that were visible above the jeans line because his jeans were below his pelvic bone exposing, well quite a lot. After he turned around, the jock-strap like band went around and a single tiny string went down below his bum, so I was thinking, wow with nothing in the front connecting, and only a string in the back what the hell is this guy wearing?

I thought to myself, poor kids, and they didn’t seem phased. But they were at an airport so I was just confused. Was he a drunk man with children? Was he a go-go boy who was grossly overweight and hairy? Was he a transvestite? Was he a transexual? Quite frankly I thought it was a woman when I looked at him because he had very effeminate eyes and chin, but it was a man forsure; especially with the body hair. I didn’t know what to say and laughed to myself the whole time hoping to never see anything so disgusting again in my life.

And so I went to lay down on the benches, I went through about 50 pages of Form i Fokus doing my grammar before my pencil ran out. I had to go and steal a pen from the cleaning lady when she wasn’t looking in the terminal building, I felt horrible but I needed something to write with as everything was closed. I layed down and watched a film on the lappy and then fell asleep with my stuff sprawled out. The view around 22.00 is available in the photo above as seen when I was falling asleep. I feel so comfortable and safe in Arlanda airport that I didn’t even hold onto my luggage, it was just laying there with my shoes and stuff off whilst I slept.

Flight was at 6am the next morning so I was up at 4am finding the Norwegian guy beside me huddling around his things. The Norwegians are always so weird; but it’s funny. The lineup was so long I thought I wasn’t going to make it, but I got my luggage through and the lineup for security was ridiculus. It was about 1’000 people minimum, so the wait was awhile. This guy was coming around seeing boarding passes and telling people to go over to the other one for later flights but it went quicker than I thought it would. I made it just in time as they were calling for final call as I walked up to the gate, right inside of security. I was thinking to myself; why is Arlanda always so bad to me? That’s two missed flights and therefore a sign. Sweden is telling me not to leave, and I really shouldn’t have!

Flight to Amsterdam was fine, but EVERYONE had connecting flights and was in a rush because some people had to have luggage offloaded having not made the flight (lucky me). The woman next to me was going to Cape Town, I was jealous. And so I ran to make my connection and all was fine and KLM took care of me. I was terribly bitter about paying 500€ though but I had to get home damnit! Turns out Air France overcharged me anyways so I have to sort that out.

I packed all the next hours and my room was nearly ready to move out the next day, one day early. Midsommar in Sweden was amazing, and I swear I’m taking that sign to heart. I’m moving there somehow someday soon, I just need to find someone Swedish to marry me to make it easier first.

Any takers? Or even someone I can co-habitate with for 2 years? I’ll love you forever and ever; and I swear I’m clean and house-trained!