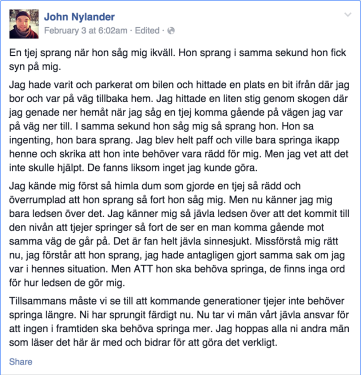 Riddled across Swedish social media, I couldn’t help but weigh in on this delicate issue of sexism. Why would a woman run from a man, who seemingly was not in any way alarming, while walking in a forest? The obvious conclusion that one jumps to is fear of rape, but really given the statistics for male vs. female assault (whether sexual or otherwise) gives room for doubt that a fear is statistically valid.

While it’s anyones right at any time to feel fear for such a situation, it’s not realistic in my opinion, and it’s actually quite sexist against men to think that. The feminist train has been boarded by millions of people, myself included, but when it turns into something that potentially affect me due to me just being a man, I start to reflect on it a little bit.

I’m as threatening as a butterfly, and would I be offended if a woman ran away from me in the same way? Of course I would be offended. It’s blind assumption that I’m a bad person, and in the same way that woman have demanded equality and to be treated respectfully, how is it respectful that a woman treats a man in this way? It’s sad that minds wander to rape-mongering, but it’s a valid debate that needs to be had. The sad result will be that anything that goes against the feminist movement would be viewed as misogynous.

What’s ironic about the situation is that, if anything, I’d be considered slightly on the misandrist side and defending the male gender like I’m doing feels unnatural.

Despite all of this the first reaction that I felt when I read the reaction is: how do I feel in this situation? Every day I walk out of my door and wonder if it will be another day when I’m assaulted. Knowing that my existence is a bit “outside the box” compared to most, means that I live in constant alertness for possibilities of onslaught of negative attention.

So internet trolls beware, it’s not just women that fear persecution or for their safety!