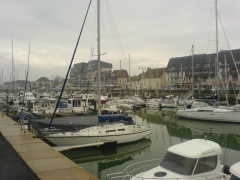 I was obliged by a Canadian Couchsurfer that stayed with me, Kyle, to got to the place of his wishes and where his ancestors gave their lives. Nearly a half century ago, the Second World War went on, and on June 6th 1944 the Allied forces arrived on the D-Day beaches of Normandy. Each beach is code-named after it’s plan, and is divided by nationality. Juno was the beach of the Canadians, and thus that’s where we went. Since he doesn’t speak French, and is really not a very interesting person in any respects, it was an awkward day-trip, but I made the most of it.

To get to the beaches, which are located in Courceulles-sur-Mer, northward of Caen, we had to take BusVert de Calvados, which only costed us 2.90 each way. What a great fare, in my opinion. An hour later, we arrived in the gloomy and nearly-rain ridden town, and explored our way into the centre to find the Juno Beach Centre, a monument-museum that is run by Canadians to outine the history of Juno Beach, and general Candian history. We didn’t go in, because Kyle is cheap and it costed 12 to go, but we explored the beaches regardless. Monuments were scattered everywhere, and there was nobody around (being off-season and all).

Call me purple and name me shotty, but there was something there that shocked me, and drew me in quickly. I bet a lot of money that this is the only Inukshuk in France, it must be. It’s impossible to think that they are found elsewhere. Kyle had no idea what it was, so I chalked it up to being an uncultured-stupid-punk Canadian, sort of like a stupid American in a way, either way something I don’t like, and continued on. The idea wa to see the stuff and make it back to Caen in time for him to go to Paris again. I welcomed this with open arms. 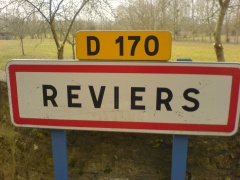 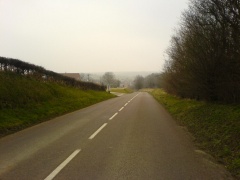 Since what we wanted to visit was a Canadian War Cemetery in a tiny little village, with no bus service, I decided on our part to take a long walk into a little village on foot to see what we came for. I was excited, with my sense of adventurism that is oh so rare, but armed with a self-drawn map I lead the way of the straggly Canadian. Travelling nearly 4km into Réviers from Courceulles-sur-Mer, and then another 2km East to Bény-sur-Mer, left us in the middle of nowhere, with a man-made forest which surrounded the symmetrically planned grave-site. 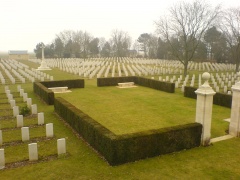 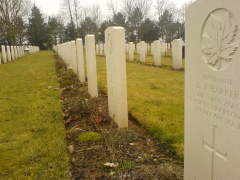 Armed with my camera-phone, we explored the site. I signed the registry, which Kyle refused to do. I’m going to comment on this because it kind of bothers me. What is the big deal? Do you think that the government is going to stalk you by reading a little book in a cemetery in the middle of nowhere (literally)? Get over yourself. It’s respectful and helpful to show the work that’s put into the site is appreciated. Take your ghetto-punk-ass and get yourself some education and respect for people who freed the world you see today. Grow up, also. 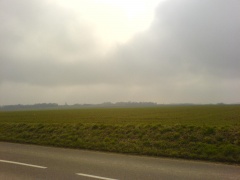 We waited for a bus which never came, because I failed to realise that it was summer schedule, and it’s so clearly winter, but we made our way back the same route. The tourist office laughed at us when we said we would walk there, but it really wasn’t such a big deal. We didn’t talk the entire way back into the village, because it was awkward and I wasn’t happy with his company nor what he had to say. The photograph above explains French-countryside, which is nothing, quite literally. We arrived back into the town, I bought some stuff from the HyperChampion, and Kyle almost got arrested for being dodgy-looking and having rubbish in his bag of something he bought in Paris. Basically they thought that he was a thief. I almost wanted them to arrest him, just to get a good laugh, but we got out after I was obliged to be a translator (not impressive for someone you’re awkward around!) We found our way back into the village and got our bus back (which was non-spoken). I crossed some friends on the way, then went back to the train station to drop him off, stress was relieved and then the journey was done.

Note to self, no more Americans or Candians, yes?! 🙂