The next few days were spent walking around Marseille, eating wonderful food, and visiting friends and family. It was a nice break from jumping all over the place. We visited Thérèse in her comfy apartment which clearly I will never be able to afford, and walked around Marseille and some small little areas. We went to God-mother’s house for lunch one day, and it turned out to be quite the lovely day. It was a heavy pasta lunch, topped off with talking about inappropriate topics such as sex lives, and playing techno music at their wedding. No jokes!

We came home again and relaxed some more, always being in such lovely company, and on the eve of our return back to Saint-Étienne, Frederique and Fabrice, friends of course, had wanted to go to karaoke. So we went out, Angès joined us. The name of the bar was the Coco bongo or something along those lines, on the boardwalk of Marseille. We listened to some people sing, butcher English, French and Italian songs, and then Angès decided to sing “Like a Virgin” by Madonna. Dear Lord Help Us. I know the words, I don’t know the tune. Angès knows the tune, but doesn’t speak any English. It proved quite the experience as we struggled through. We arrived quite late into the night after doing several rounds to pick Agnès up, but we arrived home, I packed up most of my things knowing that we were leaving the next day.

The final day was everyone getting packed up and finding some godly way to get all of our stuff into Cédric’s little car. We managed, magically. We were on the home stretch back to Marseille, and things were getting quite chilly. We stopped and changed drivers and managed to get into Saint Étienne at about dinner time. There waiting were a group of girls from Cédric’s Aïkido club, which were all having a stage there and he’d lent them his apartment. He’s moved since last time, bought his new apartment which is lovely and in a nice quiet area of the city. It need major decoration help, which I’m sure will come with time. The girls prepared some dinner and I awkwardly got on with Sylvaine, Cloë, and Madelaine. 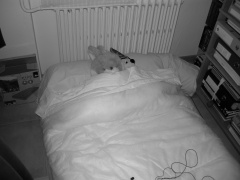 We got my bed ready, and I fixed Cédric’s computer or him. Take special note of the fact that I was 1) proposed to tri-marry, 2) proposed to become resident IT-guy, and 3) proposed to move right in when available. I won’t hold them to this, but the prospect could result in future happiness on my part. I watched some X-men films before going to bed, and with Cédric’s stuffed animals cuddled close, I managed to get some sleep. Why did I get the stuffies? Because I’m horribly lonely of course!