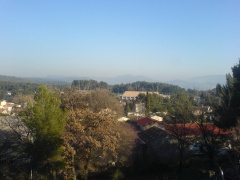 For the umpteenth time since I’ve arrived, the sun is nice and golden in the morning. It brings warmth into my room even though the windows are closed and everyone here is freezing. Luckily for me I’m used to the cold weather, so it’s not a problem for me and it’s basically paradise. I’ve slept in again, which is no surprise considering how tired I am (despite not actually realising it until I’m on vacation). We ate, and prepared our things for the day. Cédric decided that it would be worth the visit to go into the french version of a fjörd, and do a little tour of the towns. 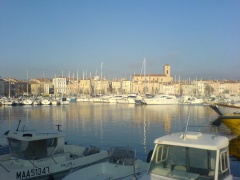 We had our lunch, and relaxed a little bit and off we were to explore the wide Provençal region! We started by driving to La Ciotat, which is a nice little coastal village where people are nice and there are palm trees. I shit you not, there are palm trees, I took photos to prove it to myself when I’m old and rippled (in other words in about two years). We walked along the boardwalk, and it seemed that we arrived on a really interesting day because once we went walking down the main strip we encountered, low and behold, a little concert band parade. Seriously, there were people dressed up as snow men and other miscellaneous characters with a little band singing, dancing, and moving along. I have a video which I may or may not post in order to prove the craziness that French people contain. I was very amused, it was so awesome it made me nearly cry from laughter. 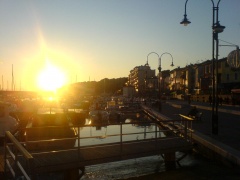 We climbed the mountain, in car of course. Lord knows that it would probably kill Cédric, and probably me also, but we stopped along the way to see the beautiful mountain views, listen to the people from Aquitaine struggle to speak French, and then the fat German tourists that flooded the mountain that led down to the chic village of Cassis. After getting sort of lost in trying to get into the pathetic (yet cute) attempt at a French Fjörd, we managed to steal parking from an ugly wannabe person that was at the port. It’s a small town with a casino and is not too shabby. We went along the boardwalk, and as I wondered as to whether or not I’d ever have enough money to live in a nice place like this, we stared at the posh people trying to flaunt their riches to us. I just stared at them back, and this caused them to be embarrassed and run away. I managed to get back to the car without being molested, at least not by strangers.

Our next destination was Aubagne, which is a little village where Cédric and Agnès were born! It’s where they lived when they were children before they went to Cadolive. We parked outside Céd’s old house, and went into the lighted city discussing whether or not it would be better to be dating a farmer, butcher, or baker. I choose baker, or farmer. Why you say? It’s all about soft hands. A butcher uses knifes all day and scars leave marks which aren’t smooth. If one burns their hands using an oven, the new skin is often softer than normal skin, and a farmer just has to get up early so it’s not really much loss for me. Bref, we went into the main part of town where I was shown an cinema, which was very small. I also was told that this is the place that Cédric would meet his former girlfriend(s), and spend the time. I thought it charming, considering the circumstances.

The town was glistening with lights, a day before the big ‘eve, and we got cold so we went into this little museum of a famous Provençal writer, who’s name eludes me at this present time. Note to self, look up name of the well known author from Aubagne. This is a place, that Cédric assured me, where his mother took him every weekend to spend time and to look at the little figurine area in the middle which depicts the town as it was and how it’s evolved. We got cold again, and while I was playing with childrens toys (photo attached), and trying to be the size of the miniscule sapin de Noël. We went back to the car talking about things that I dare not recount to the rest of the world.

We came back into the house, the family greeted me and tried to warm me up despite the fact that I wasn’t cold, and the final preparation meal before Christmas was upon us. I was warned by Martine of the gravity of the Christmas situation, and so she (maybe unknowingly) had been training me for about a week. It was a nice meal with Angès and her boyfriend Hubert, who was visiting that day because he worked on Christmas. Apparently he does some lifting, and he wouldn’t stop staring at me. Jean-François assured me that it was because he’s of a different social class and thus is curious and feels too awkward to talk to me. Turns out he has a super thick Provençal-Spanish accent which makes comprehension nearly impossible, but then again its the same with Angès, whom I can understand parfois.