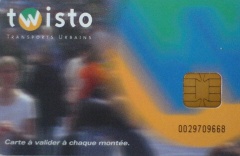 What do you think when you hear the word “Twisto?” Probably some dance, but not I! I think immediately of the bus and tram company that amalgamates 25 (apparently) areas of Caen. I doubt that there are even 25 suburbs, but I’m just saying, I’m not shitting on their ads! Since a few weeks I’ve had my Twisto Card which is a titre de transport which is quite handy for bus and tram rides and not having to worry about those damn annoying paper tickets!

This is what it looks like. You can update it and add more time at any of the machines for the tram, and when riding a bus or tram you just have to hover it near the validation machine and it beeps to let the driver(s) know that you’ve validated your pass. If you were to get caught on the tram without a valid transit title, I think it’s like €40 on the spot, or double if you don’t have the cash. I just can’t help but laugh at the people who try to make a huge scene about getting caught.

When I think of people getting caught I just think back to the amazingly stupid two girls that got caught this summer on the Viva. I was coming home from Toronto after visiting my friend from Ajax, and they got on the bus. They were about 15 or so, clearly drunk, and were wearing skanky outfits that pole dancers would be jealous of. They went on and on for about 30 minutes about it’s so unfair that they got caught, and that they won’t be able to furnish $150 for the ticket, and that they should of just offered to have sex with the officer to get out of it. Firstly, I think that offering sex to the transit enforcement crew in order to avoid a ticket is probably, 1) illegal, 2) immoral (obviously), and 3) basis for an additional ticket. I bet it all happens more often than one thinks, especially since the Viva buses are all based on an honour system. It works, just stupid teenagers and even stupider adults try to beat the system… Haha Dumbasses!

I’ve seen some people get caught on the trams here in Caen. It seems that the English students/people don’t realise that you need a ticket, and I’ve seen passports been thrown around and people getting all sweaty and nervous about it. I laugh inside, but remain frozen on the outside in order to fit in with the cold Norman people. I bet you one day the English people will band together to form a vigilantly group because they believe it’s racist of some sort of racial-profiling. It’s all rubbish obviously, but it would add some spice to this boring town. It’s easy to spot the English people though; they are always overdressed for everything, they don’t wear striped jumpers like the French, and they nearly always have hats or some sort of head-gear on in order to try to look more French, but in actual fact less French people wear hats and such. It’s quite paradoxical, I love it. I probably look foreign too, considering I don’t wear a coat (because 15˚C does not constitute cold in my books), and a bright blue pashmina and bring orange umbrella are too “flashy” for French society. No wonder France isn’t fabulous, they are too worried about being singled out!