After going through some photos on my computer, and seeing the referance on Myspace *cringe*, I have been reminded of my immersion trips to the lovely town in mid-northern Québec, called Saint-Donat! They were five-day skii-immersion trips made for students, where about a dozen of us got the opportunity to immerse ourselves in French. Now that I think about it, I realise that we learned a whole bunch more than I thought at the time. It’s certainly where I learned to say “c’est un beau mec,” but that’s because Brittney was trying to hit on Jean-François, the local hunk. 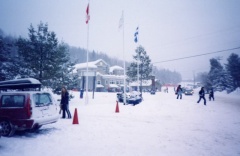 In any case, it’s a nice little town north-west from Montréal. It’s beyond and even more north-east than Saunt-Sauvé, another town I visited three years ago with my parents en route to New Brunswick for the first time. The towns up there are so rustic and lovely, and luckily for me in 2002, it was a huge place for skiing. It still is, and it was there that I first got my taste of what it’s like to be on skiis!

They hold lessons, and you start on the bunny hill, but within days I was off into another group, and I loved the experience so much that I went back a year later with a different group of people. Random things that come to my mind are, a horrible time sharing a room with my mortal enemy, Adam; buying a solid touque from the skii shop, going to a caban à sucre and singing “Alouette” with the actual québecois words; playing in the snow at night with other people; and most importantly learning that people from Sudbury are bilingual! At this point I didn’t know that there were francophone regions outside of Québec, but in northern Ontario, Manitoba, and Alberta, there are tiny little pockets of French-speaking communities.

I realies that this is going to be a huge adveristement (or not) for the lovely town of Saint-Donat, and Ski Mont-Garceau, which is nestled right in Les Laurentides (mountain range), but my refelction is necessary beyond words! In our little cabins which had entertainment rooms, a talent show, cultural activities, bingo night, a dance (how scandelous at that age), and nordic-track skiing. That was by far my favourite, and I’ve loved it ever since. 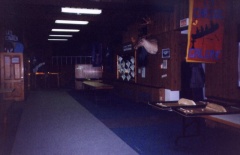 What other things do I remember? Having breakfast in the salle à manger, playing a board game in the lounge area, my councellors, Jean-Philippe, Jean-François, and Claude. The skiing was lovely, and I am even going to attach some ghetto photos from my old non digital camera *shock* but it’s just nice to reflect. I remember the girls from Loretto Abbey in Toronto were all a bitt, err, slutty, but the word “Loretto” makes me think of slut anyways, for some reason. I met this really nice guy named Adam who was heading back to London, on the bus. We hung out and everything, but we had talked a few days before we left. I remember being really upset that we never would see each other again, and that he had to study for a calculus exam on the bus.

One day, in a random act of randomness I will cross him, recognise him, and he will think that I’m a freak for remembering. It’s all up here *points to brain*, and it’s all good memories. Including our little fiasco’s of joking that Mlle. Ryalen was sneaking off with Jean-Philippe, and that Mme. Dee was getting drunk off the wine all the time, and thus unable to participate in our activities. It’s all rubbish, clearly, but it made our time more enjoyable.

Now that I think about it too even, I remember being lifted up at least two metres high by random people from London and Sudbury, and being thrown through an empty car tire, as one of our “orientation activities.” Oh good times! On day I will wander back there, and try it all out again, but probably by myself.. How depressing!