So this weekend was Homecoming, and for all those who are European, Asian, African, South American, or Oceanic, that means that american “football” team plays at home and it’s a lot of spirit stuff. In other words, with the history that our football team has had, it means they loose and everyone gets drunk anyways. The upshot of all this is, that last year whilst I was in France the team actually won a few games, one of which was against St Francis Xavier University X-Men, and guess who the Mounties were playing this year for homecoming? (/rethorical question) 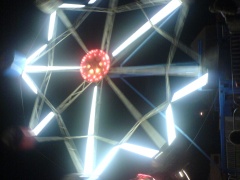 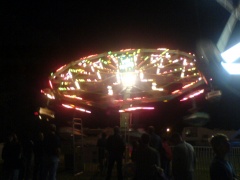 The long story short is that this weekend was crazy and with Homecoming, the Fall Fair, Fundraisers up the ying-yang, and Klezatory of the Performing Arts Series; I haven’t had time to do anything. On Friday night I headed down to the fall fair here in Sackville, and got harrassed by teenagers (damnit) and carnival folk in which people call “carnies” with admiration. The rides were sketchy, so I spent my money on fries and coton candy which was totally worth it. Met up there with Molly and Co., which was nice to see them all, even though they live a block away. So I walked home and did some reading and such since I had poop-loads.

Saturday came, and I knew that it would be a gong show, because of the football. Everyone was actually taking Homecoming really seriously this year because it’s the 10th Anniversary of them winning the title, so there were tons of alumni around and floating. Not to mention there were people face painted, and half naked, and with tons of loud cheering that made the game the best I’ve been to. Now, myself not understand the premise of football, nor how it works, and whilst sitting with a Canadian who had no idea what was going on, a Bahamian girl named Ayla who thought the sport was ridiculus, and a Bermudan girl who was on her mobile getting the rules explained to her so we would know what was going on. All in all, we don’t understand but the upshot (again with this saying) is that we won!!

I vowed to not graduate university before I saw the Mounties win a football game, and by golly it’s a sign. I’m graduating this year, they won homecoming, and I watched it from minute 0 to god only knows how long it lasted. I cheered them on, and heckled the other team a bit, and we were all on our feet for the final minute (which actually took like 5) cheering them on. Positive moments on the field after, were a result of me walking with the other international students around and talking with the players. A few of them actaully awknowldged my existance, and I congratulated them half-heartedly and got the impression that I was going to be harrassed sexually at the Pub later in the evening. Then I went to mean hall (wtf) and then home to get ready for the Hunton BBQ.

Barbecue was fun to be at, and I chuged down my bottle of wine before going over to 40 Union to see the, dump, compared to our house. And then I ran home, got changed (quite literally) and then ran back in order to go to the Pub. The lineup was huge, and there were lots of people that knew me (who knew I was so popular YEAH!). I talked with a guy from New Zealand who continusly claimed to have met me before (never happend) but I went along with it. I got the impression that I was being stalked, and once inside the pub, not only did I see 17 and 18 year olds galore, but my stalker… Octapus guy. It freaked me out so I froliked around before getting bodychecked and elbowed about a million times. Needless to say with my injuries I looked like I was just in a wrestling match with someone 50kg heavier.

I came home at about three, and struggled around into bed, bitter and tired from the days events. A homecoming celebration to be happy about; and I didn’t have to walk far to get home thankfully. The girls went to Aulac to get some food, but I was too tired since about ten at night, since I’m an old fogie now.

The fair is winding down, the Mounties are on a won game win-streak, and my male PMS week is rounding out. I can feel the hormones already becoming more naturalised and equally distributed. Things to look out for: don’t find yourself in my warpath, as I’ll take you down and you’ll be sorry that you even tried.

On a happier note, we lost at the footie match today about 10-0, and I had a few shots on net. I got bodyslamed by the 100kg goalkeeper, Belinda tripped me, body checked me, and sent me flying into one of those athletic flying rolls (who knew eh!), and then the British guy said “Sorry mate” to me after kicking me in the thigh. I was bitter, but it made me laugh all the same. I put so much damned effort into hustling and trying to get exercise and help the team, but we are frankly awful and nothing can help us.

1 2 3 Gracious in defeat; a bit condescending attitude proposed by Mark, but what’s to be expected from him when everything he says is condescending and rude; specifically to me. I guess since I’m not in PolySci I can’t ever be as intelligent as him, but at least I’m not socially awkward.