I’m a lazy bitch, I know, don’t hate me because well I’m nearly a month behind in writing about South Carolina. I’ll try to condense it as best as I can; but as you all know I ramble (like hell)! So anyways, departing from Toronto to Detroit was awesome and the Detroit airport was so kick-ass you wouldn’t know it. Detroit in my eyes is like major ghetto, but it turned out to be the most modern airport I’ve ever been to! It’s 100% Northwest Airlines flights which is cool, but it’s huge and well fun. It has this cool place in between the terminals where you walk through a tunnel and it changes colours! Check out the video!

It made my day just to fiddle around all down there for my connections. With the Michagin-ians (sp?) and the southerners I was happily having fun listening to people and pretending to be talking on my mobile, don’t judge me. So I finally arrived in South Carolina, Columbia to be exact and was greated by Jeannette my longtime friend from GT, she’s so sweet and cute, and actually quite short.

We went back to her complex-family’s house and she hosted a pot luck that evening, less of the pot luck, more of the Jean and I cooking. Her friends are really friendly and nice and we got along great; talking and watching Eddie Izzard on some DVD (funny shit). Next day we were off to Charleston to do some sightseeing of the old capitol of the state. So what are some cool things about the south? Well there are deadly spiders, which I managed to take a photo of (creepy!), and there are lots of palmetto trees. No not palm trees, palmettos are just smaller ones.. Who knew? 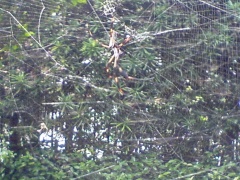 We met up with one of Jeannette’s ex-boyfriend / father to her daughter / convict / runaway / child to the people she’s living with friend (drama, I know!). He was totally into her and Stacey (who I finally got to meet; damn she’s hawt as f*ck) and I joked about it all day. How else are we to pass time when older people are flirting so obviously, Marty, the guy, didn’t pay much attention to me because he’s too wrapped up in his own ego. Anyways, we had smoothies and I got carded (yay), and then we went to a ghost tour at an abandoned jail.

It was tame as tame could be, but I had to go to the bathroom and I had to end up using a leaf and finding a place, I know it’s gross. But it was so humid and hot that it was disgusting, we also go lost walking, and the cockroaches were like chasing us? It’s a sign, I know it. We finally got back to Columbia at wee hours of the night, and then to sleep we went. After all, I was dragging Jean to the gym the next day!

So we went to Gold’s Gym, apparently it’s famous in the USA?, and met all of the co-workers that she talked to. I immediately took a liking to Jason who is this new guy who is major-hick-ditzy-hunky type. He got some instructions to do something and with a blank look and a “huh” he just stood there, I laughed and eventually after careful explination in simple language he did what he was supposed to. What more can I ask for, it’s just adorable, I want one!

The gym was huge and had a cardio studio which shows movies in a dark room, so despite my desire to show off my hawt body, I was relegated to the dark room until I did stretching in public. I saw at least three old people ghasp at my flexibility, one girl looked like she was getting wet (euww), and I could have sworn that a guy popped a woody when walking by. I guess that’s what happens when I’m standing on my head with my legs spread wide, the imagination just flows. Bwhaha. 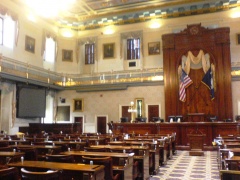 On happier note we planned our trip to downtown and the state capitol was well, boring. It wasn’t boring in a bad way, just state capitol way. Jean’s friend Eileen came along, and well the company of a short little Asian was great. The art gallery didn’t amuse me, but the state house did. It was awesome as we got to see the chambers and everything, go awesomeness! That’s the cool thing about Americans, they take their shizzle seriously, or something. The park was nice and I fed my Tamagotchi (yes they still exist) as we roasted in the sun, and then we headed back home. But I couldn’t get over the state house, the bathrooms were marble and actually clean! I did however get asked if I had grenades upon entering, I hate this whole right to bear arms shit. 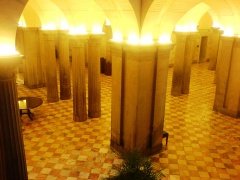 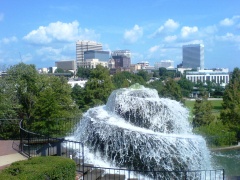 Here you can see the entire capitol, small yeah no kidding. So we went home and did lazy things before going to the gym everyday until we went to Myrtle Beach (no shit man!). I got fit and made other people uncomfortable, it’s a gift I swear. We met up with Sherri the awesomely bubbly (so much like me) southerner friend of Jean who teaches the aerobics classes. She makes me so happy with her awesomeness and positive attitude, it’s just sad that she has major issues. 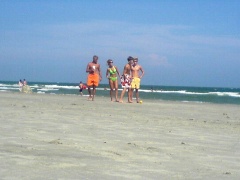 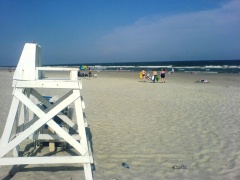 With fears of getting lost like she always does, April, Jean and I set out for Myrtle Beach cause well I wanted some beach lovin’. We got there and it was beautiful, our condo was so cute, and comfortable, and the beach was just a dream come true. I layed there and did nothing whilst Jean bitched about the sun giving her a rash. I guess I was the only greatful one. We all got into an “intellectual” debate about the ages of these two guys who were playing botchi ball with their families. They were the cutest family ever and I can only hope to have bodies like they all did. As a startling fact, most people there had gross bodies and weren’t worth looking at, thankfully I had a bandana to hide it from my eyes, woudln’t want my eyes bleeding now would we? ;D PS: Don’t hate me because I took a photo of the family, love me because they are hawt!

We went to the beach late at night and froliked. I lost the ring I bought in Charleston, but I found it in the sand (no way!) and I went for a walk and could feel a storm coming in. The ocean was so warm, but I was afraid a shark would eat me while my ankles were in the water. I’m a freak I know, but it’s okay. Apparently the po-lice (haha americans) let young people drink on the beach at night; wtf? We went to a Bi-Low which is always open, and I bought a shirt that would fit a 5 year old girl, I claimed that it would make a great supertight booty shirt (it will). I just need to remove the neck part and then it will fit over my head and I will be able to show off my hawt body. Go me. By the way, the stuff on the beach was really whory, so don’t judge me I was high on sugar, or something?

I forgot that we went to Camden, this historic war site, and it wasn’t anything exciting just old stuff so I don’t feel the need to write about it any more than I have to. Done! So the next day was a tax free day and I was off to the airport thanks to Jean, even though it was a 40 minute drive, wtf? From one side of the city to the other in 40 minutes and it’s not even that big of a city? Messed up I tell you. It was empty and nothing was going on, so it was a relaxing way home. The flight was delayed at one point, but I’ll leave you with some awesome airport photos, since I know Henrik loves them. (De är allt för dig min vän 🙂 ) 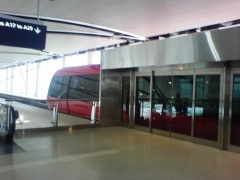 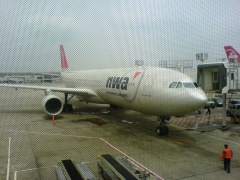 The Detroit airport even has a monorail thing cause it’s so big, isn’t that awesome? See what I mean about NWA being everywhere, it’s like they are taking over the world. Creeeepy. I will try to get photos of Pearson International in Toronto when I fly out to Moncton next week.

Question to the Swedes, should I go ahead and get a SAS Eurobonus membership if I’m going to be using Star Alliance flights all the time, and moving to Sweden? Yes, no? Let me know, lova ya’!