Interesting fact for anyone who didn’t know or notice during the last few weeks of my absence… I was travelling with my dear mother who crossed the ocean for the first time in a very very long time to come spread the family on the world. The basic reason for her to coming was to spread my father’s ashes in the place where she and him were married in Switzerland; so I was basically a detour. I decided that I would go with her, because she would have struggled alone, and because I’m a good son and does translation and helps her along. We stayed in Strasbourg for 3 nights in Gallia, ate a lot and then set off Monday morning to Paris. Ended up taking TGV speed train which was nice and not four hours just to go to Paris. At the time of going I was skepikal of Paris as every other time I went I wasn’t a big fan. 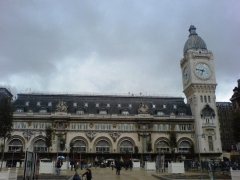 After our not so long train ride to Paris, mother and I decided to locate our hotel by navigating through the many metro stops and areas. Finding a map was also imperative, and thanks to her infinate wisdom we were able to get one at a gas-point, which I never would have thought of. Naïve little me thinking that we would have to go to a book store…

So after finding a map we sort of navigated around the area after getting drenched by a rain storm that decided to come down on us; so we were soaking wet and were looking for somewhere to refuge ourself. In our infinate wisdoms again we went to the train station and we booked our trains for Geneva, so that we would have reservations and everything; thank goodness. They even managed to give me a discount for my Carte 12-25 when it wouldn’t let me do it online, how very kind of the girl. I think it was more of the fact that it was her first time doing something for a train abroad.

So we began our sight seeing travels going to see all the crazy things that make Paris so freaking famous. I really wasn’t that impressed with Paris, as I didn’t have much expectations for it. But regardless it was a lot nicer than I thought. Not as much garbage around or dog poo as I expected; as I had heard many things from people about the large quantities of dog-crap. Needless to say watching the ground was a good way to avoid taking the wrong step onto something. 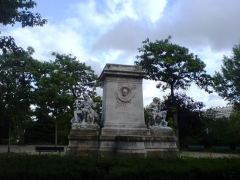 I truely don’t remember all the names of the monuments and buildings that I visited so I will just post pictures and hope that it pleases people on some minute superficial level. The above is the Bastille which was the celebration of the Revolution on July 14th, some year I can’t remember. The one next to it is the Arab Institute of History or something, since apparently the Arabs have influenced very much France and Paris (not surprising). 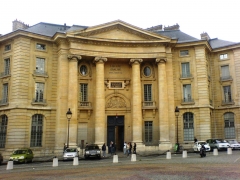 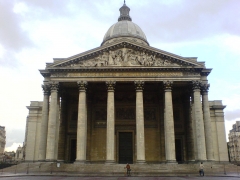 After walking around in the rain for quite some time, we arrived in the Latin Quarter where for many years in the recent past the langauge of communication and education was Latin; since then the language has become more dead but the buildings of the Sorbonne remain, one of the most famous universities of the world. The university campus is frankly huge and there are many different scets of the campus. Right around the corner here in the 4e arrondisment we found a nice square where there were buildings all tapered off and thus large buildings were the foci of the pictures. 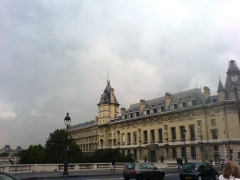 One of the most famous monuments in the world, and specifically in Paris along the Sienne, is Cathédrale Notre Dame. Qutie frankly after seeing it, and it being ridiculusly opressive in size, I took a moment to reflect on the one in Strasbourg which I pass by everyday. This famous one in the nations capitol ain’t got nothing on the one in Strasbourg. The detail is minimal, the clocks and paintings and stained glass is feeble in compairison, and now I realise why there are so many people that come to Strasbourg as tourists. Of all the churches in the world that I’ve seen, the one in Strasbourg kicks every other one’s butt, and by a lot. The detail, the precision, the beauty, the impressive stature having lived through the two world wars and 400 years; way more impressive. 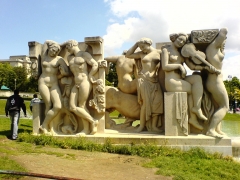 The Effiel Tower is huge, this is true, but what’s even huger is the sheer population of tourists who flock around the darned structure. All four of the legs were open for going up and the line-ups were estimated at about 4 hours per person, for walking, elevators, and everything; at ridiculus prices as the ones advertised it’s absolutely insane to have even considered going up. It just sounds stupid anyways, and we were perfectly content with not going up. Slight time lapse in the story though, as the morning of going to the Tour Effiel we went to the Palais de Versailles, in Versailles just 40km south-west of the limits of Paris. Luckily the RER trains were frequent and fairly cheap, but when we get there we were overwhelmed with the mass amounts of tourists that come to this place; Spainards, Italians, Japanese, French, Swiss, Norwegian, just about every nationality was represented there, even Portugese! 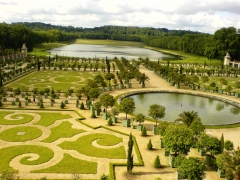 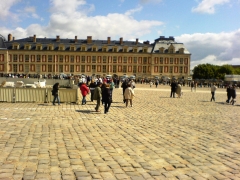 With gates lined with golden designs and a courtyard that could probably house four or five football fields, the property of the massive palace just seemed to go on forever. The garden of Marie Antoinette went on farther than one’s own eyes could see and thus pictures of it was impossible. It just goes on forever, and would make sense because it was where court was held in the times of the great sun king. They would walk around, and go in and out of the tree mazes into the little encloves in each of them, and the rivers and larg
e ponds with fountains; it was just magnificent to see, and even more difficult to walk in the oppressively cold weather. 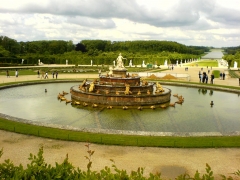 The ponds are massive, with fountains that are usually fish that shoot out water for metres, and the only thing that makes it less authentic is the toilet signs, the little garden cars that are going around, and the mass amount of annoying tourists clutching cameras and maps of the gardens. As you can see in the photos the property expands out into beyond where the camera lens can reach; it’s just unbelievable in size, it makes me want to cry. It reminds me a lot of Canada though, you could walk for kilometres and never see a single new thing!

With Godly statues placed all around the property, it becomes painfully obvious that you’re on royal soil. The massive marble blocks, and sometimes even limestone are placed along every open space, and along every walking path. I suppose that the King and Queen got bored and needed things to look at when they walked by with the hundreds of hours of doing shit-all. They have amazing detail but unfortunately are sometimes copied or are similar, which makes them quite inunique, and thus slightly boring. They should have hired new artists, it would have helped the economy; or at least I think. How the heck did the economy back then even work? I have absolutely no idea! 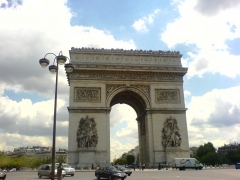 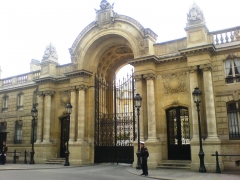 For one of the afternoons we were given a little grace; the sun was glorious and even opressive at times. What a wonderful time to search for a bank to cash some travelers cheques. Little did we know that 90% of the “banks” that we found were only little brances for consulting and no actual desk with people to help you, so we managed to just struggle along until we got to Switzerland. We finally arrived at the Arc de Tripomph, and well we looked for the undergound passage and found the loo becasue we both had to go. They were free, and relitavely clean for Paris, I was impressed! 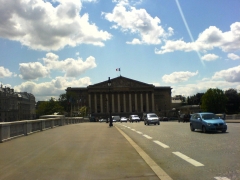 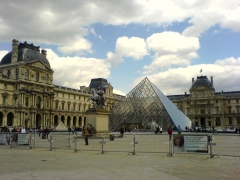 Rounding up the Paris experience was the one thing that I was determined to see despite the fact that it was completely out of the way. I had to see the Assemblée Nationale since I had listened to M. Miesse talk about French politics for just about a whole year. He would go on and on about all of the constitutions that France had, and I never had any idea where he was going with the stuff; but I was determined to see in reality that which he spoke of.