After the long conversation that lasted until about 04.00 in the morning, we went to sleep and awoke to the birds chirping, the bees bumbling, and the sun shining oh so very brilliantly. This was quickly welcomed with computers turning on, showers running, and chatting and mail checking to our fullest. It’s amazing what you can do when you get a couple of computer nerds and/or people that know how to use computers and/or the internet to it’s fullest, together!

After having decided that we would get out of bed for the day, we headed over into town to see the awesome pendelum thing that was up on the hill. The days have all sort of blurred into a short time now that I’ve been writing exams, but I will try to relive as much as I can remember vividly. We more or less walked around for the day and saw more buildings and ate ice creame, and milkshakes and learned about Czech history and archetecture! It was nice to see skateboarders, and to have pictures of great views and for the amazingness to all just be continued. After watching more CSI episodes we ditched the idea for “disco-nap” and started to get ready to go out for dinner and then disco again. It took me longer than expected, as usual, but after choosing the right outfits and helping each other out with fashion advice (the blind leading the blind) we made it to the door and stopped by this quaint little bar-reteraunt that I spotted the previous night with our feeble attempt at KFC. The photo on the above right is the “astronomical clock” which pails in comparison to the one Strasbourg. Pick pocket heaven again! haha

This resteraunt was nice and quaint and I ordered a nice meat plate with dumplings and some rice. It turned out to be much more than I thought but it was still really good, and with good conversation and company it made the meal much better. Thankfully for my slow eating skills this passed a lot of time before we would head out to enjoy the night life. We aren’t going to lie, but we were quite tired (both yawning :zz: ) but I wasn’t going to keel over for a chance again at Valentinos.

I was greeted with the nice surprise to know that Matthew’s friend, Tomá who was a laywer. He would join us later at the club, so we headed over to Praha 2 again went straight to our place to get some drinks. It was a lot more lievly than the previous night when we arrived, so we got some coke and such and started judging everyone around us to pass the time in good company and music. Music, faboulus to say the least again, as Matthew has made me a huge fan of house, funk, and dance music. The cartoons were playing again on the big screen so I watched that and then decided that it would be a good time for a real drink. At a price of 65:- who could possibly go wrong with a vodka-coke? When I bought it I almost thought that it was spiked with someone extra, but it turned out after my 2nd or 3rd one that there are double shots in each one. No wonder I could actually taste the vodka for the first time like ever!

Apparently drinking it through a straw makes you drunker, so “subconsciously” I grabbed a straw, it was mostly just nice to suck on something, no pun intended 🙄 . Tomá arrived and I met him, and he was really pleasant and had a good sense of humour which was nice, and I went on to my third or fourth drink, I really don’t remember. The point is I was really starting to feel it, and yet I wasn’t dizzy or anything. This would probably be becasue I had eaten a big meal, and it absorbed the alcohool better than the last time where I got very sick. Good going on my part.

And so the dancing begins, and so the fun begins also. In a huge crowd of people you get lost really easily and nobody pays attention to people; but the ones that are half-naked on the stage feeling themself up infront of a mirror tend to get some attention, and also the ones that are jumping around all strung out also. Go team them, or something! :crazy: The music was good so I couldn’t help but admire how amazing Matthew knew all the music and what a great dancer he is. The littlest moves are yet the most awesome, including this really trippy hand move that made me dizzy and I wans’t able to master yet (saving it for next time we meet) but it was cool. We fended off some creepy people that were trying to get at Matthew, because of his so obvious hawtness and sexyness :wave: and Tomá helped with that too.

Between the three of us, we were making a pretty good team, including spotting out Dreamboat who wasn’t admiring himself in the mirror tonight, but was bussing drinks again. He came to pick up my empty glass, and yet was staring at the floor; however he still came over as I said he would! I went to the bathroom at some point and felt a little dizzy, managed to get in and out without being raped, and then back again to the bar where I awkwardly avoided getting visually molested with the dancers on the bar. Seriously now; it’s just creepy that some people outwardly stare at them!

Back to the dance floor where people contiously gave Matthew looks, I don’t blame them 😳 but it all sort of progressed from simple innocent dancing to hardcore let’s get it on groove-funking! Sandwhiches, front-on, back-on, you name it, we saw it or did it, with grinding like nobody has ever seen. I wouldn’t be surprised if people got off on seeing that, well cause you know how hot it is when I shake my hips, eh?! :lalala: Anyways it continues like this for awhile and Tomá gets more and more drunk, drunker than I thought he was, but it was probably because of my own drunkness, but sweaty dancing leads to filthy grinding and lots of full on body moving and shaking etc etc. All in all after a few hours we got tired and decided to head out.

Dreamboat apparently checked Matthew out upon leaving, which I teasingly deny; but how the hell would I have known? I was struggling to get up the stairs alright, and we said goodbye to Tomá, which was great having him there as he was really nice and good to meet him, and we headed down the hilly way back to the loft. I really would like to see Tomá again as he was fun to have around and his company was very positive! Prague again Prague again! Anyways, we arrived home and of course I was restless and all energized from dancing. The virility of youth, I suppose; and we wrestled a bit with my frivelous weakling attempts, and eventually I gave up. Tiredness, sleepyness, alcoholness, enough said. :no: We headed to bed and didn’t wake up until a reasonable hour in the early afternoon! 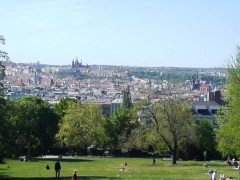 Since we are young, energetic individuals we saw that we needed to do something or go somewhere to not waste the nice weather. So we went to this huge hill in Praha 2 where there were tons of people laying around in the sun. We were there probably an hour looking at the nice view, and the cute Swedish families that were around. Some guy was video-taping something which looked to be hand-porn, so we joked about that for awhile and discussed the importance of dogs in Czech culture. They are everywhere, and so is rubbish on the ground, regardless the view was great and laying in the sun was nice. I hope I didn’t get too sunburnt either! 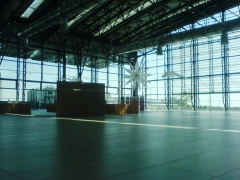 We totally went for Czech Sausages also that night which was a great binge for me, having been on a diet last few weeks and then more CSI and an early bed time because he had to be up for work the next day and I had my flight in the morning. All in all a nice connecting trip with a reasonable time for flying.

I made it to the airport with public transit again, and it was really simple with the Metro and bus, and such and did the ticket thing in the really nice airport terminal. I followed some Finnish students around and talked Swedish with them, they weren’t very nice obviously and then got on my very small flight back to Stuttgart. There were again probably 10 people there, and the landing was pretty rough, so rough that some glass broke in the overhead compartment for a very German tourist who was a university student. I’ve never heard so much German swearing before in my life; haha! I feel sorry for him though as they were nice vauses.

I rushed from the airport to Stuttgart with the S-Bahn only to find that my train was 2 hours delayed since some problem on the track in München, damned city! I waited, and then we moved tracks and I finally got on the train and nearly in Strasbourg when we had another delay cause of some crappy TER rail service going to Séléstat, slutty town. Finally we arrived in the station and I walked home a bit disorientated by the high amount of tourists in the city due to the holiday that I wasn’t aware of. I could have extended my vacation, but that wouldn’t have worked out for other people I think, but I didn’t want to leave Prague. I had such a good time and I enjoyed it immensely, probably too much because now I want to go live there! Waaa :'(

Back to reality, and exams!