When I arrived in Malmö in the afternoon, it was raining which frankly was no surprise at all considering that Scandinavia should be covered in snow, but is just being rained on. The Malmö train station proved to be just as much of a joke as the one in Göteborg, and had little to no information about anything. The only interesting things that could be found were the automatic machines to buy tickets to Copenhagen, which I checked out and tried to understand a little bit. It was quite cheap to get to Denmark, which I already knew but this was just confirmation. The city is basically a border town which has a bridge that you can cross in 20 minutes to get to Kastrup (the Danish airport).

So again I was without map, but I had previously been smart and got walking directions before I came. This proved to most helpful, but the problem is finding the names of the streets because they weren’t clearly labelled. The tourist information office was once again a map on the wall, which was useless, but with directions in hand I set off for my 5 km walk with my luggage to the outskirts of Malmö where my hostel was. After 3.5km of walking down the same street that changed names about 20 times, I found the turn and there was even a little sign directing me to the hostel. Unfortunately for me, in the rain, and all bitterly cold, the sign was pointing in the wrong direction and so I walked for farther than I needed to. Once I realized that I was walking away from habitatino, I turned back and cursed the sign. I continued my pre-organized directions and I found the place, which was just about to close. Thankfully I got my key and got settled in my empty room. The entire hostel was empty as most people don’t stay in Malmö it seems, but I made myself at home and took a little nap since it was all wet and gloomy. The front office closes at 20.00 so they just lock up the doors and there is no staff on hand, one would think that this could be dangerous but it proved quiet and nice. I went down to the TV / shower rooms to check them out and was appuled to see the co-ed, communal showers. I absolutely refused to go anywhere near them so I went for 2 days without showering, but the rain was good enough to clean me.

The TV room was nice, but they only got SVT1 and SVT2, and a bunch of Danish channels, so things were limited to documentaries and cheesy SVT programming. After about an hour of reading Aftonbladet a strange looking guy came down and asked “Hello there, do you speak English?” I debated whether or not I would answer, since at first he was creepy, but I said yes and let him explain what he wanted. He arrived late and was let in by someone leaving people, and couldn’t find the reception, and therefore couldn’t find a room. He turned out to be Canadian (as I could recognize his accent) who was on his way through Scandinavia to take the Trans-Siberian Railway to China. I thought he was crazy, but his expeirence in traveling was very good and he had it all planned out. He just was arriving late because the trains in Germany were on strike or something, and his friends there wanted him to stay. So he camped out in the TV room for the night, and he spoke to me a lot about China and how things were there, since he’d been before. He seemed excited about taking the railyways in Russia, but I was quite clearly and vocally against ever doing that, until Russia becomes less sketchy. 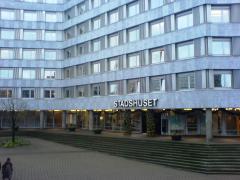 I went to bed, to my room myself and then woke up later and went to walk around Malmö, which really isn’t exciting at all. To say that there is nothing to see in Malmö is completely honest and true, as it’s boring so amious walking around proved to be the most interesting, and checking shopping out at the malls was also fun. As you can see, city hall and a random church are both excellent things to look at while walking downtown. The rain dampened my mood but helped pass the time by going into buildings to see what was going on. It’s really just a suburb of Copenhagen, where they speak Swedish like Danes, and are barely comprehendable. So I struggled through, and eventually all was swell.

I arrived back to my room after dinner, and was in the process of dancing to the amazing radio station that was on my phone, when someone came into my room. I was startled to say the least, but it turned out to be a German guy from Freiburg (just 30 mins from Strasbourg) who was moving to Lund for university. He was very polite and kind, but his English wasn’t very good for conversation. He had a lot of stuff with him, and we would be departing the next day. We decided that I would walk, and he would take the bus and we would see who arrives first. The following day I got to the trainstation just as he was getting in, so between me walking quickly, and him waiting for the bus, it was equal time, despite the fact he was dry and I was soaking wet. I arranged my ticket to Copenhagen and waited as they leave every 20 minutes.

Before going to Denmark I needed food so I went to the supermarket. I was walking around when I heard music, and I thought at first that I was going crazy because it sounded like someone was talking too. I looked up and it turned out to be as you see above, monkeys or whatever singing and moving that were mechanic. I couldn’t help but laugh and take pictures, and as I went to each section there were different ones too, like cows mooing and singing in the dairy area, etc. The crazy people of Skåne!

It was sad to loose reception of my new favourite radio station, RixFM, which plays hit music all the time, including Linda Bengtzing and Markoolio’s new song, which is frickin amazing. Anyways, I got to Copenhagen and even after walking out of the train platform I could sense the differences between Sweden. Danish laws are like French laws, loose and unfollowed, so smoking is allowed everywhere, public spaces aren’t clean, and people are rude. That’s what I found, and the train station was disgusting. I also hate Danish Crowns, but that’s besides the point, just too many coins. So I called up Niels, whom I met on CouchSurfing and would be hosting me for the planned two nights, and he gave me direction on how to get to his flat. The trams, metro, and S-Bahn were all very pretty and new, and it took little time to find Niels and his flat, which was very small. It worked out fine since he had to go to the airpot to pick up his sister, so I explored Copenhagen in the rain.

In terms of what Copenhagen was like, it’s very small city but the buildings are huge! The streets are massive like highways, and there are more regions for bikes than for walking. Bikes are everywhere, so I can’t imagine what the Netherlands is like, but still I was just blown away at how nice the buildings were. As long as you look up and not down it’s a pretty city, but I can honestly say that I will never
go back, as I didn’t like it very much. The Danes are just too weird for me!

To say that it’s rainy and windy in the city is an understatement, I’ve never been blown over or so wet in my life, and umbrells are useless clearly, so the weather was miserable. I got lost, but had a map that was wet so I just wandered around until the rain stopped and bolted for Niel’s house again, and I got lost again even, but all was good. It killed time. I got back to Niels quite late and we talked about philosophy for awhile. Danes are nice, sometimes, but very loud. I felt like he was yelling at me the whole time in friendly tone, but he was a great host to a random person and even showed me how to cool omlettes since I never had done it before. However, despite al of this I hated Denmark and I wanted to leave ASAP so I called up Johan and told him I would come to Växjö a day earlier than expected and he was fine with it, so I booked my train ticket and then was off.