Finland you say? Land of lakes and forests? That’s the understatement of the century…

So on the morning of December 30th, Robb and I woked up at 06.00 and left for Haparanda by car, which is on the border of Finland. We weren’t sure where we were going because the bus stop was an abandoned old train station that isn’t in use anymore, and the details were sketchy about the bus that I had to take to the closest train station in Finland. We got there and waited about an hour, and then the bus finally came. I had to say goodbye, which was difficult and very sad, going on the rest of my journey alone, especially to Finland. Oh well, yay for mobilephones!

So I get on the bus and I tell the bus driver “enkel till Kemi” and he stares at me with a blank look on his face. And then I say “Kemi” and he says something to me in Finnish, and I clearly understand. Then figuring out whether he wanted the money in Euros or Swedish Crowns was a struggle. Numbers in Finnish is messed up, and the fact that he spoke no Swedish or English didn’t help. I was the only one on the bus for the whole ride which was scary, but whatever. It’s the wierd thing about driving through Finland, there wasn’t much to see, and I was all alone reading a book which I nearly had finished. We got to Kemi, and I walked around for awhile looking for the train station; it turns out it’s right behind the bus terminal but I didn’t realize this. I had previously made my reservations for the train, but I had to pick up the tickets. Being the ditzy person that I am, I forgot that it was Sunday and that nothing would be open, so I had no way to get my tickets.

There were a few people in the termial building (small room) and I went to the machine to pick up my tickets but it wouldn’t take my number, or my credit card (surprise surprise) so I had no ticket, and only a pass for the train, so I hoped for the best. I got on the train with all the Finns and then found a seat, even though there were many cause the train was coming from Rovaneimi, one of the randomest places ever, heading for Oulu. The conductor came around and I showed him my pass, and tried to explain to him in 3 differnet languages that I didn’t have a ticket but I had a pass, he didn’t want any of it, and was rude and threw it back into myface and went on. How rude eh? Oh well, he probably understood what I said in Swedish but just didn’t want to aknowledge it because of rivalry. So I just slept and tried to keep the old man across from me from staring, by hiding under a blanket.

We arrived in Oulu, where I was to change trains and meet a friend who I would be staying with in Helsinki. Frankly, he was a friend of a friend, and I was sorta nervous about it, since it was New Years and all, but a free place to stay is nice. So he was at the station, and he came and told me that had about 8 boxes to load from the train because he was moving to Helsinki. I said I could help, but communication was difficult. Little did I know, but he is Russian, and speaks Russian, Finnish, and broken Swedish, and hardly any English. Communication was, how shall I say, a major struggle so I resigned myself to the fact that I would smile and nod for a few days, and sucked it up. The train ride was weird, because I was in the wrong seat. It was long too with nothing to see or do, but sleep. I tried to fall asleep but I kept getting woken by babies runnind, then somewhere halfway there I got my seat taken by someone, who wouldn’t get off until Tampere, a few hours from where we were. It turns out that he didn’t want to give up his seat becasue there were no other seats on the train at all. People were laying everywhere, in-between cars,on the floor, in the asiles.

Why would a company that has a monopoly of the train services sell more tickets then they have seats? It just doesn’t make sense, so I found a window and parked myself standing there reading my book for a few hours, how boring, tyring, and irritating to always have to move for people that were searching the non-existant bathrooms. Eight hours later we arrived in Helsinki where it was horrible rain weather, and I had to help him take about 100kg of things to a cab… I was irritated, tired, and just miserable at this point. This is the site of where the train arrived, some random train stop closer to where he lives. So we took the cab to his flat.

It turned out that he was moving into his flat just that day so he had nothing there, and I had to carry everything. I was becoming very annoyed, but I just pretended to be happy. He cook Russian food (disgusting) and I slept the earliest I’ve slept since I was about 9. The next day he decided to walk around Helsinki showing me around, which was nice, even though I didn’t understand anything he said to me. I will post all the buildings, but since I don’t know what half the stuff is I really don’t know what to write about it!

w Years Eve, everything was closed and they were closing all the roads and such for the celebrations that would come. The harbour was very nice, along with some curches, and many Russian tourists all over the place. Despite being the capitol city, it’s more of a large sized town and not city, very quiet and small which is quaint, but just weird being a capitol. Notice in the pictures that everything is just rain, rain, rain, rain. It rained a total of everyday that I was in Helsinki, and it never ceased. It’s actually quite sad, but apart from that, it’s a very pleasant place to be. I would have liked to go back in the summer when it’s probably warmer and more sunshine, but alas time is limited.

This buidling is actually quite important. Throuhout history Sweden-Finland relations have changed, and having wars and such, but this building is quite special because it’s a replica of the royal palace in Stockholm, and now acts as the official embassy. It’s quite a bit smaller, but it looks exactly like what I will see while in Stockholm soon, and notice the traditional candles in the windows; jättesvensk! 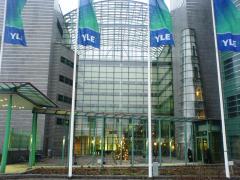 This building is super special and super sexy in my opinion. I don’t know why I’m so fascinated with them, but I love TV buildings. YLE is Finland’s national broadcasting company, and before leaving I said to myself that I had to go and visit it, and take pictures, being a tourist and all. So I was with all my luggage riding the public transit around Helsinki looking for it, and I was impressed as it’s a very nice building. Maybe Tobias works there? If so then whoohoo he gets to go into a really nice looking building everyday, lucky bastard!

What is the importance of this building? How could anyone ask such a question!? This is Hartwell Arena and will be the host for Eurovision Song Contest 2007 in Helsinki. *drools* To me at this exact moment, this place is godlike in ways that can not be described in words. It’s just so sexy, but at the same time it’s really bland looking and nothing interesting is going on with it; and it’s in a really odd place that’s in the middle of an industrial part of Helsinki. Despite all this, go team ESC!

All of this was in the rain, by the way, so I was soaking wet and made my way back downtown since I had to get to the harbour to get on my cruise ship bound for Stockholm. Stockholm, yes that’s in Sweden you silly geese. I got there a few hours ahead of time scheduled (which was smart) and got through the lines and such then boarded the boat. I payed about 50€ in total for the ticket and cabin which is quite cheap. The place was just fantaboulus and beautiful, but there were tons of drunk Finns, Swedes, and Russians. I parked myself in my little cabin and took a much needed shower and went to get some things to eat before we set sail. I didn’t think that I would have any problems on the boat, but between the extreme fear of boats that I have, and the food that I ate, I felt extrodinarily sick for the duration of the trip. I felt like I was going to blow chunky chunks about a million times, and finally fell asleep in my bunk bed in hopes that I wouldn’t explode on the sheets. Luckily I didn’t and all was swell after 16 hours in the boat.

It was intesnse, it has everything! Disco, bars, performances, even a programme, which really impressed me, despite being too ill to participate. It was all swell until I woke up in the morning to see the clock at 10.00. Frankly, I freaked out because we were supposed to get into Stockholm at 9.30, and I thought that I was late getting off the boat. I forgot totally about the 1 hour time difference, so all was swell and I took another shower and calmed down trying to find directions to where my hostel was in Stockholm. Go team ditzy me!