Baguette this morning with Ginette was good idea, we just need to find more competition and such. Also we sat around for some hours just talking and figuring out if we wanted to go to Kehl or not. We decided to go to ‘Place des Halles’ instead, which is the shopping mall (and quite small too). Amber was hungry as always, and we walked around looking for things to buy but everything was so expensive. Then Amber gets a phone call from Amimin (sp?) the taxi driver, and he says that he wants to meet her at the mall and doesn’t mind taking us around to show us the city. I was sketched out by this but everyone else seemed lazy and tired of walking (lazy asses) so I stayed with them during the day where it was some sort of a festival and thousands of people were around the streets. So he showed up and he was exactly as I imagined, a 25 year old Moroccan man, who was overweight and smokes excessively.

Against my better judgement, I decided to allow him to drive us to Kehl, and after going through the East side of town and showing us that he knows just about everyone, we arrived in Germany and walked around. Amber and him flirted a lot (for God only knows what reason) and he kept touching her inappropriately but she didn’t mind to care. We went into some shops, and Ginette coudln’t help but notice that German people weren’t as good looking as French people, how sad. After I explained to her that they are from a different ethnicity, everything seemed to make sense and we just giggled and made fun of Amber and the cabbie the whole day. The always hungry students found an Italian Ice Creame resteraunt where we were for like hours, and talking and joking about random stuff. The taxi driver seemed to ignore us, except when we talked about swear words, and he likes to say ‘J’arrive’ a lot, and it started to bug me.

Admist all of this excitement, Amber seemed to allow herself to get caught in a trap to go Aminem’s cousin’s wedding with him, and we laughed and joked about that. We found things that were so much cheaper in Germany, like sandals and health products; and made a mental note to come back here very soon on the bus. On our way back after leaving at about 18.00 the cabbie took us to a pack with a mini zoo and a bunch of African weddings, which was nice. We took some pictures and then got excited when we went to the ‘Conseil d’Europe’ and ‘Palais des Droits des Hommes’ which are all EU buildings. I took a bunch of pictures with Ginette and we found out they had an open house on Sunday, so we vowed to come back. 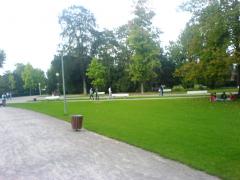 We got dropped back at the house, and wasted away the evening until Amber called and asked if we wanted to go out to a bar or something. Against my better judgement (again) I decided to go and rescue her from the creepy guy, and dressed up a bit to go to a really dingy little bar where people smell bad and the drinks are expensive. I had some pinapple drink while talking with them and the cabbie ignored all of us as his other friends seemed to be there. This German group infront of us kept staring at me, for some reason or another, and the French guy behind us was doing the same, I really wanted to scream when he hit me accidentally with his arm as he was putting his coat on, but I just shook my head and ignored it all. All in all, he ditched us and we left after paying for his drink and such, and then we walked Amber home because she was afraid to be raped or something (some guy followed her home the night before). All in all a weird day, and Ginette and I decided that we were done using the taxi driver to drive us around, since we thought he was creepy. Oh well, it would have all costed 300 in the end, so everybody wins; we got to go to Kehl afterall, and Amber has a creepy friend, and some of the taxi drivers sexual tension was released by his touching of her arm (creepy).