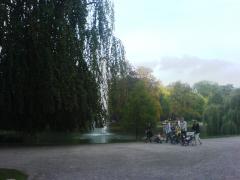 Maybe I’m silly or something, but apparently we get shafted in our residences seeing that we only get uncomfortable blankets, and no pillows. So for the last few days I have been sleeping with my dirty clothes as a ‘pillow’ until we went to the Maison d’Édtuidante to obtain the stuff left to me by Meredith and Maria. I got a nice comforter, some pots and pans, some bowls, and a few cups; but most importantly a pillow. The graces of the pillow has brough happiness into my otherwise sad and uninteresting life during the evening. Magically as I received this pillow (which isn’t the same as the one at home; but IKEA can help with that) allowed me to sleep soundly for the first time! What a revelation, and what a grace for a higher being known to most as ‘God.’ I don’t think I’ve ever been so desperate for having a pillow in my life, apart from being an insomniac; so now I’m happy with a pillow and all is swell.

Thank goodness for the Cathédral, as it’s our meeting place and we only really know how to get there and such. Finding anywhere else or alternate routes seems to be a bit of a bitch to do, however after awhile we will be used to it. If only places to eat were easier to find, but with all the little side-streets and such that there are it’s a lot more difficult to find anything of vast need, for example: food. And so Ginette and I have decided to go down the ‘Quai des Pechêurs’ in order to find a boulengerie where we can be buying our baguettes on a regular basis. I assume that 0.80 is reasonable for a baguette, if not then somebody save me!

When Amber arrived into the Strasbourg airport, she apparently took a taxi right from there and had no problems, but this begs the question when she starts to talk about her travels. Apparently she met a taxi driver there that wanted to help her get a mobile phone for like 10 and then gave her his mobile number and expected her to call him and such. We were left with some sketchy details so I’m not quite shure of what was going on with all that, but he sounded like he had a sketchy name, and that he sounded Moroccan or something from what she was saying. Oh well I didn’t think anything of it, considering that Amber is quite an attrative girl and that she seems to attract the attention of everyone. For example today we were at the Monoprix for shopping and we were waiting outside for Ginette and Crystal when these two guys were walking by, and we were standing on a wall. She was just talking to me, and I notice that one of the guys (who is about 14 or so maybe older) was staring at her and was giving her the look down and wasn’t watching where he was going. I sort of laughed and didn’t think anything of it until he ran into the wall and made a huge “ouf” sound and then ran off laughing. Natrually I started to giggle and asked Amber if she realized that the guy was staring at her and that he just ran into the wall. Her response to it exactly was: “Ahha I didn’t notice, I’m sure you’re imagining things” and then did a little hair flick and giggle. I’m not even going to get into this one, but it’s got oblivious written all over it!

Also when we were walking outside the CROUS office around the corner and this guy behind us came up and told us that we should practice our French, and then we switched modes and talked to him for a little bit at the corner. It turned out that he was Luxembourgoise and he spoke very good French, but his name was Sven and got super excited when he heard that I was of Swedish decent. He however is fully from Luxembourg. Anyways, it was obvious that he came over to talk to Amber and I, for Amber, so I let it slide a bit and then went to the inet café to check my mail and to talk a bit with some friends.

Later that night we sat outside and talked and got in trouble by the security guard because he told us that people were trying to sleep; however nobody was left in the house as they were out partying so we were a bit confused. Lots of people kept walking by and staring at us for no reason, but I figured that French people just like to stare, as we weren’t really anything good to stare at I think. We went to bed afterwards, and I went starving but we planned to go get baguettes also so it was very exciting (at least for me: after all it’s food!).

But whats the deal with all these random people staring at us, or just at people in general. I’ve never felt so judged in my life, and I’m afraid that it’s a bad thing or that I’m a loser or something, as they just won’t stop staring! Apart from that we met a bunch of British people outside our residence: Luke, Richard, Matieu, Zahra and a bunch of girls that I don’t remember. Apparently they are all law students who are at URS and are from Ireland, London, and Scotland. That might be why I can’t understand a bunch of them no matter how hard I try to listen. It doesn’t help that Luke and Mathieu both talk quietly and shyly as it’s hard enough with all the French people yelling around. They seem nice, but I doubt we will see them much again, if we are lucky at least!

Tour today with Dr. Lee sucked, because he was going off to Paris to have some affair with some guy probably but at any rate he walked us around and we had no idea where the hell we were so it was just a blur. Now we know the types of places we would like to go, but don’t know how the hell to get to any of them!