After the very difficult wonderful dinner, CSI, and sleeping evening I thought that it would be really difficult to top. Well I am wrong as usual and I had another great day. The sun was shining, the birds were churping, the bees were fornicating; all a recepie for a lovey day! So after deciding that we were going to do the ‘classical’ sight-seeing things this day, ie the castle etc., we went to get milkshakes from McDonalds (greatest invention ever!). They are really cheap there too, so I was superduper happy. Strawberries *drools* anyways!

So we embarked on our walk over towards the castle region across the bridge which was crawling with tourists. It’s almost disgusting how many tourists where there, touching things that were dirty and just being annoying tourists. At least we didn’t look like tourists or act like them; rightfully so because then I’d feel like hating myself! So we played spot the tourist, with all the tour groups around and the like we tried to identify languages and just chit chatted about history and such whilst basking in the sun. I’m surprised that I didn’t get more burnt to be honest! We finally made it through the seas of toursits, and began the journey up to the castle, the way that wasn’t the normal one like the rest of the tourists (yes we hate them that much). 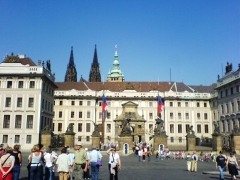 Stairs upon stairs upon stairs upon Russian tourists which smelt badly, we finally made it to the top with all the cobblestone roads not making it easy to walk. Despite wearing Birkenstocks, it was still a comfortable journey! Gotta love’em. We arrived just in time for the changing of the guard at Hradčanske Náměstí, and there were tons of Texan tourists. Couldn’t help but laugh there. The important part however was the interesting differences between Czech guards and British ones. These ones can look at whatever they want and aren’t statues. Sure they don’t move much but they are allowed to if they have an itch or need to blow their noses (seems less like a dictatorship to me! :)) But they still wear traditional uniforms and look like they are going to die in what they are wearing.

The building just behind was pretty nice, who knows what it was, because at this point Matthew just needed water. The closest water location had water at 99:-, and come on people it’s sad that tourists would actually pay that! It should be around 25:- at the most, but of course being a tourist area and having no choice they bought it. We held off knowing that we’d find better, and of course we did after keeping ourself famished for long enough. Torture equals goodness for all those who didn’t know!

We took the non touristy way around the back gardens which were lovely also because they were semi-secluded. The stones along the walls that you could lean on were very cold despite being in the sun, so of course we make jokes about hawtness and well yeah, use your imagination. Onward ever striving onward led us to more guards and an entrance way into towards the church; Katedrála Sv. Víta / Sv. Vaclav. Absolutely stunning archetecture with a mix between more modern classical and gothic status. Notice the gargoyles on the second photo which I assume keep away demons, but at the same time act as drain pipes for rain. What a clever invention those crazy Czechs! The small passages that we followed to avoid the baking sun were really nice, and included a good view of the city, as well as of what lies below in the quatiers. Further to that the steps going down were a lot steeper and slippier going down so I struggled down trying not to make a fool of myself (which I probably achieved in trying to avoid the weirdness). However, upon our decent to the older part of the city something caught our eyes, it might have been the flicker of us being blinded by the sun, but more likely the reflection upon water that we saw. A Quiet little courtyard hidden somewhere; so we went to find it! 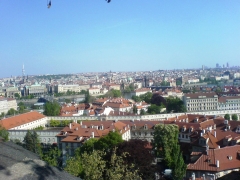 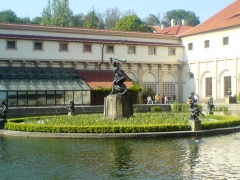 The view is spectacular, and the little courtyard was difficult to find. We made a turn into one that we thought it would be, which turned out to be a smaller weak one; but our observantness was able to locate one through another door (locked) so we went through the metro station and there was tiny little enterance. The sign told us not to bring a lot in, amongst witch was guns (funny that). So we went in and there was this huge square pond with tons of huge fish (I assume carp) swimming about and a nice little fountain. The quietness and serenity was gruarded by the fact that it was a hidden place name Vrtbovská zahrada, which was a botanical garden. Hardly anyone there, and the ones that were there were nice and calm and quiet. It’s nice to be away from all the touristy things.

Upon walking through the gardens I saw a peakcock with no feathers that was grooming itself and which led to a sort of maze in the grass which was very nice. There was something that caught my from a distance, which was rather funny, and no it’s not because I’m a whore, just because it made me laugh and made me think of something. What could three naked men wrestling amongst themselves with a snake make me think of? Robb of course! So after telling Matt this we just had a laugh and I took a photo, Robb is the one on the bottom being dominated (Haha TBB!) and what makes it all so ironic is that he’s afraid of snakes. So perfect beyond words! Yonder still from the statues was this really funky wall called the “Grotto” which was a man-made wall to depict several things next to the aviary. It was pretty nifty, and so hidden it made me feel special for us to find it! 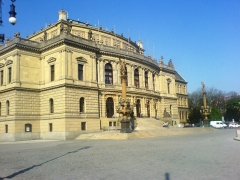 Above was this really nice statue for the Czech Republic commorating occupation during the Second World War, and the latter picture was the Opera House that I correctly identified the first time at complete random. It looks like one doesn’t it?

In other news, we had these really awesome little ice-creame things that were a mix between strawberry and banana, simply delicious and popular too, in helping with the heat that was killing me. Lots of walking does that to you I suppose, and then we headed home to take a little break before going out for dinner. Something that I forgot to mention was that one of Matt’s Czech friends, Vojta, stopped by to burn DVD for his brothers birthday (how nice of him). He’s really sarcastic, but nice, short-lived visit never-the-less. There was an incident with a large bee-like bug that got into the flat, and Matt being allergic had a little freak attack whilst we trapped it in a mug and took it outside. It was really funny; we gave it a name, which I don’t recall. I hope that it’s still alive and terrorising other people and bringing them such happy moments!

We were getting ready to go out, because he was taking me to Valentino’s after dinner, a nice club that I was very scared of in Praha 2. We had issues finding places that didn’t have tomatoes in the menu so we folded and went to KFC, which I haven’t had in forever so it was great! There were annoying British guys there playing eye-spy (?) and being loud and obnoxious. So we played the game to figure out where their accents were from. I failed miserably, but felt self conscious cause they kept looking our way; anyways!

So we head off to the club, which wasn’t too far of a walk. Amongst the streets there were people trying to pull us into their strip bars and such, and my experience in France with ignoring people actually helped. Just don’t even acknolwledge their existance and all is good. Interestingly the beggers actually get on their knees and beg here, much better than the lazy-ass sitters on the streets of Strasbourg. We went in and I was hella-awkward, but we went to get a coke because I was under the impression that I didn’t want to drink that night; I’d rather feel around and not worry about anything. The people that worked at the bars were nothing short of goregous, but a little self-absorbed, made me laugh of course.

We went down to the lower level as there weren’t that many people there, and sat down whilst talking we spotted serveral interesting characters. One of which we referr to as “Dreamboat” for obvious reasons to which I won’t go into extreme detail. Let’s just say that any artistic sculpture by any famous artist would be put to shame by this specimen of human. Enough said. So we stalked him for the evening, to pass the time whilst semi-dancing and observing what was going on. There was a funny video going on above the beer bar that interested me, but mostly the self-absorbed half naked people dancing on the stage whilst strung out made me laugh the most.

We left a bit early as we were tired and saving our energy for the following night; so we trekked the way back and then talked for many hours and finally went to bed. It was just nice evening filled with good memories and funny things going on all around!

My exams are over, and having 6 in one day was just about death. I had problems with some of them but despite all of that it doesn’t matter since I am going on vacation and I don’t care about anything else right now!

How exciting all this is don’t you think? I think I am going to struggle and get lost at some point but let’s keep a positive attitude here!

I will try to update some things, and take tons of pictures on the way, but in any case; I’m going on an adventure all by myself and I’m scared to the bone! Go team me!