Again I shit you not, readers. I’ve been to two weddings before in my life but this was my first wedding and reception that was going on! It was of my long-time neighbour who did her schooling in North Carolina. I was so excited for them since I knew her fiancé also, and I think they are so perfect for each other of course! 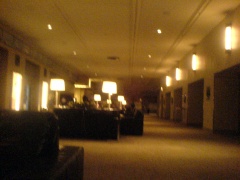 So dear mother and I decided to drive into the city and take transit downtown since parking would be a bitch. So we parked at Fairview Mall, also known as “Don Mills Stop” on the rocket, aka the subway. We made our way in, with my paranoid mother next to me. I swear she looked like she would have been mugged at any moment, but of course there was no risk on a sunny Saturday afternoon on our way to a wedding.

We decended from the train at the wrong stop and by consequence had to walk a long way down to get to the church, but we made it and weren’t the last ones, but the music was already playing. It’s okay since it took the brides-maides about 1 hour to make it down the isle, but it was a nice Polish-American wedding. We made our way down to the reception hall, The Carlu at College & Yonge and I progressed to sip wine and eat appetizers until I started to get a little tipsy.

Dinner was fabulous and the waitresses loved me since I was so friendly. We got sort of put in a table of people that nobody knew each other so we chit-chatted and such. Announcements were made and then we were off to have a party; quite literally. Since the bride and groom were only 28ish all of their friends were young, and all the old-fogies filtered out and seemingly dissapeared within minutes of dinner being finished. The DJ started to crank the volume and then we broke it down; literally.

I had tons of fun and danced tons, caught up with some old tennis friends, one of which was Clint which I was exstatic to see, and then we danced some more. Shane’s girlfriend introduced me to this drink which tasted like cherry, so I was up at the bar too much. I think I was even flirting with the person making the drinks, but nothing can be proven or assured.

We ended up leaving at around 1.30am I think, and made it home after 3. I had the spins, but I def. remember walking down the streets of Toronto think “Wow, I need to do this more often sans mère.” I was hungover the day after, but struggled aroudn to do some concerts and things; it all turned out okay! I love weddigns and I hope that I’m invited to more, damnit!

I haven’t been to a wedding since I was 7 years old, and that one was when I was in Göteborg, so it was quite different than Canadians seem to do it (or maybe just because I’m older)! Mom and I went into Orangeville on Friday to prepare for a suprised reception for my aunt and uncle who have been together for 25 years but only now decide to get married 🙂 My cousins Alison, her fiancé Bryan, and other cousin Cameron all were the ones to organize it, and my mom’s job was to take the two newly-weds and distract them for a few hours. She was successful and they had no idea that there was going to be a few huge tents on their farm property in the middle of nowhere!

So in my ‘grub’ clothes on and my aunt Vickie helping me which watching the two children run around terrorizing the 5 cats, we helped put up the tarps and set up the dinner placings while Alison and Camerson went to the wedding. The tent guys showed up late by 2 hours so we were panicing, and then before that when we went to pick up the cake they had forgot to make it so we were in a panic and arrived late. All turned out okay and everyone was happy when they arrived, since everything was perfect thanks to aunt Vickie and I 🙂

Alison and Cameron are what I consider my brother and sister, as we grew up together. Aunt Sharon and my mother are sisters, and they are more or less best friends so everytime that we went to their house or they came to ours we always wanted a sleepever so we would make sure the parents drank too much and then guilt trip them about drinking and driving. Despite the amount of times that we planned not to stay the night, it always turned out that way and we would be rebels and play Blinds-Mans-Bluff despite it being a forbidden game. We were crazy and reeked havoc on each other, with tickle attacks and sleepovers that I started to miss as we started to grow up and not see each other as often.

Having stated this, it’s been about 6 or 7 years since I hae seen Ali and Cam together. Usually one is working or moved out or something, so I was incredibly happy to see them both together and we had a blast, especially thanks to Ali’s fiancé Bryan who I have named the adopted brother 😉 Funny enough my bros and sis’ had a horrible and devious plan for me that I didn’t know about until it was too late!

They vowed that they were going to get me incredibly drunk since I’ve never done that before, and of course they didn’t tell me until it was dinner time, and it was too late anyways. I didn’t mind, since I was with family and they were drunk too, so I had about 19 glasses of punch spiked with champagne, and then some Aussie wines that were really dry. The result was me being drunk for the first time, and waking up relatively tired and cranky because of headache which I fixed with tons of water. They got me drunk, and tickled me until I was in pain, and then we just layed on the trampoline and had a good catching up which made me so happy, and I was lucky enough to meet Cam’s girlfriend Sylvia who was really nice too!

Our cousins from Kitchener-Waterloo came also, minus René who decided to be rebelious and move to Florida (to the chegring of mother and father) since he met the girl online and is getting married to her and living with her now. He was always a bizzare guy, but this just proves it and all the aunts and uncles can’t believe it since he was the nerdyiest of them all. Natalie (his sister) decided to bring a ‘friend’ who I think was named Chris and was an athlete like her. They totally fit together, and he was introduced as the ‘friend’ but we all knew that he was the boyfriend, but I coudln’t see how they could be dating. Aunt Bonnie and Gary would never allow that I imagine, so we eventually found out that they were in denial and told everyone that he was a friend just because they didn’t want anyone to think badly of her or Natalie.

None of us really cared since we were too drunk anyways but we named Chris ‘Dreamboat’ since he was fairly good-looking and ‘hunky’ as Bryan said. Having said this, he was a american-football player that met Natalie when they were playing real football on some team and he was the ref. He’s really short, but is really strong, but despite his ‘hunkyness’ I did notice that he had the grossest smile that was awkward and horrible to look at (sadly) and he had no personality! Aunt Vickie asked me about it, and commented that if I couldn’t get someone’s personality to come out, then they have none; so we figured that he was just a little bit weird. He finally decided to introduce himself to me (after finding out I was the favourite cousin) and shook my hand, only after joining in the tickle war with Ryan and Colin and the bros & sis’. I thought this to be weird, but whatever! The Botzang family is weird, so I will just ignore it and I figure that I will never see the guy around anyways so it’s not big deal!

Other than that, everything has been funny and I slept all day since I still had a hangover and slept like crap on the chesterfield. After I woke up I went on my run and took a different route, but since it was so hot out I wore very minimal clothing. I figured that since I have a nice body, I might as well flaunt it around; but too bad that everyone is away on vacation for the long weekend, that nobody saw! Oh well, and then I went to play tennis at the school and it was all good.

Mom went to another cottage to a friend of dad’s so I’m alone for the weekend. John and Marie (who’s not home) are having some people over at their house and I think it was 3 guys and a girlfriend who were gawking at me when I was on the back lawn stretching. I figure that I should have said hi, but they seemed drunk and I didn’t feel like dealing with 30 year olds who were drunk off their minds at 6pm. I might talk to them tomorrow when I’m in the back mowing the lawn and might ask them to come for a run, but if Marie isn’t home then I guess it will just be John, and I will be tired so we can do a short distance just so that he doesn’t keel over and die! 😉

PS: I will post pictures from it when Alison e-mails them to me 🙂