For any long term readers or people that know me, they will know that I’m a strong believer in the possibility of Male PMS. Again, women will laugh and get all upset but I’m serious about it. We’re talking about hormonal cycles.

It’s proven that men have hormonal fluctuations, and it varies per person, but they are less dramatic than women’s. Having said that, some people are different and ‘suffer’ a little bit more with levels of certain hormones and such.

Which brings me to this weekend; for whatever reason I’ve felt so exasperatingly lonely I can’t even begin to describe it. I don’t know why such a wave of uncontrollable emotion has swept over me; so I think back to my yonder posts on male pms and think that it’s a good explanation.

It’s neither triggered, nor indicated by anything else other than internal forces of nature that are taking me on a whirlwind. Why do people feel like this? Why is it fair? Why am I so alone? Why aren’t there people around me?

I’ve officially renamed February as not the leap month, or the love month, or the fornication month, or whatever the hell you people in society call it. I’m naming it based on it’s sex-mongering, and rejection. It’s been a long three weeks already, and PMS is starting to set it, but not before a plethora of rejections, abandonments, and just plain masculine ineptitude.

I’ve got four more days to fit in some more rejections, and or abandonments. Lets see how many more I can get in there? At present time we are riding on roughly 20. That’s once per day.

What does this make me think? I’m pathetic. U-( 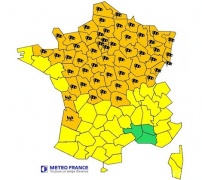 Keeping with the recent theme of anxiety attacks, horrible news, and all-around horribleness that happens to be called my life there are a few exciting things that happend. I watched Melofiestivalen from a few nights ago, and that lifted my spirits. And then throughout the night, something actually happend in Calvados. I shit you not. Something happend, and it doesn’t have to do with cheese or cows. I still am an awe. We have weather! And when I say that I mean something that isn’t the same thing that we have every damn day. The wind picked up to about 110km/h here in Caen, which makes me happy, because firstly like wind, and secondly something actually happened here. How exciting.

Anyways, Mello review to follow later in the day with screencaps as per the annual routine.

Back to the “news” of greatness. I’ve come to the surpressed realisation that I seriously need to see a psychiatrist. It has been festering in my brain since about the age of thirteen, and every time that it comes to mind I keep reminding myself that I firstly can’t afford it, and secondly will do it when I’m financially secure enough to. What does this mean for me? That its probably never going to happen, as I will never be in a financially sound situation. So is the story of my tragic life. I really need something like that. I have a lot of unresolved “issues” which I can’t get over and I can’t move on from.

It either comes down to me getting serious help, and fast (which Mt. Allison couldn’t do at all…), or I’ll just keep sinking into a hole and the final 18 years of my life will just be the culmination of my patheticness (if it even lasts that long). I did talk to the people at Mt.A when I was there, but the best they could do was give me a little pamphlet on how to deal with anxiety, and that I could see someone once every two months. Considering that the school year is only 5-6 months of the year that is not nearly sufficient. Bitterness alert. It’s okay for the rape “victims” to get the help they need, despite them going out every weekend and being whores themselves, but when it comes to someone that actually needs some help the best they can do is a little carrot.

I would say it’s not fair, but who the hell gives a flying fuck?

I’m currently feeling an anxiety attack coming on. What can be expected with my current male pms situation? I can’t handle being around people, I can’t handle the things that I’m dealt, and to make it better everyone else around me is having a pleasant time and I’m just me. And all that crap about “being yourself” and “loving yourself” is all bullshit.

Why is it truly that the world is against me and makes me feel even worse than I already do?

The best worst part about it, is that I’ve got nobody around. Which also means that I don’t have anyone to whom I can talk.

So another Pizza Hut tale to tell you, this one isn’t very funny but it mostly was the reason for starting male pms again, as well as adding another name to the list of misspelled surnames. I was ordered under the name THEEZ tonight, which was clearly off the wall.

Whilst I was in the resteraunt waiting for my pizzas, this girl walked in. I’d guess she was around the age of 30ish. She stared at me, stared at herself in the mirror, stared at me, and then had the nerve to tell me I looked ugly. So what do you think I did, before looking behind me to make sure that it was in fact me to whom she was talking. I looked right back at her and told her to drop 20kg, learn to put on make-up, and then she could come talk to me. She gave me a dirty look, but it shut her up. I did happen to notice the poor service she got from the guy at the counter too.

And what happend when I got my pizza? The cooker and the guy handing me the pizza shook my hands and told me I was the greatest ever for saying that. Go team!

Regardless of that, male pms setting in. The hormone parade is a’marchin.