Since September I have been living like a fool. I have a room with a bed and armoire, but I have no table in which to work. This poses problems for me, and thus I went to the IKEA website to search to see if there was anything available. I found the following, at a bargin of €19,95. 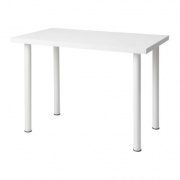 So what’s the problem? All of the IKEA locations are too far away, I have no car, and how the heck am I supposed to get a table from IKEA to my flat? Uff! Someone help me!

Once again I’ve moved and mostly am settled in my new home at university in Sackville, New Brunswick. Where you ask? Well it’s in the east coast near the boarder of Nova Scotia, still drawing blanks? It’s in the middle of nowhere basically that’s all you need to know.

I arrived a bit late because of thunderstorms, but it’s all okay now and I moved in, and slept on the floor for the evening. My stuff arrived the next day and I moved in and got comfy as quickly as I can. I originally was designated the downstairs room, which is huge, but since it’s not finish being renovated and it smelled like crap I decided to filch the upstairs room. It later turned out that the upstairs room has windows that open, which is very important for me as I sleep with the window open during winter, and it’s smaller. I like a cozyer space, and it’s good with the sunlight so I won’t get depressed as easily.

The downstairs room isn’t finished, but the windows don’t open (bad). I’m happy, but the only problem is that I have gross carpet and no wardrobe or closet. This means that I have nowhere to hang anything, and it’s terribly disconcerning. I have a lot of clothes left to unpack, and not having a place to hang things is getting on my nerves. There are no stores in which I can find things to make a hanger so I’m more or less screwed.

I found some cheap stuff online at IKEA but they don’t have them here in the East-coast, and they don’t deliver this far (I think). I will have to find out and talk to my mom, since the cheapest thing that I can find around here would be upwards of $120.00, when the wall unit at IKEA is at a maximum $57.00 and minimalistic. I must communicate and figure it out.

In our house we have pets, which I’m not sure about so far. I’m allergic to cats forsure, but I’m unsure of the dog. The cat scratched me and I puffed up so I know forsure about him, but the dog seems fine also it’s kind of stupid and spastic. My room is thus far a no-pet zone for at least the cat until I figure stuff out. As a funnier note, my door doesn’t close so I have to put boxes as a barrier outside it to keep the animals away. Funny that eh, funny that.

The house is alright, but sort of ghetto and under repairs, the previous tennants didn’t take very good care of it, but it could be a hell of a lot worse! I will post pictures when I find space for things… It could take awhile! 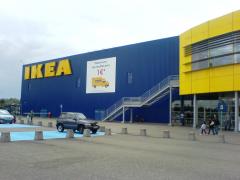 Apparently since Wednesday things haven’t been so exciting. And why would this be you ask; because I’ve fallen ill. I thought that I could escape it and keep myself healthy while here, but I suppose it was inevitable! Thursday morning I woke up and was feeling a slight scratch in the back of my throat, but I thought it was just some dryness since the air here is really dry, but as the day progressed I found my sinuses going crazy and then getting excessive nosebleeds. It turns out I have a cold, but of course this didn’t stop me from going out on Thursday night, the night of parties in France since everyone goes home for the weekend. So Nic and Sarah send me a texto saying that they are going to the Salamander at 23.00, so I think, fine fine I will suck it up and go have a good time just becasue I was bored and stressed from school a bit.

I got ready, and we all were late that day, but I was mostly just a bit irritated becasue my teachers aren’t being really clear about when something is ‘due’ and when it’s ‘due’ to be handed in. Apparently we are supposed to read their minds, regardless I managed to get everything handed in and nothing too crazy was happening. Right, so getting ready and then we were all late and we walk over to the Galia after visiting Zara and Matthieu who were going somewhere else. We said hellos and then left for the party, and of course as always Nic has his huge entourage with him. Whole bunch of Americans were there, lets see if I can remember their names. The were Sara from Rhode Island, Jessica from Syeracuse, Sarah from Maine, Lisa from God-only-knows-where, and then some random girl who I don’t even remember being around us that night. Anyways, we get to the disco and Ginette’s mom calls her mobile so she ditches us for awhile and we go in and it’s lame to the max. Apparently it was Economics night, and everyone there was weird, and it was mostly guys just sitting around, but the most disturbing thing was the fact that they were playing 80’s funk. When I say funk, I mean serious funk that it’s impossible to dance to, so after ‘attempting’ and clearly the rest of them not being drunk enough to continue they go and ask the DJ to change it and he says ‘I’m not allowed’ so we are all thinking ‘lame!’

BNP Paribas sucks, we went there and Jeremy was waiting for Ginette, and hopped up quicker than I’ve ever seen anyone jump up before in my life! It was really cute, and then he got her to sign some stuff and gave her some stuff also, plus I had to cash some travelers cheques (the woman got confused). Plus Ginette was too chicken shit to ask out Jeremy to show us around or anything, so I was sour all day. I wanted to make new friends and she just bitched at me about being awkward and such, but we were dressed nice and ready to impress.

Then we went to IKEA, and I bought a lot of things. Useful things, very very useful things, and that’s alwasy a positive note! We looked around and then I saw the most amazing thing; a huge whale plush animal. I simply had to have it, but I didn’t want to fork out 29 for it, however I did, and we walked home with it under my shoulder and it was amazing. I loved it, and I made so many people smile because I was carrying a huge plush whale. Who wouldn’t love that (end rhetorical question)!!

Anyways, we got back inside and I think that I napped (not sure) and then we went to go to dinner, but I couldn’t find my CROUS card, in other words my meal card. What a pain in the ass it is to rip my entire room open for it, and not find a bloody thing. I will continue to look, but I’ve lost all hope and I doubt that I will be able to find it ! 🙁 This means that on Friday I will have to go and cancel my old card and obtain a new one. Such a pain in the ass for such a small thing. I wish I could just not have to worry about it like old meal hall. *sigh wiggle wiggle*

I’ve also noticed a really ugly girl across the window that sits at her windowsill and smokes. Firstly, I don’t like people who smoke because it’s annoying in at least in Canada there are some laws about it preventing people from doing it (which is nice), but here in France it’s so widespread I can’t understand!