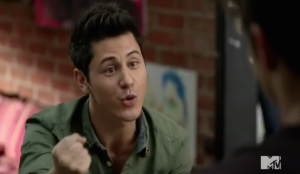 “That’s just the straight guy resistance to talking about your feelings… push through it!”

So I’ve been following this series lately, and as usual I’m super behind on anything cultural. This one got me laughing and equally emphatically distraught: Faking It. Leave it to American MTV to make up a series about two girls that pretend to be lesbians in order to get more popular at school. Of course, one’s really a lesbian and the other is faking it and starts an affair with the hottest guy in school who only likes her on the pretext that she’s a lesbian.

It’s got great lines and has ridiculously outlandish storylines and twists that give you whiplash, but it’s got half decent writers who have good one liners.

For instance one of my favourite quotes from the most recently seen episode:

“That’s just your straight guy resistance to talking about your feelings… push through it!”

I watched it about a million times to make sure I could us the same sort of enunciation and stress. I’m surprised I didn’t come up with the same line myself. Bitch, plz.

So it brings me to my point; people fake a lot and sometimes don’t even think twice about it. The characters in this pseudo-drama seem to have guilty consciouses, so I guess that says something about the future of humanity, at least a little bit. Despite their horrible life choices, at least there is a moral.

Fake it till you make it…

Oh wait, that’s not the lesson… but it’s a good strategy in the interim.