Facebook is a daily activity for me; it’s scandalous. However, I encountered the problem today outlined by the screencap captured at the moment of submission.

Facebook denied me the ability to list myself as being in a relationship with myself. Major fail. This is tragic because I’ve been married to myself since 2007 and Facebook won’t allow me to display my awesomeness to the world. And for that it’s a major fail and I’m denouncing it.

If you have any idea what I’m talking about, please see the following post (click the link to see). 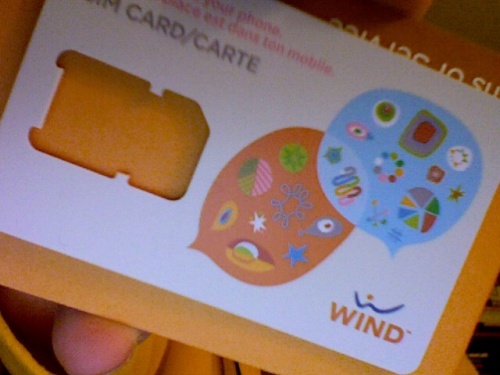 I recently stopped over to a little kiosk in Toronto to pick up a SIM card for my new Nexus One phone… (not pictured at this point) which is of course available in Canada yet, but I managed to land it.

In any case, I picked my plan, got my no-contract unlimited deal, and my first month free. So far I’ve had no problems with my service at all, except for the lack of ‘home’ service in my town, which will eventually come they tell me this year.

Otherwise the unlimited 3G and wireless connections suffice for me. I find myself tweeting on Twitter more, responding quicker to emails and Facebook messages. Eventually I might even blog from my phone. It’s become invaluable, and it’s so great to have a Canadian phone number that is local (for the first time).

Just a shame that I don’t know anyone here that can call me, or that I can call…

I’ve seen some recent photos on Facebook from some of my former colleagues, and I just have to make some general comments about Canadians and their cliché traveling habits. The Dominican Republic, albeit probably pretty, is such a horribly cliché place to go. It’s Hispanic, and the only place that you can fly to without a passport these days; thus tons of Canadians go there. In addition to that it’s cheap, and that makes it, in my eyes, really the worst place to go. If I were them I’d want to go to St Nevis, or St Kits, Guadeloupe or Martinique. At least then you can feel important going through customs and immigration with a passport. Yes that’s right you small-town Canadians without passports, I said it!

If you’ve never gone through customs (US Border Crossing doesn’t count), then you’re lame and your lameness needs to be remedied very quickly. If you haven’t gotten you passports yet, you probably should otherwise you will be stuck in small-town Canada for the rest of your life. Wait, after having written that, you don’t even need to get a passport because chances are you won’t leave anywyas. Bwahaha! I am so mean.

Anyways, bottom line I’m sick of seeing the same boring “lets get drunk and learn Spanish words for beer” photos. Cliché and quite tacky, especially considering people clearly don’t know what the hell to wear when they go on holidays. Rainbow coloured moo-moos, Hawaiian shirts an the like are unaccepted methods of dressing oneself. Learn by watching fashion shows such as Queer Eye for the Straight Guy, and you will learn monumental lessons that will serve you better in the future.

So I’ve just watched a really funny and lovely film called The Curiousity of Chance, and I loved it. It’s different, it’s funny, it’s dramatic, and it even has glitter. And through watching this film I’ve become a new fan of the actor, Pieter Van Nieuwenhuyze, who plays “Hank Hudson” in the film. Unfortunately very little information can be found on the actor, except for some stage productions that he was in, but I presume he’s Flemsih, and if not Flemish than Dutch. I’m a lingust and can tell where a name comes from. “Nieuw” gives the Dutch aspect away, and as well as “Pieter” but the rest remains ambigious.

Being the creepster, yet classy, person I am. I did a google search for him, and low-and-behold I came across his Facebook profile; isn’t that hillarious? Anyways, I’m a true weirdo because I sent a fan-letter to him via Facebook. I don’t expect it to be read or responded to, but I still think it’s really nice and funny! The photo montage will follow at the end of this post, from the film, should any of you want to see whom I’m talking about.

Who can resist the dorkyness of it all? With a cute dutch accent, and a clueles aura, the character of Hank Hudson is embrased by the main character Chance Marquis, an excentric American student at an international high school in Belgium near Antwerp. As a transfer student, the hell begins.

Whilst doing things that the characters aren’t supposed to be doing, they stumble across a drag show; that’s right, here comes the glitter! And they go into the dressing room, it’s so great. Drama drama drama. But then, what happens, but the cluelessness is taken over by beautiful green eyes, and the fact that photos are leaked to the public of Chance in drag. This is all because Hank has a crush on the boyfriend of the football captin who’s been making Chance’s life a living hell.

Finally Twila, and company want to find out what happend to Chance, who’s been hiding out because of the leaked photos. They think he’s dead, and with her sarcastic tone, that often reminds me of myself, the film ends in a splurge of good tunes at the battle of the high school bands. I love the cheesyness! All ends well as everything ends as it should, and they have to “bone up on their Barry Manilow” for a gig that they have coming. Go team!

It just may happen that the star himself passes by this blog, and if so, then hello Pieter

Please do leave a comment, as I’d love to have some record of contact with famous people!

What have I been doing lately? Working and updating my facebook status to say the following; which is the greatest thing ever:

Bask in my fabulousity!