Despite the fact that my friends don’t appreciate this fact, or particularly know who the celebrity is, I’m still proud to announce that I met a celebrity. 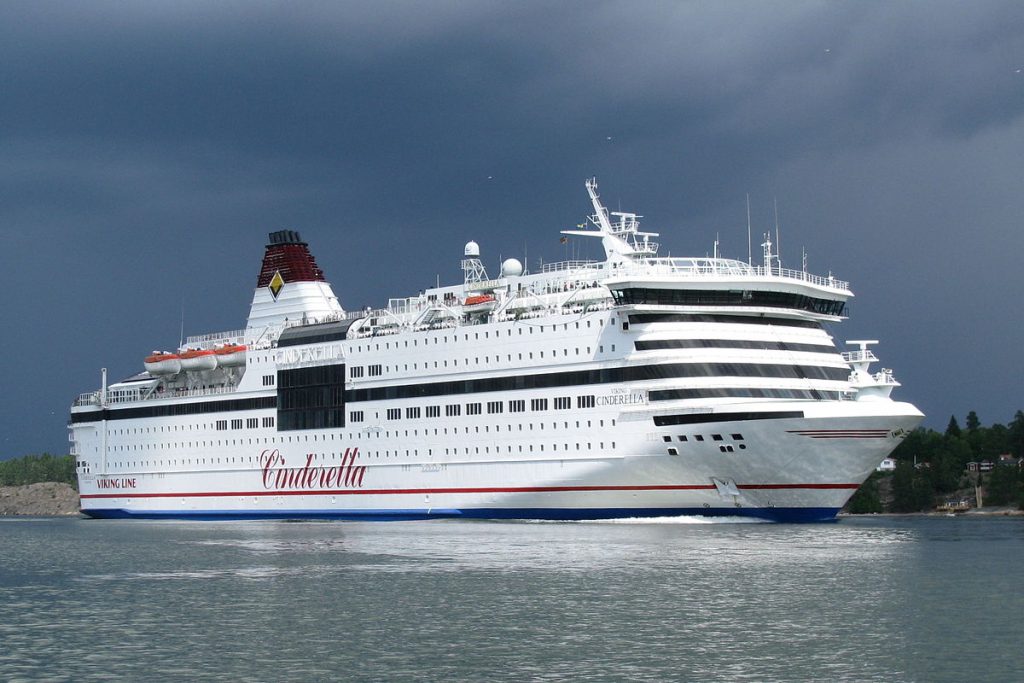 I was on a party cruise, Viking Line’s Cinderella to Mariehamn, and to my surprise a musical artist and dancer that I’ve seen on TV and Melodifestivalen was the featured artist. I naturally got excited at this surprise and I of course made a point to be there before, during and after the performance.

His name is Oscar Zia and he is well known in Sweden, but not by foreigners. He sang with a neat cover band, and after his performance he appeared on the dance floor with a few friends.

My colleague and friend Elin saw this, and based upon the fact that I earlier said that he’s so cute, thought it was incumbent upon her to insist that I kiss him. Of course that was a crazy idea, being a stranger and all, and more importantly a celebrity (knowing how much crazy attention celebrities sometimes get). I rejected her idea. She persisted.

The next thing I knew, she grabbed me by the arm. Suddenly I realised that she also grabbed his arm and turned him around and then suddenly pushed us both together. Face-to-face with a twenty-year old extremely attractive celebrity, I stood completely still and in the balance held the pregnant awkwardness. I said hello, and she screamed for us to take a photo.

To give you a sense of how hot this guy is, here is a photo.

And so we took a photo of us together, and I said thank you and moved on, embarrassed and shocked. Elin persisted and still thought I should kiss him, I laughed at her and said that she’s crazy.

And for the next 45 minutes or so (at least it felt like a long time), Oscar and his posse danced basically right next to me and the girls. My crazy dance moves seemed not to deter him or his group, and I was having difficulty believing that I was so close.

Elin persisted and kept telling me that I was sneaking peeks, and admittedly I did. I mean the guy is a 10, and I felt embarrassed. She seemed to be convinced that he was looking back, but I’m skeptical. Crazy dancing continued, and honestly I was most surprised that he didn’t run away like most people do when I’m dancing around them.

You may think, “What the hell is with this guy” or “What’s wrong with him”? Nothing, I just dance really expressively like it’s my last opportunity. It’s a bit intense, I suppose, much like me.

And so, upon reflecting on the evening who know’s what happened, or is going to happen. Maybe he was flirting with me and I didn’t realise it, maybe he thinks I’m a creepy fan (but I don’t think fan is the right word), maybe he thought I was flirting with him without me knowing, so many questions and only time will tell.

Or maybe it won’t…

It’s very apropos to dine out on a celebration of birth, and for me it was noteworthy for the first time in a really long time. My lovely sister was in town (read relative geographic proximity) and we spent the day together frolicking in search of sanity and trendy clothing.

As I cowered from the sun in vampiric fashion, in other words literally leaping for every shadow known to mankind due to multiple sunburns, it was commented on many occasions that I had a sunburn on my face. Due to it’s colour of bright right, my initial reactionary response was “No Shit Sherlock” but due to that not being socially acceptable, and not wanting to be overly prickly, I just rolled with the punches and let it slide.

Moisturiser was obtained, and despite awkwardly applying it in a food court while onlookers look at me with confusion and/or disgust (how is this different than a day in the life of me?) we continued onward to obtain much needed alimentary nourishment.

The choice was legendary: The Pickle Barrel – Atrium at Yonge & Dundas. Why is it so noteworthy? For reasons which will be disclosed herein, but most notably free pickles.

As we were seated, we were welcomed by a frazzled looking employee named on our receipt as “Lounge PM.” As we thought about our drinks and chatted unceremoniously, I couldn’t help but notice that our wait-staff member had a cast on the arm. Because we are both so clearly socially awkward, I asked what happened. Our server recounted an incident with a car, which ended up a draw, and which resulted in obvious injury on both sides. Confirmation: work required on car, and cast on arm.

I won’t lie, we were laying it on pretty thick and being flirty. The thought of further aging is depressing, and I don’t do it very often, but in the presence of my unfathomably beautiful sister, I couldn’t resist. We debated ad nauseam to whom reciprocal flirting was directed, and since it’s well known that I don’t take compliments well or think anyone could be interested in me, my answer was without question: her. As expected, her response was the opposite: me.

Regardless of this, we went through the massively intense menu – that is for lack of a better word epic – and I decided I had questions. At this point, it was obvious that we were making our server nervous as voices quavered, and nervous glances were aplenty. What’s the skinny on this Sundried Tomato Burger? Confused look again as my pronunciation of “tomato” is clearly not understood. It’s smaller than it looks, you aptly stated. The atmosphere was flustered.

Our appetizer arrives and is delish – those Avocado Spring Rolls – take mental note next time to order these! As I was melting in these deliciously and somewhat healthy choice, I started to comment on our server; I was clearly interested. Only downside was the Barbara Striesand nose, which resulted in much laughing on our parts. I think I can look past that (pun intended!),

Our meals came and I requested malt vinegar. Server disappears to fetch and returns with white wine vinegar. As we exchanged nervous glances at each other, there was a clear fear in our servers eye, then confirmed by “is it the right one?” I laugh because our server doesn’t know what malt vinegar is, but we learn quickly that it’s actually called “Fish & Chips Vinegar” on the bottle with no mention of malt – weird eh? At this point I’m bewilderingly charmed.

And then my moment of absolute clarity and ridiculously arose: “Excuse me, could you hook a brother up with some pickles – you know – the really good juicy kind?” Needless to say the one slightly drupy pickle served with my sandwich was insufficient, and since we were at The Pickle Barrel, I wanted more… pickles. My pickles were delivered ceremoniously in a Bud Light beer glass, held together with a toothpick in a very artistic and loving fashion. Needless to say at this point I was enamoured.

Cue more flirty conversation and wondering if we would be charged the pickles, which I believe are normally a side dish. Cake was ordered and more awkwardly adorable conversation continued, until it was time for our server to collect our plates. The pathetic nature of my existence came out when we crowded my plate with the beverage glasses from the table. The goal was to make it more difficult to get the plate, and thus keep our server at the table a bit longer. Success was had and I relished that extra 2 seconds.

Words can not express how much amusement we had with our server, and when I saw that the pickles were not charged (!), a tear fell on my sun-kissed skin. What does this mean? Did our flirting go noticed? Was it a message to be further looked into? I doubt it, but a boy can dream can’t he? I got comped pickles! :wave:

Bathroom breaks were taken and as I was alone at the table our server approached and we engaged in a conversation regarding my painful sunburn. A pesky blonde curly haired co-worker hovered and interrupted our conversation, and as I was left alone I scowled and cursed that skanky ho. 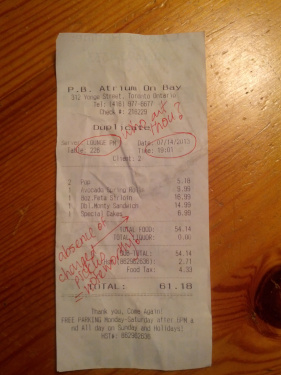 To my mysterious “Lounge PM” : thank you for your attention, your fun attitude, your free pickles, your personality which I’m crushing on (and which put a smile on my face) and most importantly making my day infinitely better with your presence. I would gladly enjoy the presence of your uplifting personality at any time! You made my birthday memorable, in a train of birthdays that are far from memorable! Who art thou?

Be thankful that we withheld our instincts and decided not to ask to sign your cast. I will likely never see you again, but I will never forget these moments that are dear to my heart. Whenever I taste a juicy garliced pickle, I will think of you!