Today’s post bringing awareness to asexuality talks about the confusing part of the ace community: the spectrum. Much like an other spectrum, it’s a fluid scale ranging from one side to another based on a set of criteria. Inside the asexual community there are different ways to identify to help communicate feelings and what people want or don’t want in terms of relationships or emotional needs.

The Huffington Post did a wonderful infographic which is posted below, and I will try to explain a bit. 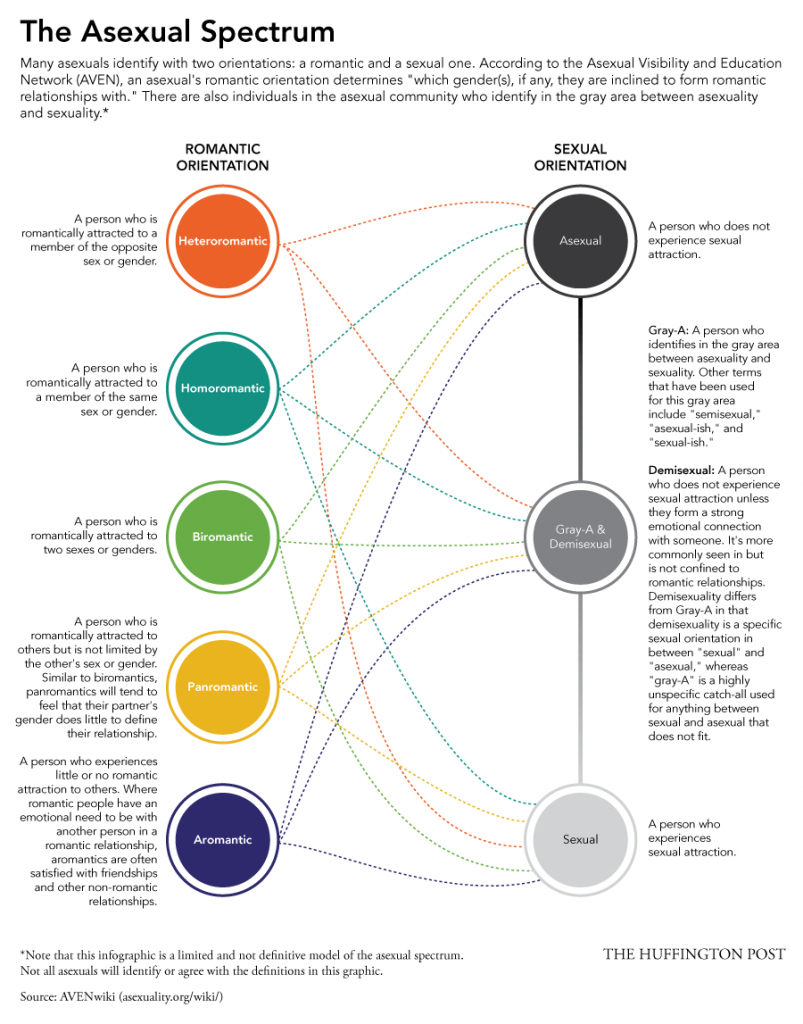 Some asexuals have romantic attraction, “warm fuzzies,” or “squishes” that are purely based on personality and emotions. It’s essentially a desire to have a romantic connection to another individual, but absent of sexual desire. In the allosexual world, romantic attraction is usually something that goes along with sexual desire, unless it’s a hookup type situation. What’s easy about understanding romantic orientations is that they use prefixes that are already common in society today. This helps to describe what asexuals might want in terms of romantic connections.

A heteromantic asexual is romantically attracted to people of the opposite sex or gender. This is the most common type of asexuality.

A homoromantic asexual is romantically attracted to people of the same sex or gender. This is the least common type of asexuality (especially for men).

A biromantic asexual is romantically attracted to people of both sexes or genders. This is less common than heteroromantics but more common than homoromantics.

A panromantic asexual is romantically attracted to people regardless of sex or gender. This basically means that this type of person doesn’t regard sex or gender to be a defining part of their attraction. It’s similar to biromantic, but in itself different and one of the more complex and personal orientations.

As if that’s not confusing enough, the idea of the spectrum and sexual orientation fluidity helps to describe and explain how people change over time. During periods of sexual transitions, allosexual people change from being homosexual to bisexual, or heterosexual to pansexual depending on their preference and desires at any given time.

When thinking about romantic orientations it’s also a curious way to describe certain people that seek out romantic relationships with people outside of their sexual desires. For example, a heterosexual man (would have sexual desires for women) but might be homoromantic because he has romantic attraction towards men but aren’t sexually attracted to them. It might seem a bit strange, but any combination works.

The VlogBrothers on YouTube did an excellent explanation of sexual and romantic orientations, and even gender in their video “Human Sexuality is Complicated.” And for a cisgendered heterosexual man, I’m pretty impressed about how much he knows about the subject and shows the differences of social norms, romantic, sexual, gender, and sex differences and similarities. Have a look at his video for a bit more information:

Now that you understand the basic idea of romantic attraction we delve into the difficult to explain world of grey and demisexuals. Often the source of much debate within the asexual community, and clinging onto the idea that sexuality and orientation are spectrums, the idea that grey-asexuals could possible exist, and do.

Demisexuals identify as people who do not normally have sexual attraction, but do when they form a strong emotional bond (possibly even romantic) with another person. The easiest example that I can provide is two people getting to know each other, one person is not necessarily sexually attracted to the other, but perhaps when they develop a strong emotional bond, sexual attraction can (not always) emerge.

There is an interesting article posted by Marie Claire entitled “The Demisexuals: ‘It Takes Me Months To Feel Sexually Attracted To Anyone’ that is worth a read if you’re interested in more information. It is written from a female perspective, but if you keep gender out of the picture (because males can be demisexual too) it holds true.

Grey-Asexuals identify as people between asexual and sexual, possibly meaning that they experience sexual attraction sometimes or during specific but not prolonged periods of life. It’s kind of a “catch-all” orientation for anything in between and is often a confusing and difficult to communicate or understand orientation.

And so many this has taught you a little bit about other people, or hopefully even for yourself because it’s possible that you could be a cisgendered heteroromantic heterosexual male or even a transgendered biromantic heterosexual female. While it’s not necessary to identify as any of these long-named orientations, once you have the toolkit of understanding them you can unlock a huge array of different types of relationships and people that you didn’t understand and now can connect to in platonic, romantic, or even sexual ways.