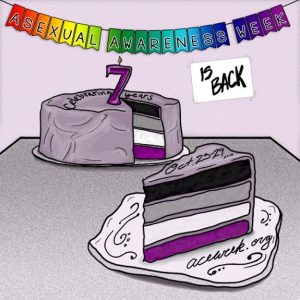 It would seem that no other minority is more underrepresented or misunderstood as the asexual community. This week, beginning October 23 through to October 29 marks an educational and awareness movement called Asexual Awareness Week, or #AceWeek that aims to help build awareness about asexuality and its community members and to help educate the allosexuals of the world.

To get started, here is a bit of basic information that you may or may not be aware of about asexuality. Asexuals represent approximately 1% of the human population and represent an sexual orientation for people that do not experience sexual attraction. While this is very difficult to understand, asexual people explain romantic and sexual attraction as separate entities, because well they are. For most people the two are synonymous or connected, but sometimes they are not. Allosexuals can be sexually attracted to someone and not be romantically attracted to them, right? Cue hookup culture.

Some key vocabulary:
And a TLDR summary

Now that you know a bit about the terms, we can move on do the topic of today’s day: Coming Out. Normally associated with the LGBTQ+ community and publicly announcing ones orientation as being non-assumed as heterosexual, coming out can apply to anyone when it comes to disclosing something about oneself that is otherwise assumed due to statistics or commonality. Asexuals can come out, and often do it, leaving people on the receiving end of a confusing confession about their feelings. A popular YouTube celebrity, Ricky Dillon, who was assumed to be heterosexual or homosexual for awhile, came out on his channel in 2016, which can be seen below:

Ricky describes his experience in relationships and not having sexual attraction and feeling like he was pressured into a mould or form due to society and social pressures. While he doesn’t articulate asexuality in the best way, he shifts from sounding aromantic to heteroromantic and back again likely because he’s still discovering himself. What’s important is that he was brave enough to talk about his feelings in a public way, fearing possible social backlash and negative attention. Hopefully he hasn’t experienced that, but like most ace people, probably are on the receiving end of confusion, misinformation, ignorance, or sometime even hostility.

A community resource named the Asexual Visibility and Education Network (AVEN) is celebrating its 15 years of operation and focus of bring visibility and helping people understand themselves and find others with similar feelings, experiences, or orientations. It’s a wonderful place with many members, old and new, that share their experiences, thoughts, and try to navigate the difficult and confusing hypersexualized world in which we live.

So in the spirit of “Coming Out,” if someone comes out to you in person, on social media, or in mainstream media, start a conversation to educate yourself; don’t probe, but ask questions to learn more and erase ignorance and open a dialogue with your fellow human. We all come in different shapes and sizes, and the aces celebrate with purple, grey, white, and with a lot of cake (it’s an ace thing…). Promote tolerance, acceptance, and open-mindedness in all corners of the world to make it a better place.