It kind of hit me like a ton of bricks a few weekends ago: I’m a full time resident of China. Sure I pay taxes in 3 jurisdictions, but I spend 10 months out of the year in China, so it’s no wonder I feel like I belong here.
I defend my village vehemently against the onslaught of local and expat hatred (“bum-fuck-nowhereness”). I live here and I’m proud to be living here and over the last few months or so I’ve discovered why: because I’m involved in the community.

So how does one go about involving themself in a community when they don’t speak the language, know next to nobody, and have no idea what’s going on in day-to-day life. It’s more simple than you might imagine; find an interest in something, seek it out and take chances. It sounds easier than it is, but it’s really just about keeping your eyes and ears open for opportunities. 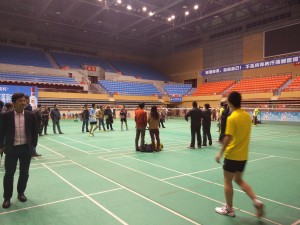 For instance, I had the opportunity to compete in a badminton tournament for the city. I played well but the cunningness of the Chinese overwhelmed me; either that or I was placed in the toughest round robin group with Number 1 and Number 2 from the city’s badminton league. The man I lost to in the first match ended up winning the tournament. It was played in the “Olympic” Dagang Stadium, which is the most unolympic thing I’ve ever seen. It’s gorgeous and I never would have had the opportunity otherwise. 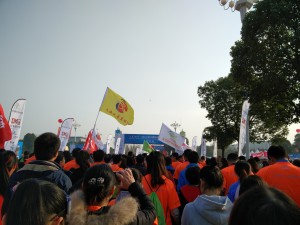 Then an opportunity to participate in an international marathon came up. I thought about it for a second, and not being a runner I kind of brushed it off. Then I realized, why not? I had been exhausted for so long, but there really is no harm in running 5km, 10km, or a half marathon of 20km, right? I entered and participated in the 5km run and finished in less than 30 minutes with no training. Enveloped by what was rumoured to be upwards of 5’000 people dressed in uniforms, or cosplay, or with cigarettes in their mouths, I was one of them.I went in with a simple goal: pass a few hundred people. I ended up passing what I estimate to be 2’000 runners, most of whom were walking and/or giving up or cheating. I was very proud of myself, but I regretted not doing the 10km run. I reckon I could have done it, albeit slowly.

And through these two events, it just hit me like a ton of bricks. I am a resident of China. I commute to work. I go to the market. The locals recognize me and don’t point anymore. I don’t speak Chinese, but I don’t necessarily need to. I make friends, and meet new people, and see familiar faces, and I never would have thought it was the case. Somehow, against all the things that were against me, I became a Chinese resident.

I suppose the only thing that would complete the trifecta would be dating, but I fear that might be a hypothetical story better told under the influence of plum wine.