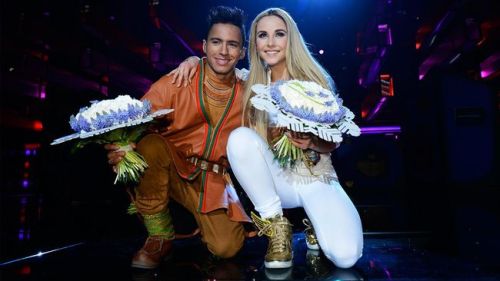 Plagued by the generally boring entires thus far in the year, the hopefuls for this third week of qualifications bring us more ballads and copycats. But two stick out as appropriate and personal favourites for me this week. I feel loyal to very few this year, and my reflections demonstrate that fully.

When I heard that she would be heading into the competition with a song that is more her style I was a bit unsure of what to expect. When one introduces their own style usually that means that its not a copy of someone else, but this entry clearly screams Euphoria-wannabe. The chorus and repetition of insomnia is annoying, and although the stage presentation appears good, vocals were very nervous to start off but came into themselves. While she can sing, its not original enough or good enough to have qualified or to have garnered my respect as a musician. Better luck next time, Ellen.

Another WebJoker entry, this one actually is quite good but failed to gather enough attention. While this entry by far wins the glitter award for having the most, Im a bit surprised that it didnt rise to be a bit better of a standing than 6th place. The song is good enough, but really doesnt have enough exciting material to sustain our attention for long periods of time. He can sing, and seems pretty at east with the microphone, but ultimately there are better songs. Thomas G:son and Thomas Karlsson did alright, but I dont really get where they are going lately.

With the biggest forehead of the competition, a bit unwelcome to Andreas Weise. Let me be clear, I hate ego and I hate people that think they are the shit. This guy is not the shit and he brings a shit song to the stage. The whole time I felt like it was some sort of pathetic Martin Stenmarck Robbie Williams wannabe track. Hes super bro about how much he loves the song and thinks hes the greatest thing since sliced bread, but I see right through it and I dont like what I see or hear. Take your big head (and forehead) home and hit it a few times against the wall, or knock it down a few pegs. Sadly the pubic liked this song; probably because hes an Idol graduate and he needed up in the second chance round – boo Sverige.

This song is a self professed best song that hes ever sung in Melodifestivalen, and I would flat out agree with him. Hes been in the contest a lot but sadly its faired quite poorly in recent years and when it turns out that he comes out in 7th place with an actually pretty good song that I was enjoying, I think its safe to say that we wont be seeing him in Melodifestivalen anymore. If we do Ill make a big kerfuffle about it, but really I doubt it. I liked the performance and the song – simple, strong, and executed to perfection. A bit boring but Andreas isnt into big shticks and this one is no different. Im a bit surprised at how big his hands look on camera, but I assume that its a light on dark effect. You know what they say about guys with big hands they engulf small microphones.

Im going to preface this review with the utmost of respect, because it all goes downhill from there. Having competed in Junior Eurovision Song Contest is wonderful, but what the fuck is this? For a 16 year old, right from the get-go I was thinking hooker plz with that incredibly inappropriate costume. Since when do we allow 16 year olds to wear bras and show their belly buttons and tight pants while wearing a huge pink boa that you would see on a stripper, on TV? If SVT had anything to do with promoting this entry, shame on them because the whole performance made her look like a whore. The hips moving, the outfit, the song which is just rubbish, and to top it all off the Swedish public bought into it. I shake my head in disbelief with this one. By the way, did anyone notice how the contoured shape of her nose makes he look like a drag queen? Just sayin

Came out and owned that stage and delivered a strong peformance that is worthy of putting her directly into the final, and alas shes relegated to the second chance round. A strong song, with amazing vocals, and an imagine that oozes a classy (unlike the last entry) sex appeal. Frederik Kempe and David Krueger nailed it with this creative and new song that didnt make me think of anything else. Its original, its fresh, its performed amazingly, and its sad that it didnt get the attention it deserves. Heres hoping that this one makes it out to the final, because its a hell of a lot more deserving than the automatic qualifiers.

Bursting out onto the scene a few years back is this Sami reindeer herder who jojks. The closest comparison that westerners would have is a native yodeller. Its original, its fresh, and its got an incredibly charismatic and shy singer. I went back and watched his audition for Talang Sverige 2014 when he sang a song inspired by his late best friends death. It brought me to tears, and while there wasnt much going on with this performance its captivating. Being an orphan in Columbia and being adopted into a Sami family is a touching story to show that hes come so far. This is by and far the sentimental favourite so far of the year, and I buy it 100%. While some might think its a novelty, I feel it and I respect the image infinitely.

Again suffering from the awkward timezone differences, its only further pained due to Filippa Barks awkward hosting of the green room. I really hope that SVT fully intended this to be down time that makes me want to pause the stream, because thats the result. I want to see less of her and more of the artists – you know, like actually them talking.