I have been invested in the World Cup 2014 hosted in Brazil this year, following the last week of matches and teams celebrating for advancing and commiserating in their defeats. I couldn’t help but take a moment during this to reflect on something that is more widely important that football; human emotion. 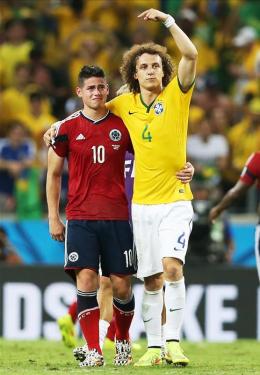 Imagine this, the superstar of the Colombian national team who has scored in every single match, break down in tears after a loss to the host country Brazil. That is what happened today with James Rodríguez breaking down in desperation after the loss. Consoled by his defeaters, among others, David Luiz, embraced his fellow footballer and exchanged jerseys and drummed up support and cheering for his beaten opponent. Apart from sportsmanship, this shows something important that might be missed by other people.

Though devastated in his defeat, among other things, and desperately trying to hide his tears from the cameras an the crowd, this moment highlights the importance of crying among men. In my experience observing male interactions in society, I have noticed that men are emotionally guarded, sometimes stunted, and incapable of articulating emotions. They often appear cold and despondent, and in times when things get tough or “down” their frustration and angst is demonstrated by aggression which is a useless emotion.

In the meantime, the more of men that I see cry the better.