After a tad bit of nostalgia, in other words, watching past DVDs of Eurovision Song Contest I have decided to take on the task of retroactively reviewing the competitions from past years. Thanks to my good friend Tobias, I obtained copies of the shows so that I could watch and not just pay attention off the CDs.

And so it begins on the evening of May 19, 2005 in Kiev Ukraine the 50th anniversary of the competition began and so began the music. 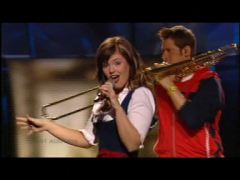 I suppose that one could classify this song as some sort of folkish music with a modern beat features some yodelling and some sort of traditional brass band accompaniment. I can’t really see the appeal for such a song, but given that it didn’t qualify for the final I wasn’t the only one. Although the singing was above average and it was mildly entertaining, a wash-up in general.

Lithuania – Laura and the Lovers 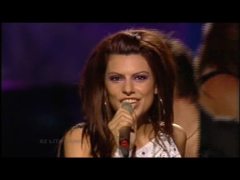 A bit of a feel good favourite this song crashed and burned in the semi-final coming in dead last with the least amount of voted points. I could take a few stabs at the lead singer and her hideous purple eye-liner but I will just leave it at the simple conclusion that the stage performance was a mess and not really all that thrilling. 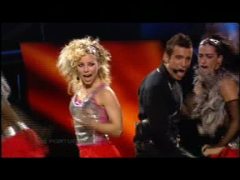 As usual Portugal came to the competition with absolutely nothing, and quite honestly year-by-year (besides Poland in the 2000’s) is a consistent “go home” song presented this time by two singers. I don’t get it, the singing was not all that great, and the whole display was just a walking disaster. Nuff said. 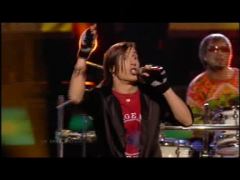 Needless to say this is an interesting entry; who would have thought that a punk group would come to Eurovision and feature an old lady that is banging on a drum? Well they did it, and as it would be proven in the future, Moldova would send the group again to Eurovision Song Contest 2011 in Düsseldorf. The song is not at all my style of enjoyment but people seemed to love it regardless as it essentially came second in it’s semi-final. 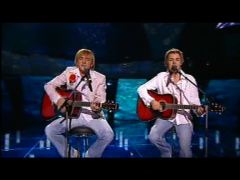 What do you get when you mix a couple of Latvians and an upbeat ballad about giving peace a chance and the war being over? An adorable combination of simplicity and music. Despite the obvious nasal voice and sometimes sketchy English pronunciation this is a very charming number where guitars are played, and sign language becomes a feature in the presentation. With a simple message of peace, and an adorable face this one went right to the final! 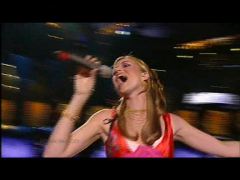 Nearly coming dead last this lovely ballad is not only well executed but is a classic in my book that really reverberates in my soul. It has an absolutely beautiful orchestration and background score that is only accentuated more-so by the beautiful voice of Lise Darly. Though sadly coming second to last in the semi-final, this is a favourite on my play-lists ever since. 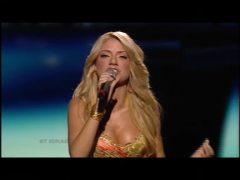 Largely regarded as an amazing song, it never really caught on with me largely due to the fact that the Hebrew language is very rough to listen to and doesn’t sit well with me. Though clad in beautiful clothing, with a beautiful voice, nothing can be done to sooth my soul unless the song were to be translated into a more suitable language. 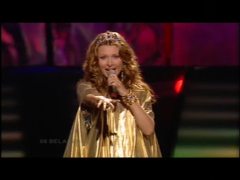 Originally chosen for the competition “Boys and Girls” was replaced by the song “Love Me Tonight” by Angelica and was tipped to be a favourite to qualify. With the strangest of deep timbered voices, and poor English pronunciation (though not by any stretch of the imagination the poorest of all time) this dance number featured (again) many costume changes and odd “showing off” by Angelica. Failing to qualify for the final, the hopes of Belarus being accepted by the European public seemed bleak, and even 7 years later remains equally as bleak. 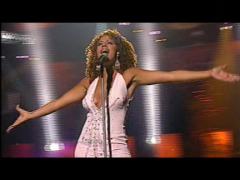 Though sported with the most Americanesque of Diva names, Glennis represented her nation with this power-ballad that reminded us that the power within is achieved by only when the diva belts out her notes. That made no sense, but really I didn’t know what else to say about this song, which is okay but not catchy enough to my ear by any stretch of the imagination. 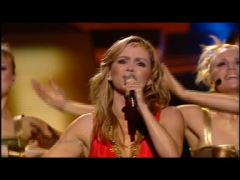 Though scorned in Jerusalem in 1999 by Charlotte Perrelli’s “Take Me To Your Heaven” and Iceland’s closest chance to winning by coming runner up, Selma returns to Eurovision with a superior quality and better act. Though better in overall quality than her 1999 entry, this one didn’t qualify and was oddly abandoned in the semi-final despite it’s awesome lyrics, tune, and performance. Sad as it may be, it’s disappointing but seems quite a bit of a curse of past winners or near-winners returning to the competition with disastrous results. 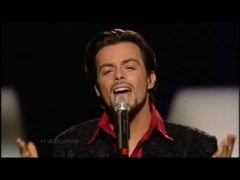 This song irritates me beyond belief. I believe that it’s due to the fact that the singer is part Portuguese. Now I have no prejudice against them, just their crap music that they send to the competition every year, and the strange sound of their language. Go back to Portugium, or whatever… 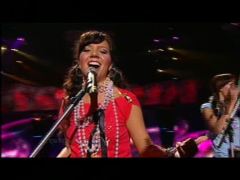 Estonians had a bit of a rough time in the early 2000’s despite having won the competition. It went downhill from there and didn’t pick up steam until more recently in the late 2000’s and this song is just a plain hot mess. They tried so hard to present a bunch of cute girls having fun and getting loud, but it really didn’t turn out good at all. It’s maybe fun to get up and dance with but is not a European winner by a long shot, thus failing to qualify. 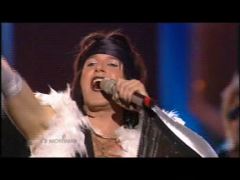 What can beat a Norwegian guy with a glam-hard-rock song that’s dressed up like a girl and can sing pretty well in falsetto? Well there are many things that could beat it, like schalger, but this entry was very popular and was an insta-qualify in my books. Come on come on come on, after all! 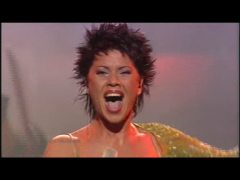 Perhaps one of the biggest mouths that I’ve ever seen, or one of the best songs I’ve ever heard this one was absolutely fantastic and had me at the very first “Let me Try!” Not only does she have a bitchin’ powerful voice and big lips, but her accompanying band Sistem with their banging on makeshift drums makes this a very enjoyable performance. Even a decade later I’m rocking out to this one, cause I’m givin’ it a try! 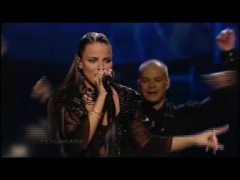 What does a Hungarian folk song do when it mixes with some awesomely choreographed number with some famous dancers? Well you get NOX and an upbeat song that was very popular and qualified as 5th place in the semi-final. I don’t really think that Hungarian diaspora had anything to do with this qualifying, I really think that it qualified because it was a good song and act even if nobody knew what they were saying! 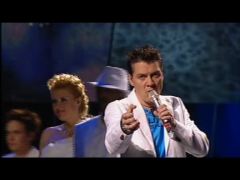 Why indeed? The song is a bit uninspired in my opinion and crashed out in the semi-final. It’s hardly surprising considering that poor guy has struggled in his attempt to become a professional musician. Though originally Norwegian, he tried to get into Eurovision by composing first for Norway during the 90’s, then qualifying (after two failed entries) for Finland into Eurovision (2002, 2004) and finally got in in 2005. Though after that it was still rough waters, struggling to qualify in Norway in 2006 and again in Finland in 2010 he crashed out of Swedish Idol in 2010 placing seventh place. The poor guy could just never get a break! 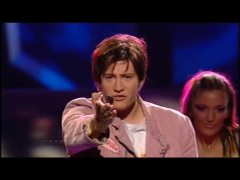 Martin tried to appeal to the masses by wearing a pink blaser and drumming on drums. He didn’t have the appeal of a boy band, but as a well established musical family, and a proficient drummer, the swaying of his lack of polish really hurt him despite qualifying in the top 10. It wasn’t really a good song to me, and annoyed me more than anything, and contrary to the title, didn’t make my day! 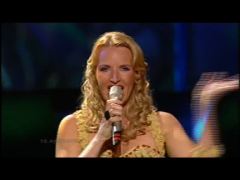 Coming in third last place in the competition, Andorra again struggled to send something to the competition that had any remembrance of good music. They try so hard to assert themselves as Catalan speaking and refusal to sing in any other language, the country would flop out of the competition in the following year with an overweight woman singing like a diva with strippers humping chairs, and then actually produced something decent with Gisela who was dressed like a God only knows what, but it was okay because she sang schlager. No jokes. 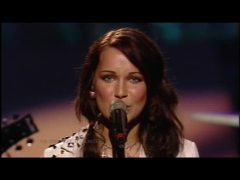 Estonia is well represented this year with this girl-band that provided the song and the competition with Cool Vibes. Though having failed to qualify for Estonia in 2003, they succeeded this year and did quite well for themselves. They tried again in Estonia in 2007 and failed but were quite popular in general as musicians! 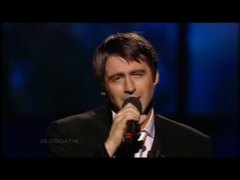 One of the songs that qualified that I didn’t understand at all. Though coming from a musical family and nearly representing Yugoslavia in 2000, he was accompanied by official folk dancers from Croatia. I just think it’s funny that they have to be “official” but his song about wolves dying alone scored oddly well in the top-4 qualifiers. The righting on the wall was not seen by me that year. 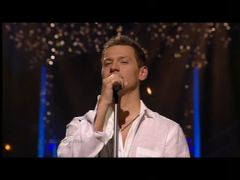 This strange country always seems to produce strange songs and performances. This one was more “mainstream” as they débuted in the competition this year, but still wasn’t enough to qualify them. Normally newcommers get a good vote first year in but this year, I found it a bit simple and though oddly charming in it’s own way not enough to win over anyones favour. Though popular in Bulgaria with many albums, it never really did anything outside it’s borders. 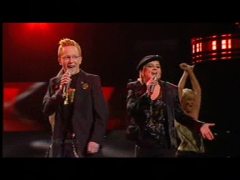 The world knows that I loathe gingers, so naturally this song was just a disaster waiting to happen. Though Ireland has a strong history of winning, the song “Love” was a burnout and a sad attempt by the country which was trying to shake it’s history of ballads. Though failure in this semi-final, and Joe’s inability to match with any clothing colours or skin tones, the song actually was quite popular in Ireland and became the theme song for popular DJs. Who knew? 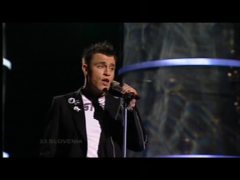 I had a strange thought while watching this song again, is it just me or do really short people always represent Slovenia? It’s just an observance that I had, because oddly the only other Slovene that I know happens to be quite short as well. Either way, this song didn’t really do much for me and is hardly memorable. He tried again in 2009 but failed to represent Slovenia. 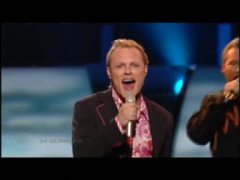 He’s talking to you, ya know? Well his lyrics and easy-tune managed to get him qualified 3rd in the semi-final, and his then non-existant social trend of hipsterism was pain to my eyes, but it’s Denmark so really it’s to be expected. Representing the long-standing tradition of Scandinavian excellence, of course! 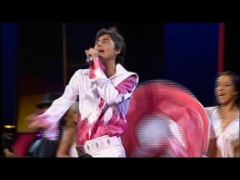 Poland has always been hit or miss for me, with heaps more misses than hits and this one was no exception. It didn’t sit well with me and the duet really didn’t sell their entry by any means. Narrowly avoiding qualification in 11th place, this song about the black haired girl will always be forgotten in my play-list.

And so that concludes the nostalgic review of 2005. In general it was a decent night, but the majority of the good songs were saved for the final which I can remember watching over and over and over and over and over, because it was one of the first live-feed streams on the internet. It was two years prior where I saw my first webcast, and for some reason completely missed out on Istanbul. I can’t recall why!