As per usual, the Andra Chansen (or Second Chance Round) took place this past weekend in Karlstad to decide the final two spots that go to the final of this years competition. Tough competition and changes in the qualification meant that there was a shorter and more “normal” feeling and not so much of the duel feeling as in past years. 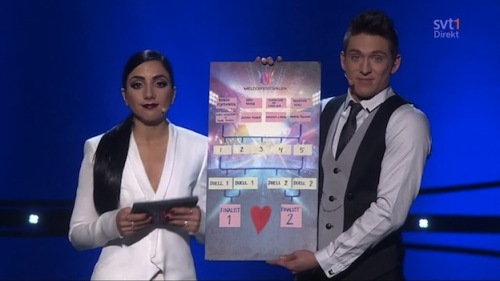 All eight songs performed, three were eliminated, and the remaining five were revoted, and the top four went into either duel-1, or duel-2 where their songs were performed again and televoted. Here are the results and my overall thoughts:

Unsurprisingly the winner of this one was Anton Ewald, who’s dance number brought him to tears and a complete inability to talk in the after-show. It was very touching yet very unprofessional in the sense that he couldn’t literally put any words together apart from “yes.” I think that the song is decent, but there were better songs in this competition, like for instance Caroline af Ugglas who’s song still is haunting me, and Cookies N Beans who crashed their burning flags and their chance for the final.

Duel 2: Robin Stjerberg – You vs. Martin Rolinski – In and out of love

A really surprise duel that resulted in Robin qualifying and Martin being disappointed with his amazing disco song. I really think that this was a mistake over all and was a result (like the first duel) of teeny-popper voting for the Idol stars. I don’t really think that Robin’s song was strong, nor was his vocal performance or looks. Martin’s song was more polished, more interesting, and more professional in all respects and fully deserved to go to the final. Having said that, the huge favourite for the second chance round was none other than Erik Segerstedt & Tone Damli who failed to even qualify for the four spots. As shocking as it was, I’m very disappointed, and fear that the voting was really flopped.

Overall this means that the final will be a sausage fest, with only one artist being female and the majority of entrants being single-male-singers (with the exception of State of Drama and Ravaillacz). Although doubtful that Louise Hoffsten will come out on top, I really think that the results may be a surprise despite SVT’s obvious promotion of Ulrik Munther being the favourite.

In general I think that the the final selected two songs were the poor choices, and I think that Caroline af Ugglas and Erik Segerstedt & Tone Damli were the right choices. However, next week we will figure out who will represent Sweden in the Eurovision Song Contest 2013 at home in Malmö. Fingers crossed for Louise Hoffsten, Ulrik Munther, or Yohio.