So it’s been about three weeks since I had injured myself during my training exercises. As it stands, I went to the hospital (seems like I’ve been there a lot lately… 8|) emergency room after the injury happened. I was admitted, wasn’t really checked into, and was shortly thereafter discharged with a sprained ankle.

I thought it was a horrible diagnosis so I immediately booked an appointment with my family doctor for another diagnosis. He was shocked that I was discharged (a little more than I was), and immediately knew that it was some sort of rupture of a tendon or ligament. The question is which one.

I said okay, that’s fine but when is my appointment? Of course I had to wait another two days to get an appointment, and then suddenly I found myself in the hospital again (yesterday) to have the procedure done. I was in there for about one hour, and after the sonographer had to call two other sonographers around to look, the radiologist doctor came around after being paged. They were all a bit baffled, but as soon as the doctor came around everything made sense. Thank God someone knows what is going on. 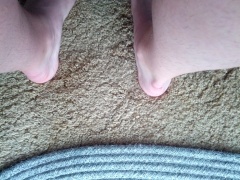 You can see above that the left ankle looks dramatically different than the right one. As it turns out the sonographer was looking for a tear in the spots where it’s most common, which didn’t occur. As seen, my Achilles tendon (yeah that really important one) had a rupture in the very proximal location, nearly where it attaches with the calf muscle. It’s very uncommon and that’s why it wasn’t being seen.

So after they chatted a little bit the doctor called down to the fracture clinic to ask if I could be admitted immediately to a consult. It was agreed that it had been far too long since the injury, I couldn’t wait four to six months to see a specialist. I made my way down to the fracture clinic with a referral note, and after twenty minutes of bureaucracy I had got to wait for a couple hours then saw the orthopaedic surgeon.

He was very professional and listened to what I had to say. He was quite surprised with my knowledge of anatomy, and it was obvious that he normally speaks to people that aren’t very bright. Judging how he was speaking to other patients, it’s not surprising in the least.

So we talked and he had a good laugh about how it’s a very odd place for the injury and that he’s never seen it himself in the span of 30 years that he practiced medicine. How great it feels to be a first. U-(

As the location of the injury is quite different that normal, there is absolutely no way to operate because a tendon is torn at a place where there is nothing to attach, so I’m on a “natural” non-operative path to hopefully develop scar tissue, rehabilitate it into tendon tissue, and have the Achilles tendon repair itself naturally.

We had a good laugh about how I didn’t really have much pain with it, and hear so much about people with the same types of injuries. We both agreed that I have a high pain tolerance and threshold and that it probably hurt a lot more than what I was feeling. So here’s hoping to natural habilitation and that in six months I’ll be able to walk again as normal.

It’s therefore a very depressing immobile time for me, which creates quite a debilitating situation given recent past events. However, no more pain for now, so prognosis is somewhat positive.