So the story continues with me approaching the end of the week whilst on holidays and the uneventfulness continued, with lots of rest as I couldn’t manage to wake up a lot. I ended up meeting a friend who lived outside of Philadelphia, and decided that it was easier for them to come in to the city than me to go out. We sat, along with another acquaintance, at a Belgian café and had some food (which was unbelievable and totally authentic; foh shizzles!). It was another friend that I met via an online community of which I’m apart, and we got along great. It was the first time in a long time that I met someone from the internet world that was something like what I was used to, but we had known each other for many years so it wasn’t too awkward. We didn’t stay out for too long as they had to get home to entertain family, but we took some photos for proof of our meeting and so that I could rub it in the other forum people’s faces. Oh yes they were jealous! I’m so stealthy.

Unfortunately it rained, and I got soaking wet (go figure), which seems to be a bit of an olde story. It was a welcome refreshing moment, because it had been so hot an humid and I always was walking around feeling disgusting. It rained forever and ever and I declined going out with my host to dance (despite love dancing) because I was so exhausted from the weather. 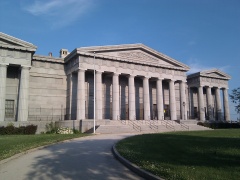 I stayed in and watched some films and researched some random topics on the internet such as 9/11 and all the legal battles that have been going on. I felt myself become more interested in world affairs because I actually had time to. Later that evening I decided to meet up with the zoo-keeper per our original organized time, which was nice. We just sort of walked around and got some ice cream and avoided getting mugged and/or attacked (cause we are obviously paranoid about that!). Some of the neighbours outside my host’s house were having a birthday party so it was quite large, and when I got home after an uneventful evening I found the host’s roommate who was packing because he sister had a baby and she needed to leave for Boston. It was sad for me because we got along great, and then I realized that I would have to spend alone time with the host and the boyfriend, which was highly awkward. I lucked out and fell asleep before anyone got home, and then ended up waking up later than the host left for work. I decided that I had to start packing and things for my flight the following day, and then went out to the park to lay around and soak up the sun whilst reading some novels and grammar manuals (I’m such a geeek! I love it!). I went out for dinner again to a more enthusiastic restaurant, and returned home to discover it was Saturday night and that staying in wasn’t a bad idea since I had to wake up early. My host agreed that he’d drive me to the airport the next day, so I didn’t have to take a train or anything, so all was good.

I went to bed and woke up the next morning early. Packed everything up and woke up my host at 10:45 as he said I should. He was still sleeping through his alarm that had been going on for about 2 hours, and luckily the boyfriend was either gone or never came home with him (I was so thankful to avoid the awkwardness of walking in on them). He woke up, and so I was circa 2.5 hours away from my flight, and he sat down on the sofa and was like “So I don’t think I can drive you to the airport. I realized that my insurance ran out a few days ago and I can’t risk further by driving an uninsured car, which is reposessed, and since I’m avoiding the authorities in a different state it’s better if I don’t drive at all.”

I was livid, and kept my shit together and asked “So then how can I get to the airport?” He said that a cab was only $20 and could catch it around the corner. It was a Sunday morning, and of course no cabs were outside, and he didn’t have any number of one to call. I think I was visibly agitated when luckily one stopped by. I thanked him, and wished him all the luck with his ‘problems’ and such. Off to the airport I was, after realizing it was actually a $40 charge. I was upset, but the cabbie was nice and we chatted. It was better than being late and missing my flight and being trapped in the dump. 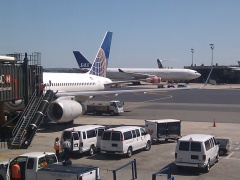 I got to the airport, did all the airport stuff, arrived in Newark NJ after a tiny 5 person plane with major turbulance took it’s 20 minute flight. Newark is a horrible airport as I couldn’t find food and/or somewhere to sit. The flight to Toronto was 45 mins away so I walked over to international destinations and talked Swedish with some Swedish people visiting (I’m Swedish btw!) so they were happy to find people around that could speak with them. They had very good English but were so self-conscious about their speaking. I ran off to my gate after they called for general boarding, and off I was to Toronto. I landed and went through customs quickly, but since I had to fill out the damn card and there were no pens around it was highly awkward and rushed. No searching, as I’m not a visible threat or minority (I guess) and I grabbed my bag to be picked up.

My mom had agreed to pick me up from the airport so I didn’t have to worry about more travel woes, but of course she doesn’t have a mobile phone, and she went to the wrong terminal. Two hours later she found a pay phone and called my mobile to discover how “duh” she was. We arrived home in the nice cool evening breeze and I went right to bed knowing that I’d have to be up at 5am for work on Monday morning. I was exhausted and unmotivated even enough not to watch the episode on my PVR from Desperate housewives! I was really out of it, clearly. The next day I woke up and bam I was at work again with a huge pile of stuff on my desk of things that other people couldn’t do and figured that they could dump on me. Even to this day, two full weeks later, I’m still behind by about 3 days…