And so the story becomes thrice the excitement with the next instalment of my adventures; entailing more walking around the city, more specifically up the main J.F.Kennedy Parkway, which has flags of the world along the edges. This leads to Logan Square where there is this huge fountain, and since it was sunny and I had been walking so much I decided to take a little lay on the grass there taking in the sun. It was so lovely, but I managed to take a nap, and wake up in a frenzy, fearing for my life. Why is this you ask? I was basically the only white in a sea of blacks, and since the society in Philly is pretty ‘ghetto’ and/or sort of backwards, I felt a lot uncomfortable. Lucky for me the Museum of Modern art was within a 10minute walk up the parkway, so I continued and spent the remainder of the afternoon soaking in true lovely culture and modern art that happens to bore me quite a bit as I prefer the more classical works. Perhaps I just don’t ‘get’ a dot on a canvas as being ‘art.’ 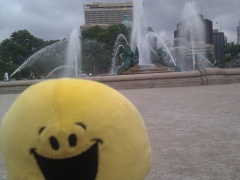 I walked out of the museum well rested, but low and behold it was pouring rain. I was about 15 city blocks away from my host, so I began the treck, getting soaking wet. People scoffed at me along the way, I turned the corner and walked for awhile finding myself in Chinatown. I realized halfway through China town, that it was a dodgy district and that I was going in the wrong direction. Damnit I said, and turned around bootin’ it in the opposite direction. The humidity along with the rain was killing me. I felt sticky and my skin was feeling so clammy and quite literally needed to stop and remind myself that humans basically lived in dirt for thousands of years. That’s how dirty I felt, it was making me crazy but the calm breaths and imaging dancing around in mud managed to make it bearable. I suppose you can interprit this as my ‘getting dirtaaaay’ phase on holidays; but I was to be mistaken.

It stopped raining and the humidity dried my soaking body in about 10 minutes. I arrived back home to find it quite late in the evening as the sun was setting. I wouldn’t be caught dead walking around the town in the dark as I felt very unsafe, but my host decided that he wanted to go out to the ‘gaybourhood’ in order to have some drinks and go to this bar with karaoke. I was sceptical and felt awkward because he had so many friends and I didn’t know anyone, but I talked to some random people who were sitting around (which is very out of character since I don’t talk to strangers like EVER). People started filtering out and there was just our ‘group’ and this lesbian girl singing showtunes. I had been looking through the ‘book’ for about two hours, and I finally convinced myself to sing some songs. Over the span of the next 2 hours, I sang 7 songs and became much more comfortable and confident (despite I was singing to basically nobody). This was also a bit of self-discovery as I hadn’t done karaoke since uni in the East Coast which I did with my music colleagues (and we rocked). I now need to find a place where there is karaoke in my little community of Newmarket (le sigh). So a few hours of being ignored by my host irritated me, but we walked home and then the roommate had BBQ Fries ready (awesomeness embodied). 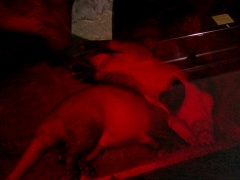 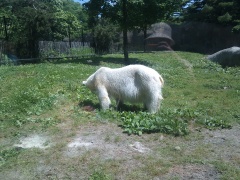 The sleep on the floor was horrible and I was anal about the mice, so I was getting next to no sleep. I could feel the humidity increase and suddenly I couldn’t sleep because I was laying and sweating like a pig. The sun soon rose and I got up; destination the Philadelphia Zoo (America’s First Zoo). This zoo was packed with kids with schools. I’d reckon about 1000 little ghetto kids running around terrorizing the chaperones. I did my round of the zoo seeing as much as I could. I realized that the heat was about 35C with 80% humidity so the luck I had dressed appropriately was fantastic. Little did I know that quickly I was soaking wet and the reapplication of SPF 50 made my skin feel disgusting and dirty. Suddenly around 2pm I went to grab an overpriced hot dog, and reflected on the small areas that the animals had to live in, compared to the huge exhibits in Toronto. I mean, the rhinos barely had enough room to walk in a circle. The giraffes were in a little square and barely looked fed. Plus the two hippos were in their “pen” which could barely fit the two of them. It made me pity the situation; especially the gorillas and orangutangs who have disturbingly similar human body language. You could tell they were bored and didn’t like to be spectacles. So I observed being as still as I could and tried to be compassionate and see myself in their situations. It brought me sadness. 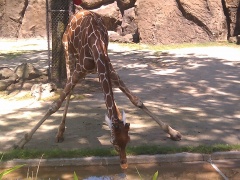 Suddenly the park was empty and there were about 20 people left in it. I realized that the kids took the buses home and that now I could go around and see everything without kids. I was disgusting feeling and felt like an elephant (which weren’t even there!!) had stepped on me. Highly dirty, highly unattractive and highly sunburnt. I benefitied from the trainers coming out and feeding the animals and cleaning their cages. They came over to talk to me in nearly all instances and I asked many questions about the animals. I got into the gorilla pavillon and there was a younger trainer there. I was asking about their behaviours and if they were always like that and were any more energetic. Suddenly I realized that we weren’t talking about the gorillas and then suddenly I got asked to give my number. Not only was I shocked and appauled, but I also was a bit offended that someone would come onto me in such a disgusting state. I quite literally felt like a bus had run me over, and then reversed onto me, and then continued on over the road bump. In any case, I obliged and didn’t expect anything. 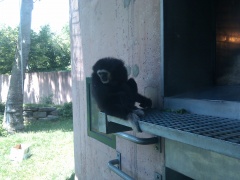 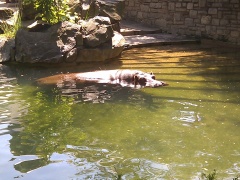 I headed back for the bus and then suddenly strangers were commenting on the bucket-hat I was wearing to shield me from the sun. I was put off and tried to be polite to people, but got on my bus and fell asleep getting into town. I limped around looking for a restaurant and then puckered down. Sitting down, feeling like, for a lack of better words complete shit, I ordered a Greek Salad and Fruit Salad to replenish the lost waters in me, and then my server did the exact same thing as the trainer. I was shocked an appalled and, again politely obliged. I ended up paying, giving a nice tip (hah!) and then walked home. I fell asleep at 7pm and was awoken at 9.30 by a phone call from none only than the trainer…