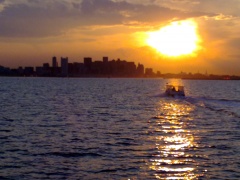 So whilst in Boston and additional stories that I forgot to mention; I was jammed into the backseat of the car across several people because I was more or less coerced to take a ride with them back from Cambridge to Boston. I realize that I’m admitting to committing a felony but it was in the USA, and you weren’t witness 😛 It was funny because the entire left hand side of my body ended up going numb, and ironically the entire right side of the guy I was predominantly laying on top of went numb too. We ended up trying to carry each other up the stairs of the hotel; it was by far the funniest thing that the concierges had ever seen (or so they said!) 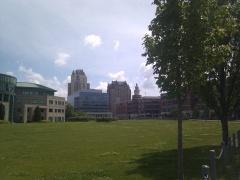 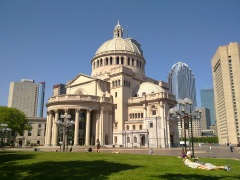 So after the jazz club brunch my friend drove me down to Providence RI where I sauntered around waiting for a train. People there are so nice and courteous. Very curious as to why I was there and what I was doing; it was such a lovely place and the weather was so perfect. 20°C and the sun warmed me right to the perfectness. Anyways, Amtrak train arrived and I was on my way through Rhode Island, Connecticut, New York City, New Jersey, and Pennsylvania. Someone sat next to me on the comfy train (much better than busses) and wasn’t chatty at all, until he needed to plug in his iPhone and accidentally woke me up. I didn’t really care, but I’ve never heard someone appologize so much for something. I was afraid he was going to start throwing money at me. Crazy Americans.

So we arrive into New York City and although I stayed on the train for the 20min ‘break’ about 90% of the people got off the train and then the new people got on. First observation is that the city made me feel dirty, even in the train station. Second is that the smell was disgusting and made me sort of feel sick. Then there were the people that loaded onto the train; they were so weird. All the people going to Connecticut and descending into New York were okay but the weird New Yorkers suddenly put me on edge for the remaining 1.5hrs to Philly.

Without conversation, I made it through the dodgy darkness of New Jersey, and despite the delay in Trenton, NJ I arrived into Philly unscathed, unviolated, and met up with another friend of mine. He was happy to see me and it was weird to finally see him in real life, I mean cause I have known him for so many years and I couldn’t help but laugh and say “Hey look; you’re real!” He took me to get something to eat as it was late and I ended up getting him a meal because unbeknownst to me, he’s in quite a sticky financial situation. In fact, his whole life is pretty much in shambles and goes as far as to avoiding legal troubles. He talked to me about troubles in his ‘paradise’ (which was basically him having issues with his new boyfriend). We went home, and I met his roommate and she was so funky and cool. We chatted until I started to fall asleep and then I fell asleep on the couch as the air-mattress wasn’t available from the neighbour for a few days. 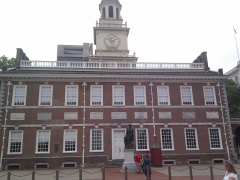 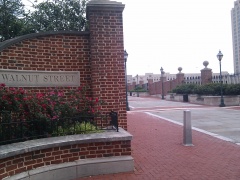 Turns out that the sofa was far too small for me, and painfully uncomfortable so I transfered to the floor with cushions. Then I realized that they had a mouse problem ( EW ! ) so I struggled on the couch with disgust. I woke up the next day and decided to head down to walk around the city. I walked about 10km total and saw the entire old town after stopping into the Visitors Centre to grab myself a map. 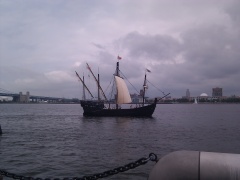 I got painfully lost, but managed to follow the patterns of stress (simple 1st 2nd 3rd Streets all originating from the port!) I ran into some people at the port (Delaware River) who were swearing at Jersey (at the other side) and then realized that the people were sort of freaking me out and ran back to the flat. My friend, wasn’t really in a good mood cause his ex cut off his phone line, so he was moping around and I watched some Will & Grace episodes with him. I fell asleep on his bed (oops!) and snuggled the stuffed animal of Sitch (From Disney’s Lilo & Stich). I have this thing, where I visit people that I like, that I always bring a stuffed animal for them to remember me by… random but it brings me warm fuzzies.

Above you can see Stich… 🙂