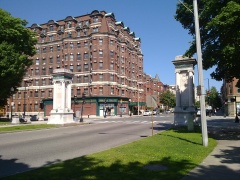 So my holiday started out with going to the bus station in Toronto a bit early for the outbound journey to Boston. As it turns out and that I wasn’t aware of is that the first bus was actually destined for New York City, and thus were about 200 people queued up at the terminal. Lucky for me I got into line 2 hours early and was the 38th of 45 passengers to board. The crossing of the border at 2am was horrible and I wanted to poke out the eyes of the customs officer who was far too suspicious of me for no particular reason. The whole trip was to go visit a group of friends from an internet community I’ve been apart of for about 6 years; and we were thus having an administrator meeting and a sort of meet-n-greet trip for the weekend. So I arrived into Boston the next day in the afternoon fine and met up with my mates and went to dinner and a cruise. They were all much older than I was, which made things kind of awkward, as the closest person to my age was 28. Luckily I got along with him, and we had a good bundle of laughs about being so ‘young.’ 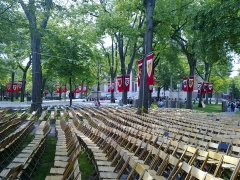 Boston was amazing as we visited Harvard University during commencement, so with all the banners and the colours / flowers it was so beautiful. In fact I took so many photos of flowers because the weather was so lovely. The city of Boston, which I’ve been to before when I was a child was so lovely and fantastic. I could totally see myself living there (and I’ve never said anything like that about a large city, nor anywhere in the USA). It’s such an open minded and intellectual area, and yet despite being a city, is very pretty with lots of nature and such. MIT was an awesome campus, and we had the most amazing pizza ever at this famous restaurant. So we were deciding what we wanted to do, and the ‘older’ members at 22h00 decided that they wanted to go back to their hotels, and of course I was bundled with energy and it was a Saturday night; so I proposed that us youngins (the British guy and myself) go out for a drink and hang out for awhile. I ended up clicking with a few of the people a lot more than I thought I would, as I was a skeptical given our different origins and experiences and likes and dislikes for instance. 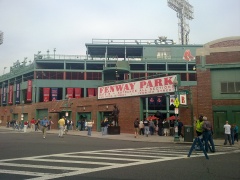 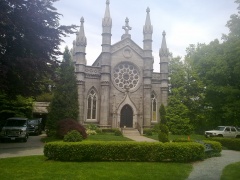 So all was good and of course I had a horrible hangover, but being the dedicated person that I am, go for a run in the morning (even on vacation – how’s that for dedication!?). Lucky for me in Boston there is the Charles River to run down, but to get there I had to go along the main road. So there I was chuggin’ along, when I made a turn to go towards Fenway Park (to take some photos) and then a police officer on the street started waving me down and yelling “GO GO GO! YOU CAN DO IT!” and I was thinking to myself “wtf?!” then behind me I heard some cars and some more police and there was a runner behind them. Turns out that I accidentally joined a fun-run-marathon and everyone thought I was the leader and I was almost at the finish line. So I headed a different direction, then some other cops came and tried to block me to make me go to the finish line but I had to tell them that I wasn’t a participant! LOL It was so much stress for a 9am run on vacation; but I got my pictures and on my return trip the officers laughed at me and wished me a lovely day. Given my past experiences with officers and/or fire personnel, this was the most positive. Don’t get me wrong, I have nothing against professions, but every person I’ve encountered in Canada seems to avoid eye-contact and appear so cold. 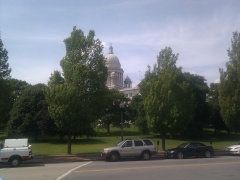 Anyways, we went to a jazz club for a brunch and omg Americans eat so much it’s disgusting. We sort of debriefed and then after a friend in the group drove me down to Providence, RI as he lives right on the border of Massachusetts and didn’t mind. In fact he insisted; which was very generous. So I got on the train towards Philadelphia, my final destination. New York City, passing through made me feel dirty and gross; but luckily it was only a 20 minute layover. I finally got to Philly and my friend that I’ve known forever but never met, picked me up.