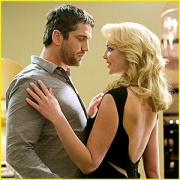 I went to the cinema, yet again after a little trip to Upper Canada Mall. I bought too much unescessary stuff, as opposed to the things that I actually needed. Tragic as always, but at least my skin will be nice!

I saw The Ugly Truth in the cinema, after slaving my ass all the way up to Green Lane, and feeling like I’m stalking Waterboy. I really do think that he thinks that I’m stalking him, which is partially true, but I’m not doing it in ernest. I think Michael and Danielle are full of shit, and I’m wasting my time living vicariously through other people. Anyways…

The film was hillarious, and I found the little innuendos constantly entertaining. I love Katherine Heigl, and I drool at Gerard Butler. It’s just a really hawt film, which kept me laughing the entire way through. I feel that I’m a bit like her character; high strung, neurotic, and totally holding out for something that doesn’t exist. On the other hand, I’m also the bitter man who’s got no faith in anything at all.

The truth really is ugly, don’t you think!?