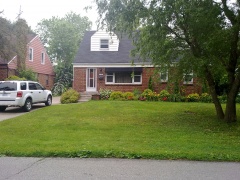 Prompted by an unfortunate event in the Rees family, the passing of my uncle Neil Rees to ALS-disease, I departed for Windsor Ontario at 1am from the Toronto Bus Terminal. Arrival in Windsor at 05.30 day following Canada Day, and off we were to the funeral, but before that we stopped in to Grandma-Rees’ old house which is at 3040 Church St.! It’s the beloved place where Alison, Cameron and I would pass our summer days pretending to be figure skaters like Josée Chouinard on the grass and completing out triple-axels.

Who could forget moments like this, but unfortunately since her death a few years ago the house was obviously sold and a new family moved in. Memories of aunt Valerie’s myriad of strange boyfriends will remain in the nostalgic moments that breed in our minds. One of the favourite moments were Christmas mornings with Grandma Rees smoking like she had nothing else to do, or the forbidden kitchen whilst the door was closed, or the furry basement carpet, or old television that was against the window, or even the spare bedroom that I slept in and played lego with Ali, which I think is the Persian one. Regardless, these moments are embedded in our minds!