On day three, we made our way around the town, as the sun was shining and everything was pretty and lit with the warmth that we all love so much. I got to see all the castles, and churches, and the major buildings of the city. It must be noted that when one says city, by Finnish standards there is no such thing. Not even the capitol city qualifies for being a city according to European and International standards. The greater Helsinki area is too large, as they expanded it to be Vantaa and Espoo in order to bring it to city status; project failed of course.

So I saw the church, where there was either a wedding going on, or some really happy funeral, or baptism. I never realised that people could get baptised, but given the low amount of religious people in the region it’s highly unlikely. In any case we continued on to see some statues of famous unknown German-sounding, but really Swedish politicians or generals, but then I got an idea. I love train stations, and the Finnish word for it, but also I needed to go potty so we walked to the train station and I saw where I was a few years in the past (without knowing it of course). For those of whom actually follow my blog, you’ll remember that it was in Oulu that I made a train connection coming from Kemi towards Helsinki with my “friend” or rather loose acquaintance, Ilja. 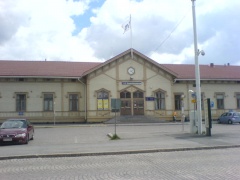 Thankfully I didn’t run in to him at all, since I think he came from Oulu and was studying in Helsinki. It’s a small town, but no mishaps or confusions in regards to seeing people I recognise. Having an undying passion for train stations, and as well as national broadcasting buildings, we, with the help of Juha-Matti, via mobile phone, set out to find the YLE offices in Oulu. It’s a tiny building that’s ironically called Tecknopolis. We continued walking to the Gigganti, which of course is a technology store as I decided that I wanted to buy a new mobile phone and wanted to look at some models. Stockman’s has a lovely selection but only the Nokia main branded ones are able to be tested.

Why did I decided to get a mobile phone in Finland? Well for starters I wanted to try out a Nokia, and second of all all mobile phones in Finland come unlocked and it’s illegal to sell them (without a subscription) with a SIM-lock. Even if you have a plan, after two years the company is forced to give you the code to unlock the phone. I love that idea, it’s the greatest thing ever, I think! So everything was perfect and I started taking notes on what I might like or not.

The day ended more or less with us walking around and me taking photos with some statues, and then the complete and utter exhaustion that is taken over the body. This can be noted as my host sneakily took a photo of me while I was laying on the bed. How devilish and sly, him! We watched some videos, ate burned popcorn, drank Pepsi-Max (no sugar!!) and then went to bed; two separated at birth twins, reunited (despite being born in different years!) Our dramas no longer lasting, and a great closeness therefound thenceforth.