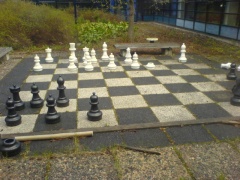 We woke up the next day at some God-awful hour and made our way back into the awesomeness of Oulu. We walked around as it had rained before, and decided to check out the awesome cafés (one of which my host’s godparents own), and had some nice tea, coffee, hot chocolate and resisted taking cakes. The godparents were so cute and kind, and Marija was so surprised to know that I speak English and Swedish both, funny things, yes yes yes. In any case, we continued our tour of Stockmans (which of course is the classy Finnish-national store that’s ironically bilingual, so I had no problems there!) People wear name-tags and identify which languages they speak (and it’s really true about their levels as they have tests to verify it!) 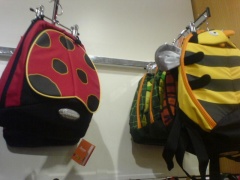 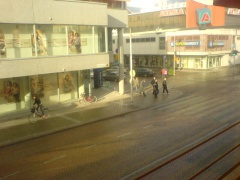 We walked around some more and I was shown the city. We more or less did walking of everything, and had a gay old time. We met up with Elina and Noora in the morning at the university to have some food. Noora was feeling sick, and Elina was nervous about going to Rome with Noora. They had no plans, hahah, except drinking no doubt! haha. I got a tour of the university (which looks just like a factory with funky colours). I met some of his colleagues which were wall nerds, and we walked around to see the campus. It’s quite a small university, and like everywhere in Scandinavia, on the inside it’s so warm you might as well wear shorts and a t-shirt!

We chilled, and walked back into town and did nothing special. Spending time with friends, is one of the best things that one can do. I attest to it being true, of course. At this point I decided that Stockmans was awesome and Robert’s café, even better, because we were obliged to go back and have cakes on godparents request. I think that if my host could have decided, he would want to go there every day of the week. He flirts with the people that work there also, so it’s quite amusing to watch to see what’s going on and how people react.