Well I’ve departed Caen for good, and after nearly two weeks of packing all of my stuff into suitcases, throwing a bunch of it out, and giving a bunch of it to needy people I’ve managed to put my life into one oversized suitcase, and a tennis bag. It’s all heavy as fuck and since I’ve decided to come to Sweden for a few weeks before going back to Canada, I had to bring everything with me. My flight leaves for Buffalo on May 31st and well it will be a sad moment of course!

In any case, since Caen is a pain in the ass to get from for flights going out of Charles de Gaulle Airport in Paris I left the night before to visit Marie before leaving la France again. I got there, no problems but of course it was a bitch with my internet services, and the metro was rush hour so I wanted to shoot myself in the face. The night was okay and we talked a lot and watched Desperate Housewives before I left at 7:15 the next morning, during rush hour again. The metro was packed and with my luggage it was a pain. 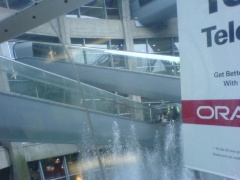 I made it to Opéra to take the RossiyBus to the airport, and I got nervouse becasue it was taking a lot longer than I thought and I was sort of late. Upon paniced arrival at the airport it was all okay since all flights were delayed due to fog, go me! I checked my luggage and it turned out to be 24kg (only 4kg over w00t!) and then got something to eat and talked with this half-French, half-Swedish family. The woman came from Upper Normandy and was really impressed with the fact that I spoke French so well (and quickly). Ha! I bid them adieu and went to my gate where they seemed to not speak French at all (funny that). The delays created the absoute worst situation ever. All these gates with flights going to Stockholm, Oslo, Copenhagen, Talinn, Helsinki all with delays and thus there were no seats left. There were people piled on the floors and on the windows; it was creepy. I grabbed a paper and chilled for awhile. The flight was long but lovely considering the lovely staff at SAS, who’s names were Marie, Bengt Holm, and unknown older woman. They were flirty and their outfits were far too tight. I’ve decided to grow my hair out to be like Bengt’s, as it was lovely. 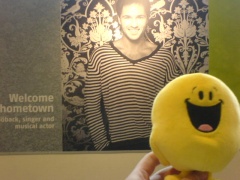 I arrived at Arlanda and immediately felt like home, and the signs welcome us. Welcome to Stockholm, welcome home! The airport was empty except for our Boeign 747 flight, and as you can see nobody is around, and nothing was going on. Mr. Happy made a triumphant return, taking a photo with Peter Jöback, my teasingly apparent twin (according to Daniel). Do you see the resemblance?

In any case, I took a photo and everyone else was laughing at me and were amused by my crazyness. I’m glad that the Swedes can take it so lovely, especially after a flight that featured the woman across from me having a panic attack during takeoff and landing. I’d like also to thank the people on my flight for not clapping, as obviously the pilots know what they are doing! 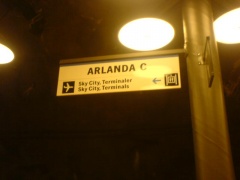 I got into the airport, got my train ticket for the Upplands Lokalträffik, Upptåget, which for those that aren’t swedophone, it’s the commuter train from Uppsala Väsby to Gävle. Itw as comfy and modern, but the terminal for waiting was quite cold! I got into Uppsala with my luggage and made it to meet Arash and take my luggage to his nation, which is basically a student organisation like fraternaties but are completly informal and fun! Turns out that I’m awesome and know so many people that nobody cares cause I’m awesome! So I’m back in the dorms, and into a really nice flat which is a bit cramped. I met Henrik, the flatmate, and the others that were around, and since I arrived on a Thursday it’s the waffle and soup day, so I helped serve that and brushed up on my Swedish, which had gone unused for awhile.