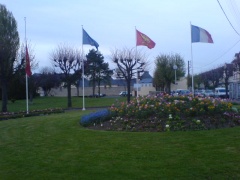 Another Couchsurfing event this week. This time we went to a tiny little village in Normandy called Dives-sur-Mer, where we saw a film at the theater. I ended up experiencing something that I’ve never quite had the chance. When people have showings that are special, apparently it’s accompanied by coucil-members from the towns as well as a debate. This floored me. I had Ariane, a German surfer with me, so we decided to pass the time in the countryside, and not in the flat because the weather was iffy. 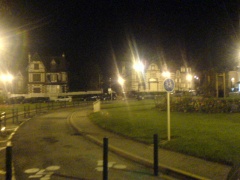 The film we saw was Nos enfants nous accusons which is all about pesticide usage in France and how we should be eating more biological foods. Basically it was a scary documentary look at how OGMs affect us in many ways, and how it’s not so much affecting us, but rather our offspring, altering our genetics and making us even more suseptable to further disease. Main message of the film is that the food costs a little more, but it’s worth it for the end. The sad fact is that if we’ve already been eating it, then we are too late for the next generation.

What else can I say really than the film was okay, but painfully long, and then when we were done my patience was worn thin with the debate that dragged on. It featured a smokey woman who sounded like a man saying that we are all going to die anyways. Good stuff, good stuff. Afterwards we went to the neighbouring village of Cabourg for a little drink. Population 7’000 or so but the town is bustling with a bunch of very gay patrons at the bars. The bar we went to has the most expensive drinks I’ve ever seen (minimum 10 each) which is really bad! What I chose was far too strong and left me with a hangover the next day; damn that one drink!