As planned, but delayed due to normal Caennais weather (rain rain rain), our Couchsurfing activites for the weekend continued with the planned tour of the American D-Day Beaches (Omaha etc.). I went to the market early, as I didn’t have to host or pick up the German, Canadian, or American Caitlin as planned, got my food for the day and met at Patrice’s house up near the port. We chit chatted for awhile and I got to know Laura, Kevin’s friend, a little better (as she’s a bit shy). We then set off in our four, officially marked Couchsurfing cars, to La Cambe which is the German War Cemetery. After walking through the lovely gardens, we went off to Pointe du Hoc, where the rangers attacked at Omaha Beach. The place was like covered with craters and crazy to imagine how much bombing went on. In the photo you can see Kevin, Laura, Sarah, Gaëtan, Tim, and our guide Patrice. 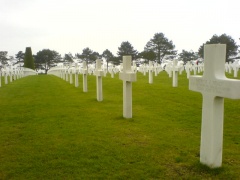 After the cliffs we descended into Omaha beach and the American War Memorials and Cemeteries which are located in Vierville-sur-Mer, and Colleville-sur-Mer, respectively . All I can say is that it’s typically American, and very glorified. There are statues, and marble al around, and despite it’s massive size, it’s still a little bit over the top. However, I recognise that it’s an important part of history, and that many Americans died for freedom. Just I don’t think they need half naked statues around a cemetery depicting that! I was most impressed with the Jewish graves that were listed, and with a pretty Star of David, and thus were found intersperced through the normal crosses. I’ve also never seen so many people there, and this isn’t even in high season, so I’m told! 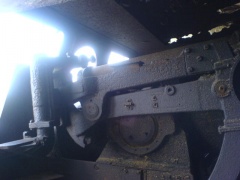 As we were leaving, we had to say our goodbyes to Kevin and Laura who were leaving for Toulouse on train and had to go back to Caen really quick, so with tears in my eyes, I said goodbye. After all, we had spent the beter part of 5 days together hanging out and making funny jokes about this or that! And so they were off, and we went on to our next destination Longues-sur-Mer which is where the Germans had some outposts and some ruins of the fighting. As we were exploring, we noticed the fog that was approaching and on the water the visibility was nearly 0, especially weird because the sun was out. That meant we had to skip our final destination, which was Arromanches-sur-Mer, because the fog made it impossible even to drive through the countryside.

And so we returned back to chez Patrice, and we had an apéro and some of us stayed for dinner. I took Stacey and Tim back to my flat and got them settled. They were incredibly polite and fun, and even Tim and I have an inside joke about how I can’t fly west, and I know that he’s never going to live it down! He’s got such a good sense of humour, and since Stacey is from a farm in Australia she has tons of stories about kangaroos and such! We both conceeded that we could never live in each other’s country because by our standards they are both deathtraps in different ways!

I took them on a tour of the churches, and gave them history lessons (ha!) about Normand and France vs. England. I’m surprised I knew so much, and then I dropped them off at the train station for their ongoing journey. Perhaps I shall stop in to see Tim in Jönköping, if I get a chance!