One or so day a month, Norman weather becomes lovely and the sun brims through the cloudy skies and people are able to profit best from the lovely weather. It’s very rare, I tell you. And so when it happens one must make the best of it, and so I decided to go for a walk. This walk became monstrous, but luckily I had a map with me to guide me. I departed at approximately 14.00 after a day of slothing, and returned at nightfall.

I have lived in Caen for awhile but have yet to see the outskirts, so I decided that my holidays would be a good exploratory method to my madness and I plan to visit all the suburbs, at least briefly! 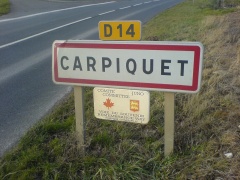 I walked outside my house, and down the long street rue Caponière into a little village outside of Caen, Bretteville-sur-Odon. I was looking for a bakery, which I never found as it seemed like a ghost town, but decided to head north into Carpiquet (where the airport is found). I took the D14, which was probably illegal, and passed by the 18e army base. I think I trespassed? but really I’m not sure. What do I see? Nothing but highway and fields, that aren’t cultivated. It was muddy and gross, and after probably 3km of walking and seeing nothing but cars honking at me on the highway, I arrived into Carpiquet, a small town to the North-West of the city. It really had nothing and I left and headed back into Caen not before meeting a little dinosaur and dodgy people.

However in Carpiquet I came across a lot of mention of Canada, and even a Canadian flag flowing in the wind next to the French one. I took a photo which turned out really well, in hopes that my mother would be proud to see it. So I managed to make it back into Caen without being murdered, but not before stopping in Belle-Vue-Carpiquet which was quite boring also. I totally thought there would be more exciting things in Normandy, but I guess once you leave Caen there really isn’t anything! Except a dinosaur and a place called Festyland. Feel free to click the link and check out something that embarrasses me as a resident of Caen.

I continued on my way, passing the SCNF tracks that go towards Bayeux and Cherbourg-Octeville, ghetto tracks baby. Love it! I do have some general comments about the North-Western suburbs. Where the hell are your bakeries? I was walking for 14km total, and I couldn’t find a bloody bakery or patisserie until I arrived back in Caen. What the hell is with that?

Bottom line, 14km walk is a killer on the legs, but oh so adventurous!