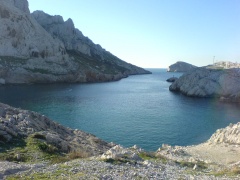 The Monday sun rose upon our faces, through the volets into my room. The sun has not stopped shining since I arrived, and the weather from the south makes me so content, the idea of returning to the dark and gloomy Normandy makes me die a little bit inside. Cédric had a knee-specialist appointment in the 8e of Marseille, so Agnès showed me around a little bit of the city. After going around the coast, all of a sudden, she thought of something that she could show me, which turned out to be wonderful. What was it that she decided on? To cross the city to the other side, and take me to La Baie des Seignes, which is affectionately called Monkey Bay, in English translation. It is a the coast on the south side, which is a bunch of old ruins and islands off the coast. From there we climbed to the top, saw the massive amounts of pollution that were there, and then Cédric called to tell us that he had finished (already). We went back into the city to pick him us, he showed us his grand-mother’s old house, and then we returned to the village, not before running some errands in town to get some Christmas gifts.

Angès had to develop some photos, buy some presents, and Cédric needed to do some stuff as well. The Auchan was packed with crazy Marseillais people searching for gifts at the last minute, and surprisingly there were full shelves and such the entire time! I grabbed some cards and face cream before we checked out. It’s apparently really funny that I buy face cream to prevent wrinkles and discolouring. Cédric mocks me every moment that he can about it, and the only explanation that I can offer to him is that I’m not so gifted in the looks department, so anything to help me look more normal than I am is necessary. We aren’t all as blessed as him to be so gifted with both intelligence and good looks.

So we grabbed Daddy a nice watch on the way out too, and a toothbrush, which seems to be the only thing that I had forgotten in my huge baggage. We returned back to get some bread, after getting a lecture about never leaving stuff in the car because it’s Marseille (moreso Aubagne) and people there go around looking into cars to steal stuff. My only response to this was that I have nothing of value, so if they want to take my scarf then they are more than welcome to because it would just be justified in the way that I’m treated by the world.