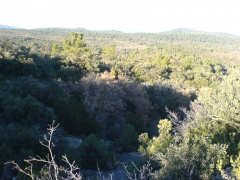 Day two in the south, and already I’ve been coerced into being crazy French. After the evening at Dominque and Fabrice, we were going to meet them and another family friend to go hiking in the mountains. Mother, Father, Agnès, Cédric and I departed for Sainte-Baume, where we ate a little meal and then we went up into the mountains in search of holly. It’s a tradition that they have been doing since they were kids, so I was happy to take part. It had snowed in the mountains, so after illegally crossing into private property and nearly getting lost (at least in my opinion) we succeeded in finding very minimal amounts of holly. I never saw the real stuff before so it’s quite exciting. I was a “killer” with Mathieu (different one), and Cédric. The others sat around in the rocks and found some herbs and such.

We met for another little meal, with tea, cookies, and wine and such. Lots of photos were taking, we had a good laugh, and then decided to head back into the town. The decent was quite left-right and apparently often brings people to be sick. I am fine, as the only thing that goes poorly is boats for me. We had a beautiful sunset, and despite everyone complaining it was freezing cold, I rested without a jacket the entire day (as it was around 10-15°C). The sunset was beautiful, and it made me smile. A lot of little stories were shared, and despite being crammed into a little Renault car, we managed to get back home. I visited Angès’ flat which is right next door, and then we went in for dinner and tea. As usual we are well fed, and then I watched a monument in French culture, Les Bronzés font du ski, which was on TV, being a Sunday night and having tons of shit to watch on! I scattered off to bed, again quite tired from the day outside in the wilderness.