What does living in the French Republic mean exactly?  It means the same thing that it does in every other republic in the world. People have rights. People have rights, despite their age, race, religion, or gender. And the French, among others decided that they want to exercise their rights a little bit more than other people. More specifically they like to exercise their right to go on strike. But who would think that students, under-aged citizens, can walk out on classes without anyone saying or doing anything? The students, are on strike. 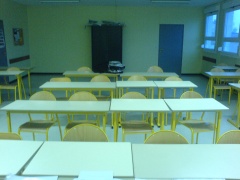 I went to school on Tuesday, looking forward to my love students in 2deDTB, TGEN, and 2deEuro classes. What I found, was empty classrooms, and students rioting outside the school. I was able to get in, via the teachers entrance, and was thenceforth trapped until after lunch. My students, despite being the age of fifteen and clearly unable to understand educational reforms, have decided to walk out on classes in protest. Around the school, Lycée Technique Jules Verne in Mondeville, they have set up barricades and prevented me from exiting despite being a teacher. What did I do? Climbed a fence like a freak, in order to get to Lycée Charles de Gaulle in time. I did, but found students striking there also. 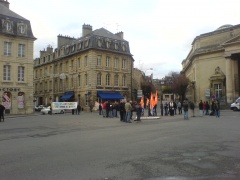 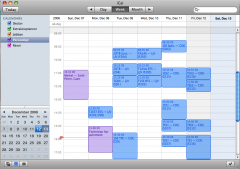 This continued from Tuesday until Friday. I went to classes each day awaiting students, waking up early, having lesson plans prepared, and no students. They have all taken to the streets in protest, and by consequent I’ve got nothing better to do than sit around and read cheesy novels, or listen to people bitch and complain about the current economic problems. In order to better spend my time, I took a walk around the city looking for presents, and organising myself in appropriate manners. What did I find? People throwing cherry bombs at me, interuptions in transport, and harrasment because of the strikes. I wasn’t even involved in them at all and I nearly took someone’s eye out because a cherry bomb exploded near my foot. It took me 1.5hr to get from the train station, to my house, because of traffic problems. A journey that usually takes 15 minutes, took six times longer. I’m not impressed. I believe in expression of freedom, but education is paramount.

In the above calendar, extracted from my iCal, and Google Calendar, outlines my week. Please note that everything in blue are my classes, and I didn’t have a single one of them… at all.

What do I have to say to students? Go back to classes, bitches. I’m bored, and I want to teach you. Otherwise you will become stupid and useless, ’nuff said!