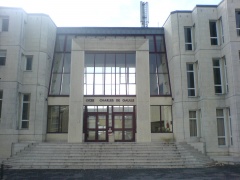 This is my education institution that I work at. It’s modern, and when I say modern, I mean it’s one hell of a lot more modern than even SWMSS was at it’s opening. Everything feels so fresh and new, despite the fact that the school has been open for quite a long time.

I filled in my administration forms and the secretary kept saying how lovely and wonderful I spoke French. All of the other foreign people that she had to deal with didn’t understand anything, or were just rubbish. This made me smile. I already impressed the administration people, who, like other people in offices, are so heinously lazy you have no idea. “I have too much work to do” should replace the national motto. It makes me laugh.

Soon I will being my full time working, having a nice little salary to fill my already existing French bank account at BNP Paribas. Again the woman at the office was surprised that I already had one. Guess I was the uber smart one to keep it open. Take that world, bwhaha!

I met some of my colleagues in the English department, who all speak English on a varying degree of comfortability. Most are okay, and decently equipped with skills, but the thing that has shocked me most is that the entire faculty has been so accepting and friendly towards me. When I am bored I just go to the staff room and hang out and they chat me up, literally. They even are surprised that I can express myself so eloquently. I can’t participate in theological or political conversations (obviously) but I listen and smile as other non-political people do. I truly love them, they make me so happy!