Since my re-arrival in France there have been many a thing to happen to me. The first and probably the most flagrant is the fact that here the damn keyboard is different and thus I have not been exposed to it truly before. Since I have been practically living at the internet café (the only one in the city), I must use the keyboard there and thus as I am writing this I am getting confused with the AZERTY layout that it has. Damn the French!!

In other news, if you haven’t already guessed, I have once again moved. Having finished my university education, I have embarked on a journey to teach French high school children how to speak English. Seems quite funny doesn’t it? It truly is, but it’s heaps more rewarding that one can realise, even for the kids who don’t speak anything.

I moved here in late September, into a cute little apartment owned by the mother of one of teachers at my school. Luckily I was able to secure somewhere, otherwise I would have been living on the street. I share the flat, which has two bedrooms, a kitchen, a living room, an entrée, and bathroom, with a German assistant who comes from Franconia. God knows where that is, but its somewhere north of Bavaria, or so I’m lead to believe. 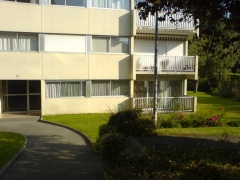 The building is lovely in a nice little enclose, which makes me feel a hell of a lot more posh than I actually am. It’s a quite neighbourhood, and there is even a gardener who takes care of the roses outside our porch, no jokes! She’s even more greenthumbed than my mother, and would even give Aunt Sharon a good run for her money! In any case, we live on the main floor and its pretty lame but the photos will mostly explain what is the shizzle. It’s kind of weird because the home hasn’t been lived in for about 1.5 years, as the mother of the colleague went to an old age home, so the first few nights I couldn’t sleep because of allergies. The mystery as to why I couldn’t was discovered when I decided to overhaul the entire room. I found more dust in the room than I have ever seen in my entire life. The dust under the bed in the “rafters” was nearly 2cm thick, and I’m not even joking. 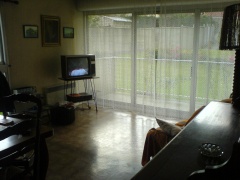 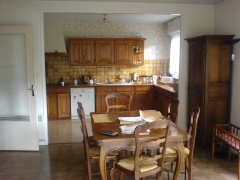 Something really cool is that I have the room of the old woman, so my bed is one of those crazy recliner ones that goes up and down electronically. It makes me feel special, but it’s a bitch and a half to clean because there are all these little places where dust and such can go. Oh well!

In general it’s different than living with my old housemates, mostly because he hasn’t lived away from home before and despite being older than me, is quite unindependant. I hate being followed around by strange, odd smelling, and loudly breathing people, but I am as polite as humanly possible. The less amount of tension the better.

The major struggle of my life is the fact that I am disconnected from the world. The internet café cheats us out of our money because the computers are so slow, and they charge an arm and a leg. I figure that most of the regulars are sleeping with the young technicians just to get a deal. I will have to look into this possibility. I’m joking, or am I? I am in the process of getting an internet connection / fixed phone line here at home, but the stupid company messed it up the first time and thus there is a long delay. I’ve got a friend who is helping with the administration stuff, since he knows the system at a little bit better. We shall see what happens, but when there are more updates, then you will know that again I have internet and I am not left off from the world outside, because that is what it feels like for me right now!